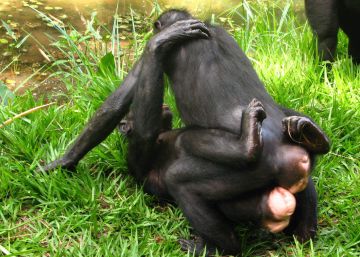 Bonobos are popularly known like the Japanese primates because of their carefree relationships, much less aggressive than those of their cousins, chimpanzees, in which aggressions are scarce, generosity with strangers is spontaneous and casual sex is common: a very pleasant vehicle to reaffirm ties and relax social tensions. These sexual relations are habitual, also between bonobos of the same sex, especially among the females of the same community. The herds of bonobos are peaceful and the role of the females is much more decisive, because they establish alliances between them that cut off from the roots any violent attempt that the males could try, bigger than them. But until now, the role of sex between them has not been studied in detail. A recently published study offers interesting clues because it directly links these homosexual episodes with the strength of female bonds.

Seen from the perspective of the evolution of great apes, including humans, it helps to understand the role of sex, also the homosexual, as a pleasant social tool. "Sexual behavior between same-sex individuals is widespread in animals, suggesting that it provides benefits. However, until now it has been difficult to determine what these benefits might be," warns primatologist Liza Moscovice. In addition to bonobos, there is also evidence of a link between homosexual behavior and greater cooperation between subjects in other species with highly developed brains to respond to complex social relationships, such as dolphins and humans. This suggests, according to Moscovice, that homosexual behavior could be a vehicle that these species have developed during their evolution to achieve greater trust among unrelated individuals. "Our research helps explain why sexual behavior between same-sex subjects can be beneficial for bonobas, as it triggers the release of the hormone oxytocin, which causes feelings of confidence and closeness to increase in the brain, which promotes greater cooperation between couples. "

Moscovice, from Emory University (USA), and his colleagues analyzed a thousand sexual encounters observed over a year and a half in a community of forty bonobos in the Democratic Republic of Congo, in LuiKotale. The majority, 65%, were relationships between bonobas and only 1% sexual encounters between males. The sex between females consists of rubbing their genitals, the swollen vulvas (see video), which causes the pleasant outcome in them because it is the best posture to stimulate their clitoris mutually, embraced facing each other. Usually, but not always, intercourse between male and female occurs from their backs.

"If a male tries to harass or chase a female it is common for several females to join and drive away the male aggressor," explains the researcher.

The fundamental result of the study, that they publish in the scientific journal Hormones and behavior, is that the females remained close to their sexual partner in encounters with other females, much more than when they copulate with males. In addition, they secreted much more oxytocin, this hormone that helps strengthen ties between subjects. For example, male chimpanzees who are going to attack another community secrete oxytocin to establish links of warlike comradeship. And the final conclusion of the study is the most decisive: female couples who had more sex with each other also helped each other more in coalitions to defend each other and "reduce male harassment." Together defend their access to food, their place in the community and, essentially, against the sporadic attacks of males.

In chimpanzees, the evolutionary cousins ​​of bonobos, males aggregate females usually as a way to guarantee their sexual access, a way to strengthen their chances of reproducing successfully. Bonobas, on the other hand, do not have a definite period of zeal, which would make this violence useless in males. In addition, in previous studies it has been observed that Bonobas only form coalitions to go against males, never against other females, and in all cases the coalitions were victorious, forcing the bonobo to withdraw. Alone, on the other hand, they usually lose the battle because they are stronger. Chimpanzee females are sometimes attacked because they compete for the interest of males or for food.

"We discovered that most of the aid that was produced during the study period was between females and often against males," says Moscovice, who also investigates for the Leibniz Institute of Physiological Behavior. "This means that if a male tries to harass or chase a female, for example to take his place in a tree to feed himself, it is common for several females to join and drive away the male aggressor," the primatologist develops. On the contrary, it is rare for a male bonobo to get help from other bonobos if he starts attacking a female. "This may explain why male bonobos show relatively little aggressiveness towards females compared to chimpanzees, and why male bonobos are more likely than females to be expelled from access to important resources, such as preferred foods," he says. The primatologist. Therefore, although sexual interactions are not required for females to cooperate with each other, those who have more sexual interactions with each other are even more likely to help each other.

"Maybe females use sex as a quick and easy way to tell another female that they have friendly intentions and would like to associate with them," Moscovice describes.

The researchers found that most females have preferred mates with whom they are most associated in many friendly behaviors, but instead of just cooperating with these females, the bonobas allied with many different females and had sex with many different females. "Maybe females use sex as a quick and easy way to tell another female that they have friendly intentions and would like to associate with them," Moscovice describes. And he adds: "In this way, even those who are not close friends can stay together and cooperate sometimes."

In the study they point out that even the way to perform these sexual encounters between females could influence their ability to strengthen these bonds. To rub the genitals, the females hug each other facing each other, they look at each other, they have to coordinate their bodies so that the friction is satisfactory and, in addition, this friction causes them to stimulate their clitoris, which does not usually occur in the intercourse. with males "I would say that it requires more intense social contact than typical of intercourse. Genital rubbing occurs in a position that can easily facilitate clitoral stimulation," says the author of the study. And he adds: "In other species, we know that mutual gaze and genital stimulation are associated with increases in oxytocin, so it is likely that these aspects of genital rubbing also contribute to a greater release of oxytocin in bonobas."