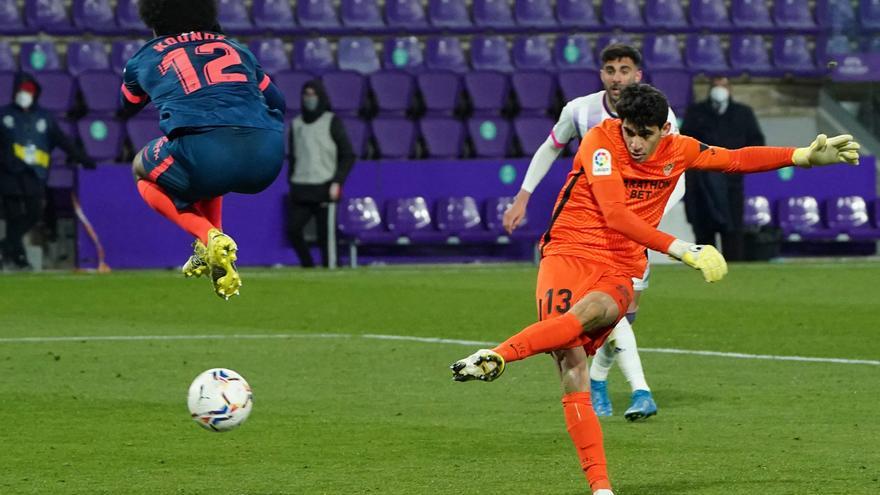 The Moroccan goalkeeper of the Seville Bono, who went up to finish off the last corner of the match, gave his team a point before him Valladolid (1-1), which was a important setback for the white and violet box, who again let a victory slip away in the closing bars.

The Andalusian team came out to press and control the ball. He made clear from the beginning his ambition and his hunger to continue growing. And already in minute 5 Papu Gómez tried to surprise Roberto with a strong shot that the local goal cleared, forcing the defense to prolong the action to prevent a new shot.

Valladolid showed temperance, seeking speed after recoveries and covering the spaces that Sevilla created with the arrival of the bands. Each time the control of the Nervionenses was becoming more intense, but they could not finish and create real danger in the white and violet area.

Those of Sergio González barely had the ball and, when it was in their possession, Sevilla pressed, so any creative and combinative capacity of the locals was annulled. They were not capable of breaking the scheme proposed by Julen Lopetegui, although they did not stop trying.

In fact, the Valladolid people did not lose faith in their game, they increased the intensity, the pressure and that allowed them to enjoy several minutes of control, although they found no reward, since the Andalusian defense remained attentive to the local incursions and did not concede options.

The impudence of Real Valladolid led to a play that, after being reviewed by the VAR, ended in a penalty after the demolition of Weissman by Diego Carlos, inside the Sevilla area, when trying to prevent the Israeli striker from finishing with his head. Orellana was in charge, once again, of transforming the maximum penalty and raising the first goal to the scoreboard.

With that advantage, Real Valladolid acquired more confidence and kept the intensity and pressure looking for another goal. As for Sevilla, Julen Lopetegui gave entry to Ocampos and Acuña as revulsive, but his team could not feel comfortable on the pitch.

That led to two other changes in the Sevilla ranks, De Jong and Rakitic for Rekik and Gudelj, to promote more creativity and finishing in attack. Precisely, Rakitic was the first to seek the equalizer with a shot that stopped, without difficulty, the local goal.

Real Valladolid was a compact block and kept defensive concentration. Sergio, to favor that union between the lines, brought freshness in the center of the field with Míchel and Fede San Emeterio, aware that Sevilla was going to push harder, as it happened.

The Andalusians were safer and more reached the white and violet area, with Ocampos as a reference. On the right wing, he began to create danger and, in one of his centers, he found De Jong, whose launch repelled a stick, preventing the visitor's goal.

The game was still open. The fear of losing what was achieved was logical among local players, who had to retreat before the push of Sevilla and surrender to the maximum in the defensive plane. Lateral centers could be a problem and this had already hurt Valladolid too many times.

But It was Bono, the Sevillian goalkeeper, who once again left the white-and-violet box frozen with a powerful shot after a chaotic corner in which Valladolid did not act forcefully, leaving the ball dead, and the visiting goalkeeper tied the match.

Incidents: Match corresponding to the twentieth round of LaLiga Santander played at the José Zorrilla stadium.