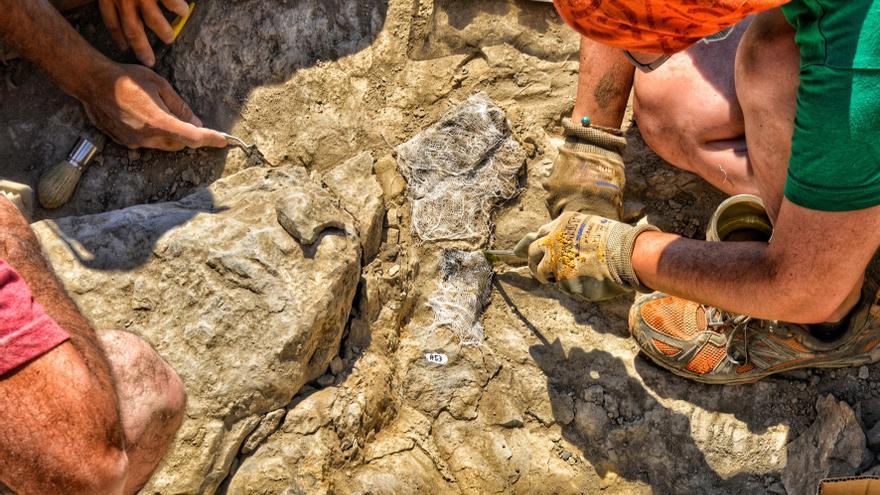 The latest findings in the place of ‘Peña Cárcena’, in Igea, (The Rioja), constitute “a success “for the field of paleontology world, since numerous fossilized bone elements have been recovered, possibly assignable to three dinosaurs different, -two herbivores and a carnivore-, in addition to associated fauna, such as fossilized bony fish.

The paleontologist has detailed it to Efe Xabier Pereda Suberbiola, researcher at the University of the Basque Country, and Francisco Sáez-Benito, honorary director of the Paleontological Center of Igea, at the foot of the site, once the excavations are completed.

The research team is made up of paleontologists from the universities of La Rioja and the Basque Country, in Spain; and those of Río Negro, in Argentina; and Qeesland, in Australia; as well as geologists, biologists and restorers specializing in paleontological remains, along with paleontology fans.

In one of the sites, the excavation of which began in 2019 but which was paralyzed in 2020 due to the pandemic, new skeletal remains of a large dinosaur: vertebrae, ribs and appendicular remains, such as femur, tibia, or femur, fibula; that could correspond to a sauropod -a long-necked dinosaur (herbivore) -, which can be confirmed in the study that the team’s scientists will do, once the material has been prepared.

In this same area, but in a site excavated this summer for the first time, they have recovered 60 fossil remains, which could belong to an ornithopod dinosaur -a bipedal herbivore- of medium to large size, between 6 and 7 meters in length.

Among these 60 remains, the researchers have specified, two teeth similar in shape and size to an Iguanodon.

Other identified remains are bones of the axial skeleton, such as vertebrae and ribs, as well as elements of the pelvic girdle.

In addition, in this same site, another 50 fossil elements of a large theropod dinosaur -a carnivore-, possibly assignable to a spinosaurus.

Among these 50 fossils there are mainly ribs and vertebral remains from different areas of the axial skeleton.

If the first impressions on the dimensions of this theropod are confirmed, they have specified, its size would exceed 9 meters in length, with what would make it the largest carnivorous dinosaur located to date in La Rioja and one of the largest in Spain, but it is an extreme that has to be confirmed.

These new findings are added to the fossilized skeletal remains recently located in this same mountain, corresponding to a small ornithopod dinosaur -vegetarian-, found in this area in 1985, and that they could determine a new genus of this animal, although it cannot be determined until the investigation is finished.

The excavations carried out this year in this mountain -about 80 kilometers from Logroño-, have indicated, highlight the great scientific and patrimonial value that it treasures for paleontology, whose fertility in fossils contributes knowledge to the functioning of this ecosystem of 120 million years ago of years.

The remains recovered this year have been deposited in the Paleontological Center of Igea for their subsequent restoration, cataloging and study.

Currently, two members of the team are also working at this Center in the restoration of ‘Claws’, the name with which the remains found of a medium-large carnivorous dinosaur, extracted in the excavations of 2018, have been coined.