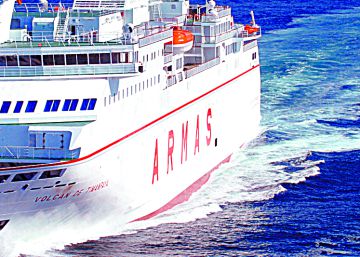 Naviera Armas seeks to agree with its bondholders a new capital structure that guarantees the viability of the company. For this, the owners of their 582 million in bonds ask for a change of helm. They demand a more professional advice and the appointment of a CRO (chief restructuring officer) pilot the plan to bring order to the company.

The company and its creditors signed a pact last week. They laid the first stone to straighten the complicated waters through which the owner of Trasmediterránea navigates due to the crisis derived from Covid-19. They reached a non-aggression agreement (standstill, in jargon) and they agreed to refinance the firm’s debt before the end of the year.

For this, the bondholders ask for a turn of the steering wheel in the management of the company. And have your team reformed. They do not intend to displace the Armas family, which founded the company in the 1940s. Currently, it maintains the leadership of the company through its current president, Antonio Armas Fernández, son of the founder of the leading shipping company in the Canary Islands.

The bondholders ask for the management to be professionalized. They plan to harness the knowledge of the family for the new era of the company. But they also defend the need to include independent directors in the management. And they even contemplate the possibility of imposing a CRO. This is an executive from outside the company that the creditors embed in the management with the function of ensuring that the restructuring plan is carried out point by point.

In return, bondholders are willing to commit to the viability of the company. They weigh support with an injection of capital, in exchange for a higher interest. And there is even a possible entry into the capital with a conversion of debt into shares, although the current shareholders would maintain control.

The lionized measures to contain the coronavirus, which have caused the confinement of half the world, have put in check the sectors most linked to transport and tourism. And one of those companies in the pillory is Naviera Armas, the owner of the Trasmediterránea cruise company and the operator of the routes between the Canary Islands.

In the case of this company, the pandemic has only led to financial problems that it was already dragging, derived from the high debt it incurred to acquire Trasmediterránea without its synergies having yet emerged. According to the 2018 accounts, the last ones deposited in the Mercantile Registry, the company had a debt of 720 million and lost 5.6 million euros.

Of those 720 million of debt, 582 million correspond to two bond issues. The first is 300 million, expires in 2024 and traded yesterday at 45% of nominal. The other has an amount of 282 million and expires a year before. Both placements came to trade at 35% of nominal during the month of April.

Since the Covid-19 crisis broke out, Naviera Armas has been forced to increase its indebtedness, which has already reached 1,000 million. It has obtained a bank loan of 40 million guaranteed by the ICO and 75 million more from two debt funds, Apollo and HPS.

These injections of liquidity have not been enough to avoid a crisis. In November, the payment of the coupon for their bonds was suspended. The interest ranged between 4.25% and 6.5%, which triggered its financial expenses to unsustainable levels. In 2018, it paid for this concept 42 million, an amount that devoured its operating result, that year of 3.8 million. The shipping company opened negotiations with its bondholders two months ago to restructure its liability and capital structure. For this, they hired the investment bank specialized in this type of situation Houlihan Lockey, while PJT Partners works for bondholders.

Liquidity and capital. The main shipping group in Spain that connects the Balearic Islands with the peninsula and the Canary Islands with each other has requested help from the SEPI rescue fund for an amount of up to 120 million euros. The sources consulted indicate that if the money does not arrive quickly enough, the bondholders propose the possibility of granting the company a bridge loan so that it can face its most pressing needs in order to continue operating. The big problem, however, dates back to 2018, when the company controlled by the Armas Fernández family paid Acciona more than 260 million euros by 92.7% of the iconic Trasmediterránea maritime transport company. For this, it made its last bond issue. These have been a corset that has skipped the seams with the arrival of the pandemic.