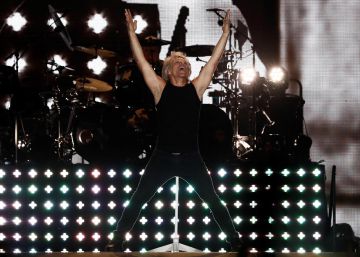 Is it possible to offer a rock concert with a diminished voice and succeed? Yes, it is possible, as it was demonstrated yesterday at the Metropolitan Stadium in Madrid. Probably the only one who can do it is who carried it out, Bon Jovi. And he can get it because Bon Jovi does not make songs: he composes disgustingly adherent refrains. And for these you do not need a solo voice. Thousands of throats are already singing for you.

One of the most repeated images last night at a concert that filled the red and white field (50,000 people) was the following: Jon Bon Jovi clutching the microphone with both hands, writhing, eyes closed, trying to search deep in his throat the high tones, suffering. Sometimes he got it, in the least demanding phases; others, when the song was steep, they were their group companions (up to six supporting the choirs) who pushed the piece with their lungs; and the most was the public enthusiast who packed the venue who was responsible for carrying the weight of the issues.

Go ahead that people enjoyed the beautiful. Because everyone went to the Simeone stadium to have a great time. What are, after all, scant vocal cords when you have paid 90 euros? Nah

The surprising thing is that everything was strangely authentic. Because if Jovi does not have a voice he could have taken recorded sounds. Yes, opt for the coward playback In some moments, that's how more pop stars work than desired. And surely we would not have noticed. Or you would have left us alone with suspicion. But no, he decided to suffer and show his weaknesses, in a show of guts that proposes to the spectator a dilemma: on the one hand he greatly misunderstands the interpretations, but on the other you feel a deep respect for that guy who, indeed, is giving everything. .. even if it is scarce. The example of this was the interpretation of the ballad Bed of roses. Jovi did not sing, she howled and passed them by, but managed to finish her with a smile and a rose in her hand. That's a professional, yes sir.

Before starting the show the singer gave a master that could be titled: how to get money from under the stones. On all three huge screens, all kinds of products were offered, the proceeds of which went, of course, to Jovi's current account. What if a special pass for the next concert, that if a cruise at the end of August with the star telling jokes and singing for the cabins, what if shirts at 35 euros … The flagship product was a tomato sauce of the brand Bongiovi whose owner is Jon's father. Everything could be acquired with a couple of clicks of the mobile. The concert had not started and several dozen euros had already flown out of our wallets.

Plucked and happy, we attended a start that made the stadium as hot as when Diego Costa scored in this field. This house is not for sale (the best of his new album), Raise your hands, You give love to bad name Y Born to be my baby. Rain of choreable refrains.

The songs of the group caused so much happiness that even the fickle people who missed Richie Sambora at the beginning of the concert (the other leader of the group, now alone) to the second song did not even remember the guitarist. His replacement, Phil X, the truth, meets and grows much less than Sambora (yes, Jon).

Physically the boss is in shape at 57 years old. He showed up with skinny pants and a sleeveless shirt, all dark. Then, however, he did not waste as much physical exercise as, say, Mick Jagger. The singer transits the stage with restraint, runs little boats like a gym teacher in the warm up of a class and raises his arms to show us his muscles and he is shaved. Some observer commented that the voluminous Kutxi Romero, singer of Marea (who were excellent opening acts: good time the band from Navarra), had run more than the New Jersey.

With Bon Jovi it ​​is convenient to release the hand brake and let yourself fall, without fear, through the slide that connects directly with our most tacky personality. Yes, we all have it. And you have to take her out for a walk from time to time. It's healthy. In addition, our frivolous version is more permissive, so we do not care that the guy who crowns the stage from time to time emit a trickle of voice.

It was not the whole concert a karaoke, that is clear. Jovi's problem is when he tackles his high-pitched songs, which are many. What is certain is that last night does not seem like a punctual event. Maybe it's been broken for several years. He himself confessed in a 2016 interview, that each concert night "he dreamed of going back in time and asking his 18 year old me to appear to sing the highest notes of Livin' on a prayer" And already, by the way, that Bon Jovi exultantly young Keep the faith, Bad medicine or Item's my life, that they played last night more in the throats of the spectators than in that of the protagonist.

At the height of Wanted dead or alive the voice of the guitarist was cooler than that of the star. Phil X saved the piece. And there was still half an hour of torment for Jovi. Since we are going to suffer, let's do it in a big way: almost two and a half hours of concert. In each minute the band of six musicians, always discreet and without asking for prominence (not even the beloved drummer Tico Torres) proved to be at a great height, so many times that he exceeded his leader several times.

With Livin 'on a prayer the end has arrived. Jon Bon Jovi was relieved and the audience happy and sweaty. Outside the stadium huge letters in the form of sculpture taken from the Atleti anthem perfectly served to define what we had seen: courage and heart.