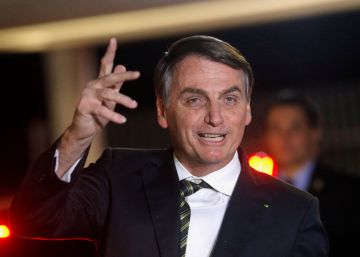 Investors with interest in Brazil can be calm, economic policy is not in the hands of the president. How Jair Bolsonaro himself He explained this Thursday to the 1,500 businessmen gathered in São Paulo, he is just a soccer coach he trusts. And economic policy, reiterated the controversial president, is a matter of economic superzar, Paulo Guedes. “The economy is yours, I didn't tell anyone. I don't interfere, ”he told an audience that he responded with a closed applause. Bolsonaro and Guedes have failed to reach the investor forum with the pension reform definitively proven, but the minister has reiterated: "Democracy and markets are our guide."

He ultraliberal Guedes He entered the Cabinet of the extreme rightist Bolsonaro with the mission of turning the Brazilian economy around. In his speech he presented the president's arrival in power as a full-fledged revolution to correct economic policy. A country with a closed economy, a huge bureaucratic apparatus and endless standards. "The previous governments put the economy above the country," said the minister, who became rich in the world of finance and had almost no political experience. Since his appointment he is implementing an agenda to clean up accounts, deregulate, shrink the structure of the State, make concessions and privatizations.

Coinciding with the forum, Brazil has begun bidding for oil exploitation concessions. "We are removing oil work, which has been at sea for five years (without being exploited)," he said. The president of the Inter-American Development Bank (IDB), Luis Alberto Moreno, has assured that Brazil begins to regain foreign confidence. "At a time that many countries are looking inward and questioning foreign trade, Brazil is launching an ambitious agenda of economic openness and international insertion," he said in a speech in which he also recalled one of the symbolic data of the stunted Brazilian economy. A company requires 2,000 hours per year to pay taxes, a world record.

The pension reform, the star of the legislative agenda of this Government and a step essential to stop the bleeding of public accounts, It is about to conclude its procedural parliamentary process but for a few days it has not arrived on time. Approved in July in the Chamber of Deputies with ease, the plan is for the Senate to hold the final vote from day 22 to implement a profound change in the retirement system that will save around 900,000 million reais in one decade (about 200,000 million euros).

The key is to see what the savings are when the law is definitely passed. That is the signal that investors expect. Although the process has suffered several delays, which the Government had contemplated, the reason for the latter is at least striking: the canonization this Sunday in Rome of Irmã Dulce (sister Dulce, the first Brazilian saint. “I am a Catholic, but this is a joke There are three planes full of politicians that are at the expense of the taxpayer, delaying the vote on pensions by 10 days, "said Senator Major Olimpio, the chief of the Bolsonaro party bench. The next major economic reform, the tributary, already is underway

The president has mentioned the oil spill that has led chapapote to over a hundred beaches in the northeast and has talked about the environment in general, an important issue for investors but that is also the one that generates more foreign criticism. After ensuring that it intends to exploit the Amazon “in a sustainable way”, it has reiterated its intention to regulate informal mining. "We want to legalize the garimpo for whites, as the Indians say, and for the Indians," said the president who believes that environmental regulations, which have been key to the preservation of the tropical forest, are a corset too tight. His arrival in power has meant a huge weakening of ecological control. Precisely the oil bidding held on Thursday means, according to environmentalists, it represents a risk for an area with the highest marine biodiversity in the South Atlantic.

But the enormous expectations with which the markets received Guedes and Bolsonaro – with record rises in the Stock Exchange – has not translated into the economic growth initially expected, partly because of the international situation, and partly because the Government has engaged in infinity of controversies and has not maintained a relationship with the Congress as fluid as the Brazilian political modes demand. "Growth is now sustainable, healthy, not an artificial bubble," said Guedes.