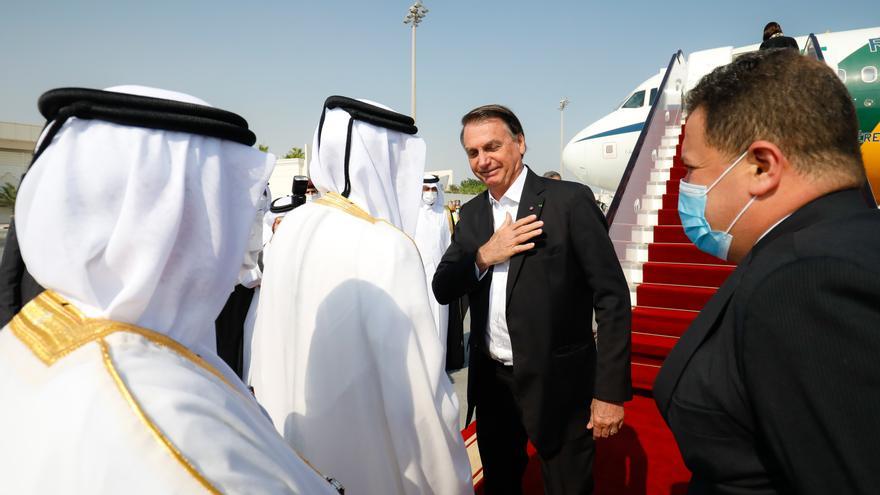 The President of Brazil, Jair bolsonaro, insisted this Friday that the news about the possible disappearance of the Amazon by increasing deforestation and the multiple fires are false and propagated by Brazilians who want to affect the image of the country and scare away investments.

“If deforestation had the proportions they are saying, the Amazon would already be a desert”said the far-right leader in a live broadcast he did on social networks when he returned to Brazil after his trip to the United Arab Emirates, Bahrain and Qatar.

The head of state downplayed the alarming data on the destruction of the largest rainforest the world a day after the government itself reported that the Brazilian Amazon lost 13,235 square kilometers of vegetation cover between August 2020 and July 2021, the largest degraded area for a twelve-month period in the last 15 years.

Logging in the Brazilian part of the Amazon in the last year it was in a 21.97% higher than 2020 (between August 2019 and July 2020), when covered 10,851 square kilometers, and it was not as high since that registered in 2006 (14,286 square kilometers), according to data released on Thursday by the state National Institute for Space Studies (INPE).

According to this body, which measures logging with the help of satellite images, deforestation in the Amazon grew up for the third year in a row since the far-right leader took office in January 2019, and for the first time it registered four consecutive years of elevation since it began to be measured in 1988.

Bolsonaro affirmed that this type of news only they serve the opposition in Brazil to affect the image of the country abroad and they hamper the government’s efforts to attract investment, such as those it made on its trip to the Arab countries and which it considered successful.

“But they invest if they feel confident and, while we work to attract investment, lousy Brazilians go out to criticize Brazil and to tell lies about the Amazon and to say that we are setting the Amazon on fire, “he said.

“This is the same old nonsense. It is news sponsored by Brazilians who work against the country, drive away investments and generate many economic difficulties, “he said.

“So far I haven’t seen a Californian saying California is on fire or a Chinese criticizing his country for requiring quarantines against pollution. I never saw anyone speaking badly of their country like the Brazilians do “, said.

He added that the only discussion he had on his trip abroad was on a stopover in Lisbon in which a Frenchman criticized him for setting the Amazon on fire, and that he preferred not to ask him about what happened to the forests of France and the non-polluting energy sources in that country.

“That idiot wanted to argue with me because he reads lying news from Brazil speaking ill of the Amazon,” he said.

Added that became a source of ridicule when he recently said that the Amazon does not catch fire and that the majority are unaware that the fires in the region occur in its peripheries and not in the interior of the jungle.

“The sources of fire are always in the same place and are generally caused by indigenous people, settlers, fishermen and caboclos who have subsistence crops and set it on fire to prepare the land for new crops, “he said, minimizing the fires caused by large landowners.

The INPE data, however, also deny the statements of the head of state. According to the state agency, only last June were registered 2,305 sources of fire in the Amazon, the highest number for the month since 2007.

According to INPE, the most critical year for the Amazon was 2020 when a record 222,000 fires were recorded in the region.

“There is illegal deforestation, yes there is, but that would be resolved if the other countries did not buy the illegally extracted wood from Brazil,” Bolsonaro said.

“There are illegal fires, yes there are, but not in the proportion that they are saying. We fight fires and they ask us for more effortsBut they do not know the size of the Amazon, which has an area equivalent to that of all of Western Europe, “he added.