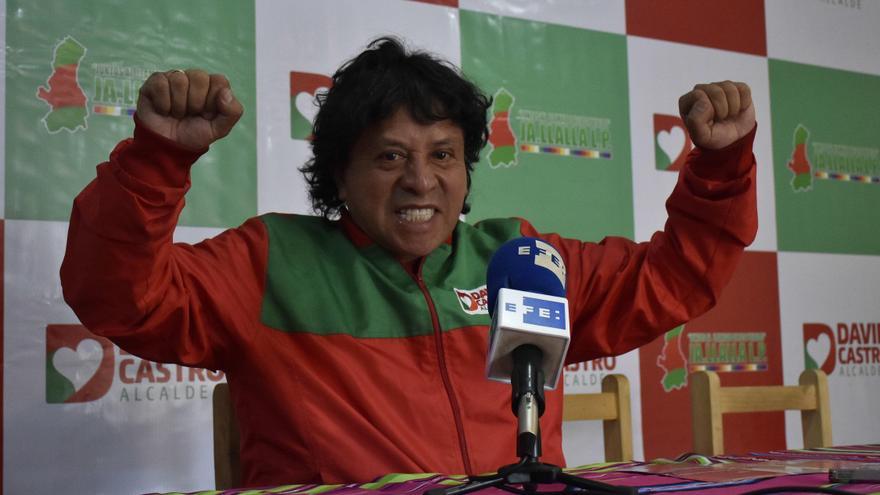 La Paz, Feb 23 (EFE) .- The multi-faceted singer David Castro once again took the microphone with which he won the hearts of many Bolivians in the nineties to sing the tropical songs that led him to be considered one of the greatest exponents of that genre in the country, but this time to win the votes of La Paz because he wants to “govern with rhythm” and be the new mayor.

The Bolivian singer aspires to be elected on March 7 as the new mayor of La Paz, the seat of Government and Parliament, with the Jallalla party and thus not only transcend with his tropical and cumbia villera “hits” that marked a whole generation in the country, but also leave works for the city.

The campaign of what is considered a “legend” of tropical cumbia in the country is full of rhythm, Castro goes through different parts of La Paz with a microphone in hand to sing and dance with the people and at the same time leave them with brochures with his electoral proposals to “grow” this city.

The mayoral candidate considered that being a singer is an “advantage” over the other candidates, since the “townspeople identify” with him through his songs.

This is how he changed the lyrics to one of the best known songs called “Longing” to make his campaign and reach more people.

“I just want to smile again, I just want to go back to work again, I will vote for Jallalla, David mayor, you can count on me, we no longer want the same old people, Jallalla long live La Paz,” says a part of his electoral song.

Castro, who considers himself a dreamer and at the same time a winner, emphasized that his life has been full of ups and downs, of moments of great success and at the same time of poverty, so he knows the different realities in the city, which would help improve and renew La Paz.

“I think it is time to share all the good things that happen to me with my people, in that way I was encouraged to enter the political field, to do things for the good of society,” Castro said.

MULTIFACETICAL: FROM MUSIC TO FILM

The singer, who has a career of at least 27 years and more than a dozen records to his credit, began his career in music by wearing mariachi hats to presentations, then played the guitar, the Argentine singer Leo Dan arrived in the country and his songs inspired him to form his own mariachi.

Later he was part of several cumbia groups in the country such as Los Brothers and his fame was consolidated in the nineties, between “falls and resurgences” he was part of groups of cumbias villeras and the songs until now continue to make people from La Paz dance.

In 2015, the 59-year-old singer gave his farewell concert due to a problem with some nodules in his throat, for which they even told him that he could no longer sing, traveled to Spain for his treatment and resumed his musical career.

Castro also has his own sound service company, is part of mining cooperatives, and in 2019 he began filming a film called “Añoranzas” as his biggest hit, which was filmed in Spain, Argentina and the United States, tells of the problems of migration and within the cast has the Mexican actress Carmen Salinas.

He also promotes the career of a couple of his 10 children who want to follow in his footsteps and dedicate themselves to singing and music.

Castro proposes for La Paz to build more hospitals to see the need that people have due to the covid-19 pandemic and to give children who go to primary and initial school a “digital backpack” that has a tablet.

In addition to promoting “serenazgo” to employ young people in different neighborhoods to stand guard at night and avoid insecurity.

He also wants to promote safety in schools, he intends to create a pothole unit to fix city streets, build a new terminal and give a food voucher for students.

According to the latest polls released this weekend, Castro ranks fourth in voting intention among twelve candidates.