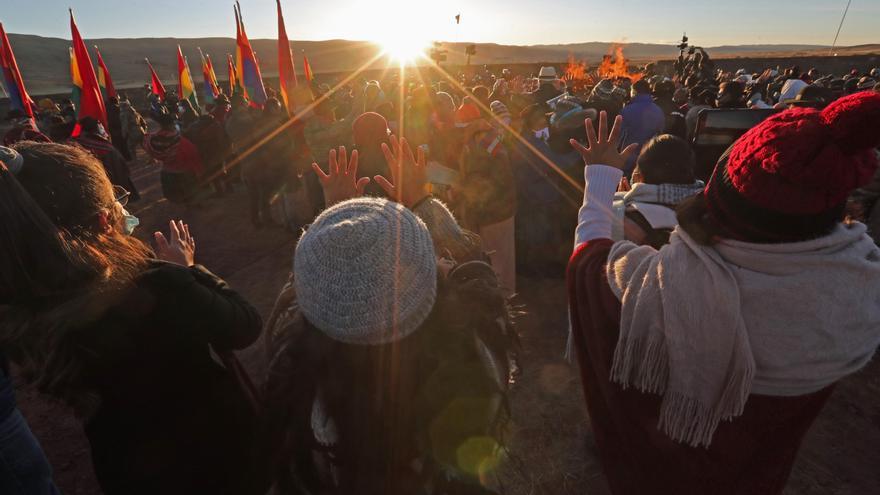 La Paz, Jun 21 (EFE) .- Bolivians received this Monday the first rays of the sun with their palms raised to celebrate the Andean New Year number 5529, amid ancestral rituals carried out in various sites considered sacred to the indigenous and some restrictions due to the covid-19 pandemic.

The festival of the return of the sun, "Willka Kuti" in Aymara or "Inti Raymi" in Quechua, was celebrated in places such as the Killi Killi Viewpoint, a hill that offers a complete view of the city of La Paz to where they arrived at dawn. dozens of people to wait for the sunrise.

Without forgetting to put on the mask, the people waited for the "Tata Inti" or Father Sun with native music and dances, as well as rituals of gratitude to the "Pachamama" or Mother Earth.

In Killi Killi there were two offerings, one presented by the La Paz Mayor's Office and the other prepared by the "amauta" or indigenous spiritual wise Elena Martínez.

"We are here celebrating and receiving the first rays of the sun to celebrate this Andean Amazonian and Chaco New Year number 5529 (...) We have not made a very big event because we are living difficult times in terms of health," he told the means the Municipal Secretary of Cultures, Rodney Miranda.

The official stressed that "the important thing is to recharge energy, recharge the 'ajayu' (soul)" to work for the municipality and take the opportunity to reflect, since the Andean New Year means the "closing of an agricultural cycle and the beginning of a new one. "that must be faced with" clean emotions ".

"Today we ask God, Pachamama, Tata Inti and all the supreme beings to protect us and give us health," added Miranda.

On the other side of the hill, the "amauta" Elena, of Quechua origin, prepared an offering with traditional sweets of different shapes, medicinal plants, incense, aromatic vegetable resins and colored wool that she placed on a pyre minutes before departure. of the sun.

"We are here for the Inti Raymi, the Willka Kuti, receiving the new energies, a new mandate that the Tata Inti would have to give us to see what we are going to do from today in the new cycle that we are entering", in addition to thanking for the goods received, Martínez told Efe.

For the "amauta", Father Sun's message on this occasion is "continue with more strength, with more confidence, with more health" after a year in which everything was paralyzed by the pandemic and people were weakened.

"Now let's face what we have looked for ourselves, as humans we have made us cover our mouths and now Tata Inti will be telling us heal, but heal with great wisdom," he added.

A delegation from the Bolivian government led by the country's president, Luis Arce, and vice president David Choquehuanca arrived at the pre-Hispanic citadel of Tiahuanaco, the traditional center of the Andean New Year celebrations located almost 80 kilometers from La Paz.

The president said that "as never before" these forces are required and that is why the authorities went to Tiahuanaco "with great faith" to ask the deities for "health" and for the Bolivian economy to "advance."

The celebration, which also means the change of the agricultural cycle for sowing in the field, coincides with the southern winter solstice, when the shortest day and longest night take place in the Southern Hemisphere.

The name of the festival has evolved with inclusion criteria, since it began to be celebrated a few decades ago in Tiahuanaco as Aimara New Year, then it was called Aimara-Quechua New Year and later Andean New Year.

In 2009, the Government of Evo Morales baptized the celebration as the Andean Amazonian New Year and decreed that every June 21 is a national holiday, and in 2017 the name included the Chaco area.