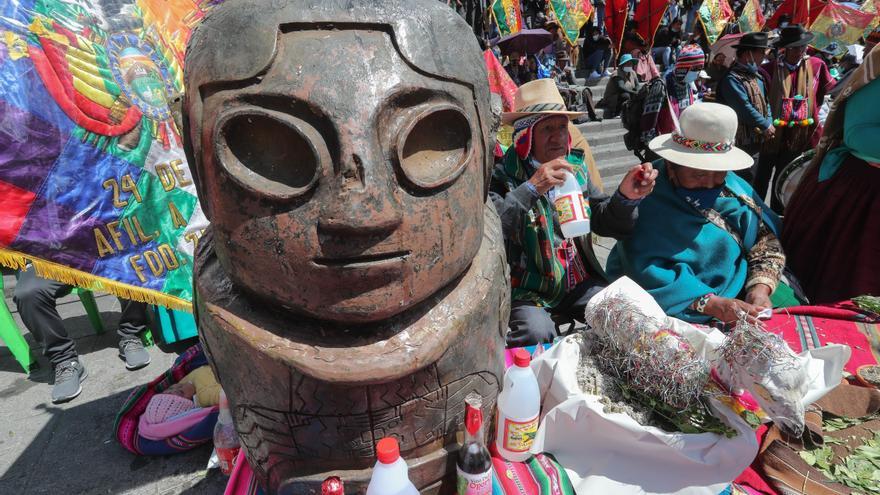 La Paz, Dec 21 (EFE) .- A group of amautas or spiritual guides performed ancestral rituals with offerings for the Pachamama or Mother Earth and incense to welcome “the energy of abundance” for the southern summer solstice in Bolivia .

Dozens of spiritual guides set up in the Plaza San Francisco in La Paz several tables with flowers, food and incense to ask that there be no lack of food in the ancestral “Illapacha” ceremony, with which the solstice is welcomed.

In the middle of the prepared offerings there was a kind of colored pyramid that on top had an Illa, an Andean stone deity that brings prosperity, and around the believers they left colored wool and some offerings.

There was no lack of native music with instruments such as the panpipes or drums and the dances with traditional costumes that accompanied this ancestral ceremony that is also known as the festival of seeds.

The central act was attended by the Vice President of Bolivia with Aymara roots, David Choquehuanca, the Minister of the Presidency, Maria Nela Prada, his colleague of Cultures, Sabina Orellana, and the Secretary of Cultures of the Mayor’s Office of La Paz, Andrés Zaratti.

A DATE THAT PROVIDES ENERGY

“Today is a special day where we are going to share the energy of abundance, of life, all human beings who live in the southern hemisphere celebrate the summer solstice, half the time,” said the vice president.

Choquehuanca highlighted in a brief speech that this day is a “cosmic date” that “awakens the senses that are sleeping” and that the Andean deities cry “loudly” for the people to wake up to return to the road.

The vice president added that it is necessary to charge with the energy of this day to “guarantee the individual and collective well-being” and that among all the joys and sorrows can be shared and thus “awaken the communal energy.”

The Bolivian vice president along with the other authorities participated in the ancestral rituals at the different tables and offerings that were prepared in the plaza in the center of La Paz.

The amautas set fire to one of the offerings prepared for Mother Earth filled with colorful sweets next to a llama fetus and then raised their hands and sounded the “pututus”, instruments made of bull horns.

This time is believed to be feminine in which abundance, prosperity is requested from the ancestors and deities such as the sun, the moon and the Illas, Wilfredo Murga told EFE part of the National Council of Amautas.

Meanwhile, former President Evo Morales together with the president of the Chamber of Deputies, Freddy Mamani, participated in an act in the pre-Hispanic citadel of Tiahuanaco to “nourish themselves with positive energy.”

On this occasion, the ancestors were asked to “bring” rain to the field so that the drought does not affect the crops, since the sowing time also begins.

This ancestral ceremony was rescued from the traditions that survive in rural areas in the Bolivian highlands on the occasion of December 21, the day that the solstice is celebrated when the sun is at its best.

In addition, this festival remembers the first planting that took place in September and the first “fruits” are given as a token of gratitude to the deities.