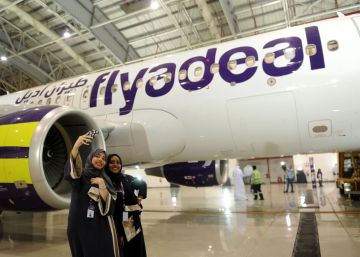 Saudi airline Flyadeal has announced the cancellation of the pre-agreement signed in December for the purchase of 50 Boeing 737 MAX aircraft, and its replacement by the Airbus A320 NEO model, in what is the first serious setback for the US manufacturer after the two accidents recently registered by 737 MAX devices in Ethiopia and Indonesia,the company reported in a statement.

The low-cost Arab airline Flyadeal announced the cancellation of the order, valued at about 5.9 billion dollars (5.270 million), and the purchase of 30 Airbus A320 NEO with the option of acquiring another 20 aircraft and deliver them all in 2021, so the The airline will operate a fleet integrated solely by this model, with which it already had before, according to a statement.

Boeing said in a statement that "it continues to focus on restoring the 737 MAX safely and resuming deliveries of the MAX aircraft.", paralyzed in almost everyone waiting for the authorities to certify an improvement of their control system, informs Efe.

"Boeing is proud of its partnership with Saudi Arabia's aviation industry for seven decades and we wish the Flyadeal team the best in expanding its operations," the company added in the short note.

The subsidiary of the Saudi state airline said the purchase agreement was recently signed at the Le Bourget Air Show, north of Paris, where it became clear how Airbus is gaining the commercial pulse of a Boeing weakened by the serious crisis that its star plane.

The failed purchase agreement between Boeing and Flyadeal represents the first setback for a customer of aeronautics, which suffers the consequences of accidents in the Java Sea in October 2018 and in Ethiopia in March this year, which caused 346 deaths.

The investigation has not ended but Boeing has acknowledged that the two incidents were caused by a technical failure in the flight control software, the so-called MCAS, for which it has produced a package of improvements that must be approved by the Federal Aviation Administration (FAA). ).

In May, Boeing said it had completed that software update and corresponding tests, but at the end of June the FAA found another "potential risk," which the company is now working on resolving so that these planes can fly again.

Boeing has paralyzed deliveries of the device to its customers but continues to produce at a slower pace, 42 units a month, with the idea of ​​accelerating to 57 monthly once the fleet is operational again worldwide.