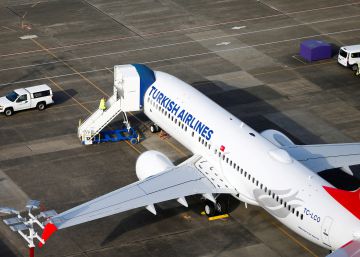 Boeing’s problems with the 737 MAX model increase. On the one hand, as reported The New York Times, the company has found new security risks for these planes that remain immobilized after two fatal accidents which caused 376 deaths.

These tragedies in Ethiopia and Indonesia were produced by a software that it worked badly and that caused the plane to plummet if the pilot did not react in time. Boeing had already found out where the problem is and says it has been corrected. But in addition, at the request of the US authorities, it is carrying out an exhaustive investigation to find any additional fault according to new standards that contemplate a slower and less effective reaction of the crew. And in that process he has found that there are two bundles of wires located in the tail that are very close.

Now the company is examining whether this wiring runs a risk of generating a short circuit that would complicate the piloting of the device. Company sources have acknowledged that if the electrical failure occurred it could even cause the plane to crash if the pilot could not recognize the problem and respond appropriately. The manufacturer must also examine whether the same vulnerability of the cables also exists in the 737 NG models, the predecessor of the MAX, of which there are 6,800 units in service.

However, the company has stated that, if any arrangement is necessary, these wiring modifications are relatively easy to make in a couple of hours by plane.

MAX engines have also undergone great scrutiny. The engine manufacturers, the companies General Electric and Safran, have already informed the authorities that there was a weakness in one of the rotors that could cause it to break. However, regulators have considered this to be a very remote possibility. Of course, they have asked the airlines to inspect all the engines before putting them back into operation.

Boeing had also previously detected a plane problem that made it vulnerable to lightning strikes. To try to make the engine fit better in the airplane, the factory removed without realizing a layer that protected it from unloading.

The US Federal Aviation Administration has stated that it will ensure that all identified security risks are resolved before the return to service is approved.

As he explains The New York Times, European regulators will go to Seattle this week to test the new software in a simulator, which shows that the arrangement is now ready to be evaluated. US airlines expect to be able to use the MAX again between April and June.

On the other hand, as published on Monday The Wall Street Journal, the company is considering raising its debt, delaying investments, freezing purchases and cutting research expenses. Everything to be financed after the immobilization of 737 MAX.

The MAX is the main airplane of Boeing. There are 5,000 orders placed from airlines. And the manufacturer has announced that it will temporarily close the facilities that produce it. Last month, the board dismissed the CEO, Dennis Muilenburg, for being unable to tackle a crisis that has already cost the company $ 9 billion. He has been replaced by former financial director Greg Smith. Next week, he who was non-executive president, David Calhoun, will take up the post.