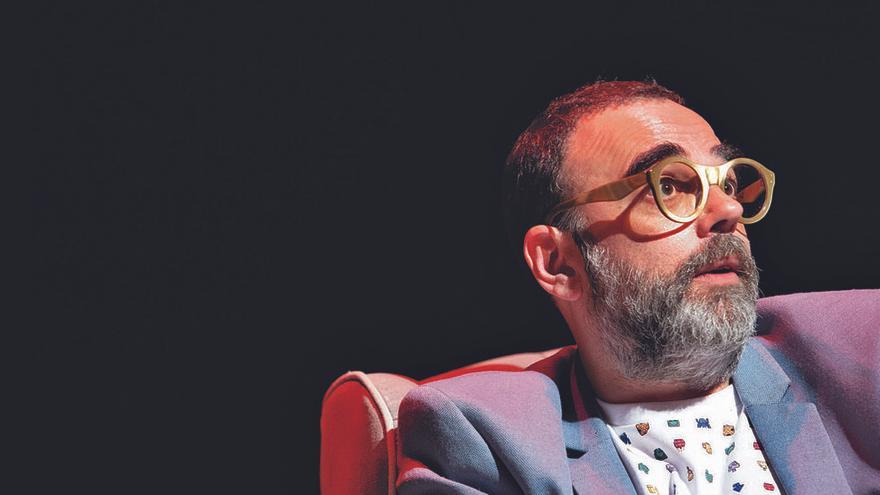 In the series he recovers the argument of “Mansos” but the ending has changed. Why?

Because we have to show that we are less tame and that, as his grandfather says to the character of Roberto in the series, we do not have to assume that because we are different we have to end badly. ‘Mansos’ I wrote it 12 years ago as a reckoning with me and its ending has to do with the need to rest, stop and breathe. When I adapt the novel to the series I think how beautiful it is that life gives me the option of changing the ending to tell that the path that I have traveled has served a purpose. Among other things to show that we are no longer tame and that fascism can be hit on the head.

But one has just seen the series, sees the murder of Samuel Luiz on the news and realizes that reality is stubborn.

And horrible. I started the promotion with a certain luminosity, presenting «Lost Fagot» almost as a historical series that shows a past that we thought we had overcome, and reality has shown me that it was not. Yes, one very important thing has changed: the spaces of hatred continue to exist, but those of flight and shelter are becoming more and more. The difference is that what we see now on the news 20 years ago would not come out and this is probably a good sign.

He writes about how he went from meek to defying with his queer gaits.

Because just as they attack us and kill us without caring who we really are but who they think we are, we have to make it very clear that we are who we are and we have the right to be with our heads held high and that it is the only way to confront that horror.

See it as an example?

No, but as one more voice within a chorus of many voices that hopefully are more numerous each time. I see myself as someone who has his story to tell in his own way and who, as I have done, many and many and many can do it. I have always considered fiction as a way to pierce the wall of the cul-de-sac through which to escape.

Is it better to boast of LGTBI culture than to avoid labels?

Yes, because it is a culture that we have built based on values ​​such as the vindication of the struggle of our colleagues from the past, as a refuge from a hostile reality and as a way of assuming that we do not want to be normalized, that we have the right to contribute to society all the experience of struggle and identity that we have lived. And I do not vindicate that LGTBI culture as something endogamous but as something that can contribute to society to learn to handle the new times.

In return, the enemies increasingly scream.

When I have a good day, I think it has to do with a reactionary attitude that happens when hegemonic groups feel that their privilege is shaking. It happened before feminism and it happens now before the LGTBI collective. It is a reactionary and violent tantrum that, unfortunately, is taking people away. This shows us that the fight must be carried out and that it can be won.

For me it was important because, as adolescence has become a commercial target, it has become very sweeter. Suddenly it’s cool to be a teenager. But being a queer teenager or heterosexual or handsome or fat is always a horror because you lack so much information and so many questions come to you that it is a difficult moment of vital stupor. People who remember adolescence with joy and nostalgia make me very envious.

Have you succeeded in imposing the mind on the complexes of the body?

For me the body was a kind of enemy of what I considered my great jewel: my head. Sclerosis had to show me that the jewel was paralyzing that body of which I was ashamed. It was a way, too traumatic for my liking, of explaining that everything goes together. If something has saved me from my life it has been my head, my thoughts, but now that I speak from a damaged body I feel that I have not enjoyed it more.

I published ‘Mansos’ as Roberto Enríquez because I thought that Roberto was the serious man who wrote novels and Bob Pop was the firecracker who wrote about TV and social chronicles. Now I have unified the two people and we coexist super well. No matter how devoted one is to high culture, in the most important situations a poem by Gil de Biedma does not come to mind, a song by Madonna comes to you.

Did you miss having cultural tastes more appropriate to your age as a teenager?

There are moments that yes, but not to be so alone. But the culture protected me and gave me perspectives that I could not find in the town where I lived and with the people around me. It gave me a vanishing point to which I aspired, although that has the risk of disappointment when you create the expectation that there is a kind of promised land where everyone awaits you with open arms and you discover that no, not there either. The first time I went to a gay bar in Chueca, I expected to be greeted with colored balloons, a municipal band, and a banner that said “Welcome, fag,” and it turns out that neither. There, too, there is a search for identity and one’s own space.

Just as Bob Pop has reconciled with Roberto, will he reconcile with his family?

No. I have learned to keep them away. Over time you learn that there are things that you cannot change and the only thing for which age and a certain privilege is to be able to avoid them. In addition, the family also creates one. In the series I tell a lot of mistrust and misunderstanding but also that there are friendly hands that make up a family.