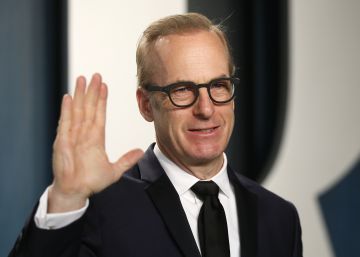 Bob Odenkirk must be the most enthusiastic person on the planet. “Is incredible. This time the scriptwriters have surpassed themselves ”, he declared in almost all the promotional interviews of the fourth season of Better Call Saul (the spin off of Breaking Bad) before its premiere in August 2018. “It’s amazing. I think this is the best season. All have been overcome. It’s amazing what you’re going to see. ” This is the first thing he tells us in telephone talk one before the premiere of the fifth season, available from February 23 on Movistar +.

The actor has been interpreting this lawyer in peculiar ways for more than a decade created by Vince Gillingan in Breaking Bad and whose story was so worth telling that since 2015 he stars in this successful prequel that tells his personal future. From being Jimmy McGill, the ambitious lawyer with touches of picaresque, to his conversion into Saul Goodman, the drug dealer of New Mexico. As in everything that has to do with Gilligan, the character’s development and the way the story has been taking shape has been cooked to a very slow fire. “It’s amazing,” Odenkirk insists, we don’t know if it’s already auto-parodic. “Really. Why has the public had such patience with us? Why have they waited? I could not tell you. It is very rare in these times, but the truth is that we are very fortunate that they have let us move history at this rate. But I bring good news: in this fifth season everything speeds up, all the pieces start to fit and, I don’t know, it’s amazing. ”

Better Call Saul already plays for several seasons in the league of spin off With their own personality, those who break the umbilical cord of the series from which they were born and fly alone where they feel like it. Vince Gilligan is a guy capable of not only endowing all his products with his own character, but attracting his actors to a universe in which they are extremely comfortable and happy. Although sometimes they don’t really know who they are playing. Gilligan asks the viewer for faith, and also his collaborators. He is a sadist. “During Breaking Bad I never got to understand what kind of person Saul Goodman was. He was not seen in any area other than labor … or criminal. I thought he was a lonely guy who liked to have fun in an unhealthy way and do boring things from time to time. But all that happened only in my head. Then the series arrived and I understood that this was a very complicated guy, carrying the slab of a past, well, peculiar, ”says this actor and screenwriter of 54 years, whose brilliant interpretation of Saul Goodman carries almost all the responsibility that the character has deserved a long television life.

Bob Odenkirk began his career in the world of comedy. With Mr. Show, a humorous series created by him alongside David Cross (the bald brother-in-law of Arrested Development), Produced and broadcast between 1995 and 1998 by HBO, it had its first great option of making the big leap. He did not finish rising. Earlier, this Illinois-born Monty Python fan, the eldest of seven siblings, son of an alcoholic father, had gone through the mythical Saturday night Live, collaborated with Ben Stiller or Conan O’Brien and acted in some episodes of the Roseanne series. “Saturday night Live It was hard. I expected something else. I did not quite fit well. Mr. Show it was a pleasure”. After the cancellation of this project for HBO, Odenkirk chained small roles in Entourage, Arrested Development, Curb Your Enthusiasm or Weeds. “I have good taste,” jokes the actor about having been present in the best comedy series of the first decade of this century. Although almost nobody remembers that it was there. “That has been cruel, although perhaps true.”

Both around the area seemed to lead to goal. This was about to happen when it seemed that the leading role in the American version of The Office, the mythical series of Ricky Gervais, was going to be his. As half the world knows, it was for Steve Carrell. Does his supervening talent for drama come from this era? “Well, I don’t know. I don’t believe, man. I never refused to do any drama series, but I didn’t look for it, if I should be honest. What I did begin to understand, I suppose more or less at that time, is that perhaps my mood, which is much more subtle than anything else, perhaps would fit better in a dramatic environment, where I could work from the nuances and not to the gags. ” Then, he found his home: Breaking Bad.

Unlike Aaron Paul, perhaps the other actor propelled by the universal fame of Breaking bad (“I am famous in Romania, I can not believe it,” says Odenkirk), because we must not forget that Bryan Cranston already had a solid career Prior to the outbreak of the phenomenon, Odenkirk has managed to carve out a name and prestige outside the Gilligan universe. This year we have seen him in the version of Little Women Directed by Greta Gerwig. In 2017 it was the best of The Post, Steven Spielberg’s tape on the conversion of The Washington Post in a medium of global reach. There he shared cast with Tom Hanks or Meryl Streeo. “They were all very kind. They welcomed me very well. These movie people are not bad. ” Maybe his face sounded from that episode of the first season of Arrested Development in which it appears. “I don’t believe,” he replies. “My audience is in Romania, you know.”

“Masters of Sewing 4”, all in red at the welcome gala