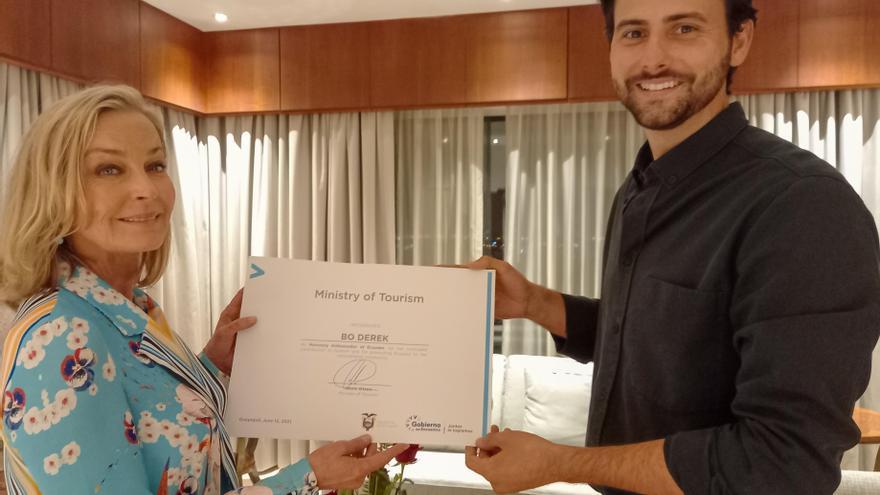 Quito, Jun 14 (EFE) .- American actress Bo Derek was named Ecuador’s tourist ambassador in recognition of her contribution to publicize the attractions of this Andean nation on an international scale, the Government reported Monday.

The designation was delivered by the Minister of Tourism, Niels Olsen, specified in a statement.

Derek, who rose to fame in 1979 with the film “10” (“10, the perfect woman”) and for which she was nominated for the Golden Globes, held a meeting with the minister in the coastal city of Guayaquil (southwest ).

During the meeting, the Ecuadorian ambassador to the United States, Ivonne Baki, was also present.

The actress, who belongs to the Foundation for the Conservation of the Galapagos, is recognized for supporting various environmental campaigns on the islands and, therefore, the document delivered highlights “the invaluable contribution she has made to tourism and the promotion of Ecuador in the international community”.

The designation as a tourism ambassador was granted within the framework of the month of the reactivation of Galapagos and was an opportunity to publicize the promotional campaign “Breathe Again” (Breathe Again), which invites tourists to visit the Galapagos Islands, an open destination, full of nature and with sustainability.

The archipelago is located about a thousand kilometers from the Ecuadorian continental coasts and was declared in 1978 as a Natural Heritage of Humanity by Unesco.

The Ministry of Tourism recognizes as tourism ambassadors the personalities who position the image of the country in the world, and it is a renewal of the commitment to continue promoting promotional campaigns that show “how wonderful Ecuador is,” says a statement.