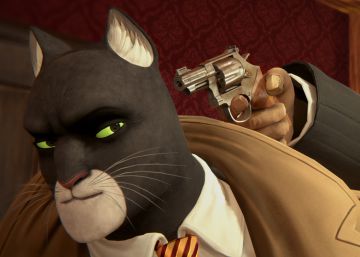 The rhino bursts into the enraged office. His impeccable suit does not hide his mood: wild, like every injured animal. The cat, however, does not flinch. It is his daily bread, it takes much more for the whiskers of detective John Blacksad to shake. He only does his job, whatever the clientele asks: in this case, to demonstrate with photographic evidence the infidelities of a husband. Just the same guy who – paradoxes of life – sports a huge horn on his snout. Although the rhino also carries a lot of money in his pocket, to bury the case and save his marriage. The decision goes to the other side of the screen: accepting or rejecting the bribe depends on the user. And it will be only the first crossroads I reserve Blacksad: Under the Skin, video game that adapts the spanish comic series not to go starring by anthropomorphic animals and focused on crimes, racism and corruption in the New York of the fifties.

The list of awards accumulated by José Díaz Canales and Juanjo Guarnido's graphic novel is overwhelming. As examples, two Eisner, the recognition of the Angouleme festival in 2004 or the National Comic Award 2014, plus hundreds of thousands of copies sold. Now, the last tribute comes from other Spanish artists: to the five adventures published on paper by Norma Editorial, Pendulo Studios Add a sixth, which is lived on PC, Playstation 4 or Xbox One. “You have to approach with lead feet to such a work. We did it with the utmost respect. We read the comics first and looked at them. We have not left the lines of the characters, but at the same time there was no point trying to capture it as it is in a different format, ”says Carlos Hernández, animation director of Pendulo Estudios, already authors of Runeway or Yesterday Origins

Thus, in its plot and its atmospheres, Blacksad: Under the Skin declares unconditional love to the graphic novel. Not for nothing, the main creative choices were agreed with the authors of the comic. “We put all the meat in the grill. It is a production 10 times larger than Yesterday Origins, ”says Hernández. Together with him, about twenty creators worked on the work.

The dynamics, however, radically mutate: from reading an adventure on a sofa to living it from the command post. The player moves John Blacksad for about twenty scenarios and about 10 hours, to investigate, analyze clues, dodge bullets and solve a case that mixes boxing, blood and mystery. Meanwhile, the decisions made influence and mark the way to one of the six available endings. Its creators define it as "an interactive drama." You can remember the usual video players The walking Dead from TellTale, or Detroit: Become Human.

Of course, in its version for Playstation 4, Blacksad suffered in its first weeks a series of technical failures that greatly complicate its enjoyment and They have ballasted their reviews. And that its launch was postponed from September to November. Hernandez regrets it and promises that the problems are being fixed. But the case, for now, remains open: not even Detective John Blacksad has been able to solve it.

Pendulo Studios seems to have taken a liking to ambitious adaptations. The next project of the Spanish developer will be to take the video game Vertigo, one of the best known films of Albert Hitchcock. “Let's give it a twist,” promises Carlos Hernández, animation director of the company.