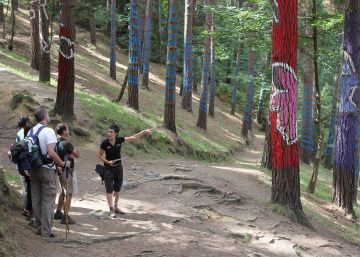 The Diputación de Bizkaia, in agreement with the painter’s family Agustín Ibarrola, has decided to create a replica of his work Painted Forest of Oma in another wooded site of the Urdaibai Biosphere Reserve, given the evidence that the pines that now house the paintings die, for old people and for being afflicted with the disease called “brown band”. This decision was announced on Wednesday by the deputy general of Bizkaia, Unai Rementeria, at a press conference accompanied by José Ibarrola, one of the sons of the Biscay painter, a prominent member of Team 57, created in Paris in 1957 by a group of Spanish artists exiled from Franco. The forest is already closed for a year and a half because it is impassable, according to the artist’s son, who explains that the deterioration is a natural process: “The forest is old and old and tends to disappear.”

The paintings were captured between 1982 and 1985 by Agustín Ibarrola (Basauri-Bizkaia, 1930) in Oma, nestled on land in the municipality of Kortezubi and close to his hamlet. It is an extensive group of brightly colored paintings made on the trunks of the pines, of which “not even half are left,” explained José Ibarrola, painter and illustrator like his father, since part of the forest was cut down by its owner within its logging activity. Ibarrola has specified, for his part, that both he and his brothers will reserve the role of vigilantes “cancerberos” so that in the reproduction that is carried out “the spirit of his work is not betrayed” and his artistic language is respected. “My father has always said that it should be that way,” he added.

Both Rementeria and José Ibarrola have admitted that the exact replica of their father’s work in the Oma forest is impossible, so they have indicated that more than a reproduction of the paintings it will be a “transfer of the concept” embodied in Oma by Ibarrola to another “nearby” forest with the aim of “keeping alive” the painter’s work. The son of Ibarrola has explained that the artistic concept that hides the Painted Forest of Oma It is “a plastic language inheritance from its passage through Team 57 when its members worked plastic concepts linked to interventions in social life”. “My father and the members of Team 57 thought, as a collective, that the work had to be at the service of society and, therefore, always had to be well visible.” Therefore, he said, the family does not “care or worry about being repainted in another forest, but we are delighted that their work is kept alive” so that it remains visible and accessible to the public.

Ibarrola stressed that both he and the family of the author, who “is not in a position” to supervise the work, will ensure that the intervention is as appropriate as possible “to his spirit of doing things.” “Let nothing be done against your criteria,” defends his son.

He has also considered that, in addition, the opportunity could be used to recover some of the paintings he made in the 80s and that the trees and of which Agustín Ibarrola kept photographic testimony were lost, and has proposed that the painted logs of the diseased trees that have to be cut down are deposited in a kind of interpretation center of the work and that is complemented with paintings and sculptures from the author’s own collection that would be willing to yield them for this purpose.

The deputy general has explained, meanwhile, that approximately 80% of the remaining pines of the Oma forest are affected by the disease of the red band or brown band, which affects the leaves of the tree leaving them of said colors. Rementeria recalled that visits to the pictorial complex are prohibited due to the poor state of the forest and has requested that this prohibition be respected because, despite it, there are people who continue trying to visit it with the consequent risk to their physical integrity.

Regarding the future location of the forest that hosts reproduction of the work of Ibarrola, Rementeria has indicated that it is not yet decided but that has to meet the requirement of being in an area of ​​similar characteristics, which is close to Oma, which, by the type of trees as per their age, it is technically feasible to translate into they reproduce the paintings, and make it an accessible enclave for visits. Questioned about whether the painted forest will remain on land of the municipal term of Kortezubi, Rementeria has not insured it and has indicated which will have to be located in the Urdaibai Biosphere Reserve. The people who will carry out the replicas have not been revealed. of the paintings.

The cultural setlist of … Xavier Sabata

After the coronavirus: how will our lives change?