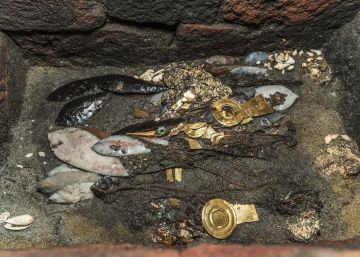 First it was a wolf, an eight month old animal buried next to 22 pieces of gold. Then one jaguar female dressed as a warrior, with an anahuatl, a wooden ring in one of its claws and a lander. And now two birds of prey, apparently two hawks, both with gold anahuatl and necklaces, one with a lance of the precious metal, fine as Bible paper, another with a kind of shield in addition to other badges. The two birds, discovered at the beginning of the month, are the protagonists of the last offering found at the base of the Old Temple of old Tenochtitlan, in Mexico, one more step on the road to the glory of archaeologists, which little by little they approach their final objective: the remains of the Mexican emperors.

Consecrated to the Aztec god of war, Huitzilopochtli, the three offerings have appeared on the same line, the imaginary line that cuts in two a building adjacent to the Templo Mayor, a huge circular platform of 16 meters in diameter and more than two of known height like Cuauhxicalco. The last one, that of the hawks, appears right in the center of the platform, embedded between stones, near the surface. Offerings with dressed animals are rare. Of the more than 200 studied in more than 40 years of excavations, only 28 contained animals dressed in ornaments and badges: 12 golden eagles, seven wolves, seven pumas and two jaguars. The two hawks are now added to this select list.

Jumping between wooden planks placed as walkways between excavation areas, the director of the Templo Mayor project, Leonardo López Luján, he explains to EL PAÍS that "the richness and variety of these three offerings are exceptional, the sample of a time of globalization in which animals and objects were imported from all the confines of the Mexican empire and beyond, hundreds of kilometers away."

López Luján speaks of the period of greatest splendor of the empire, the second half of the fifteenth century and the first 19 years of the XVI – when the Spaniards arrived – when the Aztecs dominated much of the center of what is now Mexico, the north and the South. It is not just the animals and the gold of the offerings. The remains of corals from both oceans, mother of pearl shells, starfish, puffer fish and snails point to delicate collection processes. A careful supraterrenal communication exercises.

In addition to illustrating the power of the Mexicans, the richness of the offerings could indicate the imminence of the great discovery. With a small mouth, without generating too many expectations, López Luján and his predecessor in the Templo Mayor Project, Eduardo Matos Moctezuma, have been suggesting for years that the remains of Ahuítzotl, Axayácatl or Tízoc, predecessors of Moctezuma Xocoyotzin, could be buried there. "Chroniclers like Bernal Díaz del Castillo or Fray Diego Durán mention that Mexicans buried their rulers in Cuauhxicalco," says López Luján.

In any case, the road will be long. Practicing archeology in the Templo Mayor — anywhere, really — is slow, necessarily slow. Each offering takes months, even years of analysis. The hawks began to work in January of this year and are unlikely to end before Christmas holidays.

Alejandra Aguirre, who has been in charge of the excavation, explains that to get from the first layer of sediment to the last one, where they finally found the hawks, they had to dress – again – of expert surgeons: firm pulse, rake and Brushes. First a layer of large copal bars appeared, then several of corals, shells and other marine organisms, then another of Strombus snails, large as papayas, and finally, in the background, the two birds of prey dressed in gold, next to the spines of several snakes and the skeleton of a small shark.

Moving from one layer to another, explained this week another of the archaeologists in charge of the excavation, Antonio Marín, is almost like embarking on a micro-scale move. Everything must be removed and packaged with the greatest care. 500 years of rest and stillness to go now in a hurry!

Although there is no stone that is of no interest to archaeologists, the knot of this adventure will come in a while, also the outcome. Offerings, gold, birds, are just the preamble. The story will begin when the researchers delve deeper into the Cuauhxicalco, when they descend a step in its more than two meters deep. López Luján compares the building with a giant camembert. "We are in the mere center of the Cuauhxicalco camembert," he says, amused. "And maybe this is the place, but below."