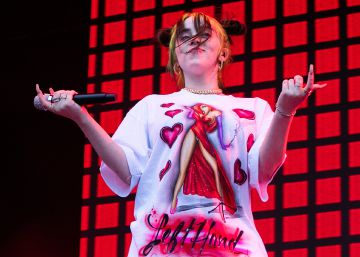 He needed only four songs to teach much of his arguments, many. It started scary with Bad guy, but you could barely hear her mumbled voice because the entire Sant Jordi, full, sang wildly and buried her. Continued with My Strange Addiction, a more colorful pop piece that matched both the color of her hair, green and black, girded by two ponytails, like that of her baggy wardrobe, an informal print on an orange base. He continued with another gloomy piece, illustrated with spiders on the screens and at the base of the stage, but this You Should See Me In A Crown It was received as another catchy song, as if the spiders were only afraid of adults who were not there. The fourth piece was a ballad, Idontwannabeyouanymore, with an improper letter of ballads, in the antipodes of romanticism, for Billie Eilish something as useless as being one more star. And it is not. On the night of yesterday, in the first of her two concerts in Spain, the American teenager showed the other side of pop, probably the one that asks for the passage of the hand of a new generation whose feelings she has managed to capture.

Its appearance, wide clothing that blurs its forms and moves away the sexual icon; his way of moving around the scene, directly, without appealing to elegance, simply by jumping or bracing to accentuate the rhythm; his lyrics, transmitters of a certain uneasiness, a lot of nonconformity and quintals of personality and his style as a vocalist, whispering the letters, letting the words go dimly but without indolence, drew the pattern of a new pop star, who remembered with his hairstyle and clothes a lot of Pipi Longstocking much more murky and tormented. Because that's how many of the songs that made it popular sounded, gloomy songs, stained with the melancholy that is felt by what has never been achieved and that does not move to protest screaming, but twisting pop with bases influenced by the hip hop and electronics and singing softly because in times of noise screaming more only makes you one more. Singing I only listen to you who should.

But despite the partially gloomy portrait of the star, his concert was a jovial pop celebration. All the songs were celebrated by the public with the conviction of who has found the same one there, on stage, looked like a normal girl with the problems of normal girls. But not normal Ed Sheeran type, flat, normal because Eilish has suffered and tells, has suffered ailments and is tired of being considered nothing more than a 17 year old baby. Yes, the youngest have it all, nothing they lack and the opportunities, they say, open up before them, but something must squeak when the new pop is gloomy and its priestess looks wistfully, restlessly.