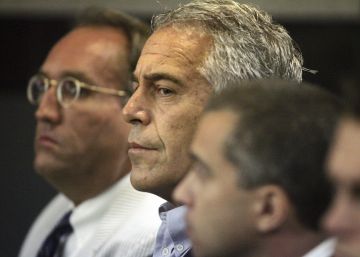 The mogul Jeffrey Epstein has been formally charged with a charge of sex trafficking of minors and another of conspiracy, for which he can be sentenced to 45 years in prison. The fund manager, friend of Donald Trump and former President Bill Clinton, managed to avoid federal charges for more than a decade for his pedophile plot, with which he recruited dozens of girls to exploit them. On Saturday he was arrested when he returned from France. The fund manager's lawyers say he will plead not guilty, but prosecutors want him to remain in prison until the trial is held because of the high risk of escape.

Epstein, according to the investigation, paid dozens of minors between 2002 and 2005 for massages, blow jobs and other sexual acts. He moved them to their residences in New York and Florida from other states, a federal offense that does not prescribe. The accusations thus include crimes that were excluded from the controversial secret pact that allowed him to avoid federal charges in 2008 and is backed by new evidence, such as pictures of naked minors found during a search.

For more than a decade, abuses by Epstein were the subject of lawsuits on the part of the victims, investigations by local and federal authorities as well as multiple reports in the press. The executive used his associates and the victims themselves to recruit new girls who were going to explode sexually. His case, however, was absent from the debate that triggered the MeToo movement.

The charges are now collected in a 14-page document, which has been published this Monday a few hours before Epstein appears before the New York court. "For many years, Jeffrey Epstein sexually exploited and abused dozens of young girls at his home in Manhattan and Palm Beach, among other places, "describes the grand jury car, which states that the youngest victim was 14 years old.

In this way, he adds, exposing the pyramidal plot, "created and maintained a network of minor victims" in several states that, because of their age, were "particularly vulnerable to being exploited". "He knew that many of his victims were under 18 years of age," the document states, indicating that some of the girls "expressly told him their age." His associates contacted the victims and organized the meetings.

The accused, according to the charges, paid them "hundreds of dollars" for their services. At first I recruited them to do massages, which were performed totally or partially naked, to later evolve towards more sexual behavior. At the same time, it encouraged them to recruit other girls for cash, "thus maintaining a steady supply of new victims."

Prosecutor Geoffrey Berman told a news conference that the criminal conduct of Jeffrey Epstein "hits the conscience." "The voice of the victims deserves to be heard," he said. William Sweeney, special agent in charge of the FBI in New York, makes it clear that his office will pursue "these predators regardless of their power or the relationships they have." "There is no excuse," he added.

The charges do not cite the names of the minors who were subject to the sexual exploitation scheme, one in New York and two in Florida, or the three employees or associates who participated who conspired with the fund manager. That does not exclude that the authorities are not going to bring charges against other people who facilitated the competing of these offenses. The prosecution asks, in parallel, to confiscate the two properties where the crime was committed.

Jeffrey Epstein, friend of Donald Trump, Bill Clinton and the Duke of York, worked at the extinct investment bank Bear Stearns for six years. In 1982 he became independent and created his own fund, which managed the investments of powerful clients such as Leslie Wexner, founder of Limited Brands. He currently resides in the Virgin Islands. The mansion that has in the Upper East Side of New York is valued at 50 million. It has properties in Paris and New Mexico.

The employer was the subject of a first complaint in 2005, when the parents of a girl of 14 years went to the police in Palm Beach (Florida) after being sexually abused. The FBI identified more than thirty potential victims, most of them between 13 and 16 years old. Many of them were from low-income families. Epstein said the meetings were spoiled and I did not know they were minors.

The prosecutor's office in Miami, which was then headed by Alex Acosta, current Secretary of Employment, finally reached a pact with Jeffrey Epstein that allowed him to avoid federal charges in exchange for pleading guilty to having prostituted a child. He was 13 months in prison and entered the registry of sex offenders. The terms of the agreement in 2008 were kept secret.

Acosta was personally involved in the negotiations. He defended later that the pact was better than if a trial had been held, because he said that the chances of winning it were reduced. Prosecutors in the Southern District of New York continued, however, to pursue their own investigation. On Saturday, after his arrest, they registered his residence, anticipating that new charges would be filed.

In parallel, the federal judge ruled in February that prosecutors in Miami violated the victims' right not to communicate the terms of the agreement. That opened the door for him to be prosecuted for the original charges and shed new light on the scope of the pedophile plot. An appeals court has also just authorized the declassification of 2,000 pages of documents.

The New York authorities now expect other victims to come forward and report the abuses, as well as witnesses who can help them shore up the cause further. "The investigation continues," prosecutor Berman concluded, "if they have evidence or information call the FBI." Sweeney also highlighted the importance in this case of the research work carried out by the press.