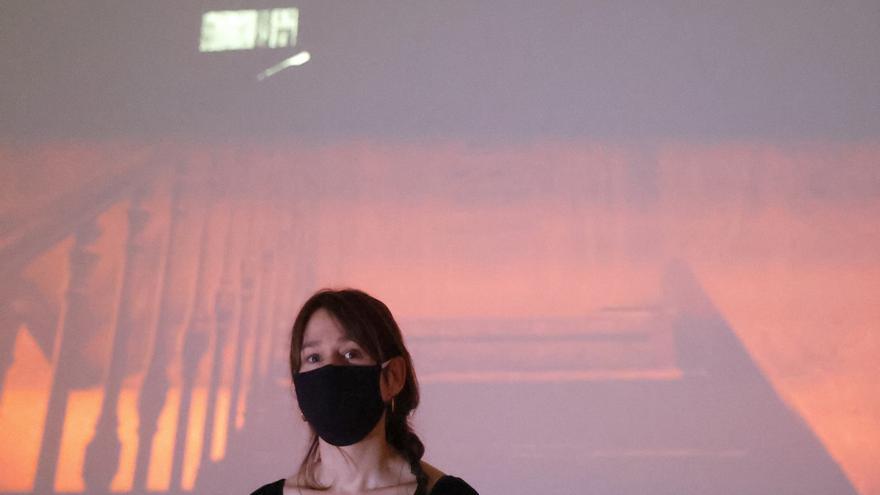 Bilbao, Feb 19 (EFE) .- Two short films, one of them shot during the pandemic between Extremadura and Brussels, and a tuning fork that vibrates continuously are the proposals of the exhibition “There is a law, there is a hand, there is a song “, by Bilbao artist Alex Reynolds, which can be seen from this Friday at the Guggenheim Museum Bilbao.

The show is the first exhibition of 2021 in the Film & Video room, the Basque art gallery space dedicated to video art.

“The hand that sings”, the 22-minute work that occupies the main gallery of the room, carried out in collaboration with the Swedish choreographer Alma Södeberg, is premiered internationally. “It seems to us quite an achievement to be able to have finished the film and to be able to be here,” said the Bilbao artist, who lives and works between Brussels and Berlin.

Reynolds explained that the initial intention is for the film to be shot entirely in Extremadura, but the pandemic brought with it difficulties to travel before the summer, so it had to be completed for four days in Brussels, where both artists met.

“It is a film that for me has something miraculous having made it in a pandemic and that in the end it is such a luminous and musical film,” the creator acknowledged.

“The hand that sings” is formed by gestures, voices and images connected in time and that blend in with each other: From the process of extracting the bark of the Extremaduran cork oak for the annual cork harvesting, to the act of peeling an orange with the dim light provided by matches, through washing a person’s hand or the feedback that occurs between the singer’s song and the movements of her hands.

With this work, the artist has set the goal of “looking, caring for and paying attention to the musicality within an image or the image that a word can generate”.

“Palais”, of 34 minutes, is the second of the visual proposals of the exhibition, in which Reynolds herself walks through the Palace of Justice in Brussels, “a kind of delirium of grandeur”, in the words of the Bilbao, built to late 19th century, “very labyrinthine, with rooms that impose and make the body feel very small and intimidated”.

“I was going through it for a few days, with a very small camera, and hiding and trying to sneak into all the places where I got access,” said Reynolds, for whom the building “has a bit terrifying places, hence there are moments reminiscent of a horror movie. ”

For the artist, all the “recesses” of the palace, “designed to have a particular effect on the body”, which can be either confusing or intimidating, “can be a caricature of the aberration of the bureaucracy and the system. legal”.

Finally, a tuning fork (a fork-shaped device used as a reference for tuning musical instruments) that vibrates slightly perceptibly in the air is placed in the room next to the projection of “Palais.

“It is a tuning fork modified so that it sounds at the same frequency as the voice of a person who is close to me,” he said about the piece, which he called “Justine”, like the woman he was inspired by.