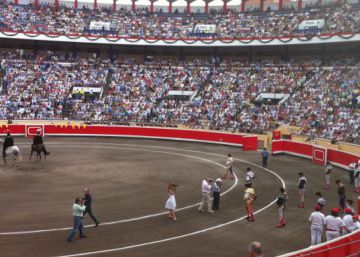 The company Arte, Toreo y Cultura BMF, the only one submitted to the Bilbao bullring lease contest, has made an offer of € 250,000 per year, as discovered at the opening of the tenders made after 8.30 am today, today August 7, by the Contracting Board of the municipality of Bilbao. The event was attended, on behalf of the company, Pablo Martínez Labiano and Manuel Martínez Azcárate, as members of the Chopera House, and Antonio Barrera, representative of the Ballieres group.

In this way, the city council ensures the entry of an important figure for the operation of a building that gave greater benefits a few years ago, but which in recent years has brought economic losses, with the consequent political problem for the mayor from the capital of Biscay.

The figure required by the municipal document was € 105,000, so the BMF company bet is more than double the minimum set and, more importantly, denotes a determined position to revitalize the Bilbao square, which needs a boost in all aspects, from the number of celebrations to the modernization of its management and promotion. The lease term will be 15 years, so the Bilbao City Council secures € 3,750,000 for this infrastructure regardless of the corresponding IPC revisions and the activities that will be generated in the building during this long period.

The rest of the technical aspects reflected in the specifications, those referring to the offer of bullfighting shows, other leisure events and the renovation works that will be carried out in Vista Alegre, have been at the expense of the study that the different technical committees must carry out with in order to check if they meet the minimum requirements in the specifications. The envelope that collects this data could not be displayed at the opening due to technical problems and is already in the hands of the specific committees. A pure procedure after only one company has been submitted.

Based on the economic amount offered, the company's representatives confirmed to El País that the bullfighting offer has the same level of ambition and demand, as can be verified when the data is public. They also insisted that Bilbao is an illusion for the companies they represent and that they have worked very enthusiastically on the offer presented.

In the absence of ten days for the start of the General Corridas de Bilbao, the fans have already verified that the contest of lease of the bullring has taken its final step. The people of Bilbao, who have been waiting for this process for two years, have lived with disappointment that has only been of interest to a company, but also with the hope that the offer presented seems solid in the economic sphere and is presumed ambitious in the bullfighting aspect.

The Contracting Board already rejected the three appeals submitted to the specifications ten days ago. One, by a group of anti-bullfighters for the non-performance of shows; another, on the part of four businessmen from different Spanish squares, who appealed that the specifications did not respect "the free forced participation in the European economic world", and the third, by the Nautalia company, which saw subjective aspects in the scoring of the offers .

Therefore, if ordinary justice is not claimed now, the outcome of the contest will end in the next few days in favor of the company composed by Casa Chopera and Ballieres for the next 15 years, with the possibility of five more as an extension. And as reflected in the opening of the offer made today, the group's proposal will be attractive and ambitious.