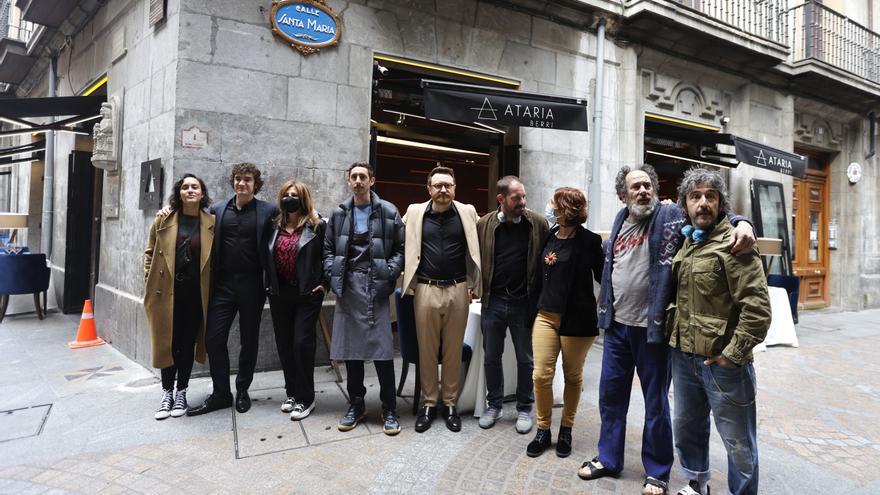 Bilbao, May 25 (EFE) .- The old town of Bilbao has become for two weeks on the set of “La vida padre”, the new comedy by Joaquín Mazón, whose plot focuses on the world of gastronomy, which unites the two protagonists of the film.

“It is a comedy that narrates the journey of two people who do not know each other, meet again and have to connect through what unites them, which is the kitchen,” Mazón explained to journalists during a break from filming.

It is not Mazón’s first comedy, which in 2016 premiered “Elite Body”, his first feature film, also shot in the capital of Biscay.

“I really wanted to go back,” he acknowledged, and pointed out that Bilbao “is the ideal setting” to reflect the transformation of the protagonists and “is still just another character in the film.”

The comedy is starring Karra Elejalde and Enric Auquer, who this Tuesday filmed in a restaurant in Casco Viejo, converted from early in the morning into the setting of the film and where the third and last week of filming in the city has begun.

Cameras, microphones, extras and a gigantic awning to control the light have occupied the intersection between Calle Santa María and Calle de El Perro for several hours, under the curious gazes of the neighbors who saw their traditional restaurant transformed into the Ataria Berri , Mikel’s restaurant, a character played by Enric Auquer in the film.

In the film, Mikel Intxausti, a young and ambitious successful chef, will unexpectedly receive a visit from his father, Juan (Karra Elejalde), whom he has not seen for thirty years, who suffers an amnesia that makes him believe that he still lives in the Bilbao of the 90s and who will have to take care of it.

The story, written by Joaquín Oristrell, takes place in Bilbao, but after this third week of filming in the town, the team will travel to Madrid to record set and interior scenes during the month of June.

Karra Elejalde has been “very happy” to shoot in the capital of Biscay and to be able to play the character of Juan Intxausti, whom he has described as “a man who lives trapped between two worlds.”

In addition, he has said that he feels “very comfortable” within a plot linked to the kitchen, which has always “excited” him, and “grateful” to work with “such a wonderful actor as Enric Auquer”.

The compliments are mutual. Auquer, who won the Goya for Best New Actor in 2019 for “Quien a Hierro Mata”, has fondly described Elejalde as someone “grotesquely charming” and with whom it is “very easy” to do comedy.

“It is important to make people laugh and it is very difficult,” said Auquer, who is entering comedy for the first time, “a genre that is sometimes discredited, but very interesting and with a great depth of work,” he described.

In “Who kills iron”, Auquer also played the role of son, and now he has to do it in a comic key in “La Vida Padre”, a film that, in his words, “tries to reconcile present and past through the kitchen , which will reflect the character’s state of mind ”.

As gastronomy and the culinary world are two of the main elements of the plot, during the filming they have also counted on the Alava chef Diego Guerrero, who advises the management team so that the scenes are as real as possible.

In the sequence that was recorded this Tuesday in the Old Town of Bilbao, in addition to the two protagonists, they have filmed Megan Montaner, Maribel Salas, Lander Otaola and Manuel Burque.

Montaner, who in 2017 already entered comedy with the film “Lord, give me patience”, now plays the character of Nagore Mondragón, “a very passionate doctor, obsessed with work and dry in personal relationships,” as described the actress herself.

For her part, Maribel Salas will be Rosa, the wife of the character of Elejalde, Manuel Burque will appear in the role of refined gastronomic critic and Lander Otaola will play Mikel’s brother (Enric Auquer).

“La Vida Padre”, produced by MOD producciones, has the support of the Bilbao City Council, the Provincial Council of Bizkaia and the Bilbao Bizkaia Film Commission, and its premiere is scheduled for 2022.