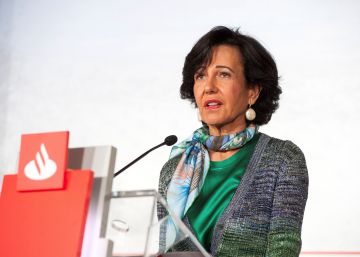 In the end, banks have fared better than expected in the presentation of their results for 2020, which has been rewarded on the stock market. Among the six largest Spanish banks (Santander, BBVA, CaixaBank, Bankia, Sabadell and Bankinter), they added losses of 5,536 million euros, consequence of the red numbers of 8,771 million euros of Banco Santander, the first in its history, which from now on will prevent its president, Ana Botín, from including in her speech that of “Santander has never presented losses.”

But despite this collapse in results, financial institutions have presented better results than expected by analysts, and have managed to complete a record fourth quarter in business. The Stock Exchange has offset these accounts of the Covid year with a rise in the sector of 10%, which has added 10,166 million euros to its capitalization since Bankia presented its results on January 28.

Meanwhile, delinquency has continued to decline, although all bankers have agreed that in the last part of this year, and after completing the palliative measures of the economy, such as moratoriums, ERTE, guarantees of ICO credits, the unpaid will rise. “And if it is not in the last semester, it will be in the first quarter of 2022, once the new direct aid for companies and the self-employed that the Government announced last Friday has ended,” explained on Saturday a financial manager of a large entity .

These will be the latest results for Bankia, which will merge with CaixaBank in March. The entity will cease to exist with the highest capital ratio of large banks after generating more capital in 2020 than the other four large banks combined.

By the way, a note. At the Banco Santander press conference, held online last Wednesday, Botín asked journalists to “please”, we tuteásemos “because it sounds very old to me.” This proposal, which may not be important to anyone or go unnoticed, caught my attention. Few businessmen or bankers, and even politicians ask those attending an event or press conference to be tuteened, although after these meetings the protagonists usually loosen protocol.

Despite the fact that the Government has announced the launch
direct aid,
the debate on
what is considered direct help
It has not been closed

And it is that Ana Botín seems that after a few years, she has managed to relax in the press conferences. In fact, she has become one of the businesswomen who use social networks the most and who try to contact people through advertisements, television programs (we must remember the one who starred last year with Jesús Calleja in Planeta Calleja), or mediating through letters so that a prisoner can apologize to a director of a Banco Santander office, who robbed him at gunpoint. All this is unusual, and it seems fine to me, although it still catches my attention.

Changing the subject. The companies that have come to their bank to extend the repayment term of their ICO loans from five to eight years, after the Government has relaxed the regulations on these loans and extended the grace period by one year, have had an unpleasant surprise. They have seen how by lengthening the terms the interest rate becomes more expensive if the financing exceeds 800,000 euros. Requesting more absence does not imply a cost.

Notice to navigators. Extending the term of the credits has an extra price.

Continuing with the aid, on Friday the Economy sent a long-awaited statement in which it announced that the Government will reform the legal framework in order to increase direct aid to the self-employed and companies. This was a claim that had been on the Executive table for months by businessmen, associations and banks. The hardening and lengthening of the pandemic are causing the fall of thousands of firms, especially micro-businesses, which are undermining a very important part of the Spanish business fabric.

In the last quarter alone, companies and families in bankruptcy soared by 45%, according to the Bankruptcy Procedure Statistics of the National Institute of Statistics (INE).
The objective of the Government is to protect the productive fabric and employment to have a base as robust as possible to promote the recovery, according to the thesis that the president of Banco Santander presented last Wednesday when she publicly demanded the implementation of direct aid.

The point is that the Economy talks about subsidies, credit cuts, the payment of certain expenses, but not the injection of capital directly into SMEs and the self-employed, doubt that remains in the air. But several knowledgeable sources of the negotiations that are being carried out between the Executive and businessmen and banks assure that the Government’s statement is very positive and will allow the salvation of thousands of SMEs and freelancers, “but they are not direct aid.” And they allude to the fact that in the Executive the differences continue, and that the head of the Economy, Nadia Calviño, “is not yet convinced of taking measures to grant direct aid, which is understood by injecting capital, to small and medium-sized companies and the self-employed ”.

In the ministry, however, they assure that the debate is to save companies and that the measures announced and that will be launched in a few weeks are intended to prevent the fall of SMEs.

According to expert calculations, the confinements and restrictions since last summer until now have been much more selective, and there has not been a total confinement of the economy like the one that occurred between March and June 2020, there is almost 70% of the industrial fabric that is practically at pre-crisis levels. This means that if you selectively help the companies that need it most, it will be easier to get out of this tsunami.

One of the measures that the Government is considering launching for medium-sized companies, and that in some way is already used by SEPI, are participative loans, a hybrid that remunerates the lender based on the progress of the loan. company. The ICO already uses this formula recurrently with a grace period in the first years, long repayment terms adopted for projects, with a fixed remuneration and another variable depending on the results of the company.