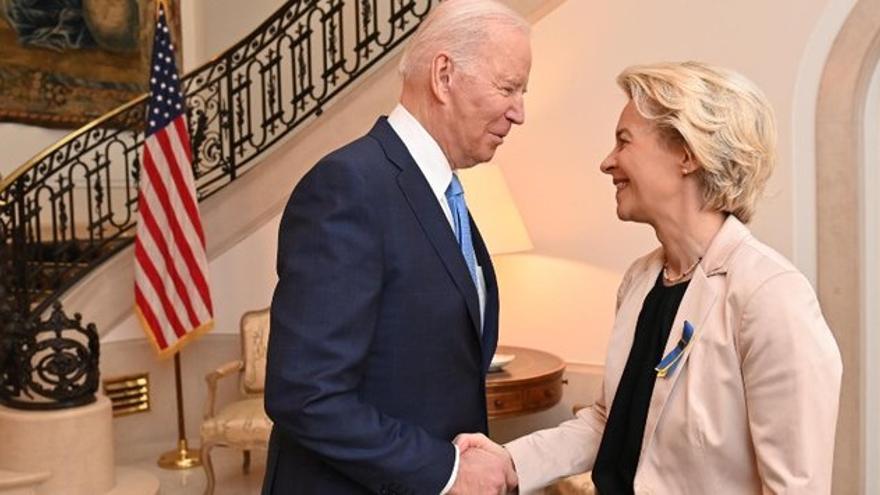 There are two ways to end dependence on Russian gas, explains the European Commission: change suppliers and reduce the consumption of fossil fuels by accelerating the energy transition to renewable energies. Thus, this Friday the president of the Community Executive, Ursula von der Leyen, and the president of the United States, Joe Biden, have presented an agreement that affects the substitution of suppliers. In other words, the White House is committed to increasing the amount of liquefied gas supplied by the United States. Until now, the EU bought some 22,000 million cubic meters of liquefied natural gas a year from the US. And, according to the agreement announced this Friday, the US is committed to increasing that figure by 15,000 million during 2022, and by another 50,000 million cubic meters per year between now and 2030.

The EU imports 155 billion cubic meters of Russian gas annually, some 15 billion of them liquefied natural gas. And the commitment of the European Commission, announced on March 8, consisted of trying to reduce dependence on gas by two thirds throughout this year as the first step to ending Russian purchases.

According to the European Commission, “the US and the EU are committed to meeting the objectives of the Paris Agreement, achieving the goal of zero net emissions by 2050 and maintaining a limit of 1.5 degrees Celsius on the increase in temperature through a transition of clean and renewable energies, and energy efficiency. These policies and technologies will also help make the EU independent of Russian fossil fuels. Natural gas remains an important part of the EU energy system in the green transition by ensuring that carbon decreases over time."

According to the agreement, “the United States will strive to guarantee, also with international partners, additional volumes of liquefied natural gas (LNG) for the EU market of at least 15 bcm [15.000 millones de metros cúbicos] in 2022, with increases in the future.”

Furthermore, “The United States is committed to maintaining a regulatory environment conducive to allowing any additional LNG export capacity needed to meet this emergency security of supply goal and support European goals of ending the EU’s dependence on the fuels.” Russian fossils by 2027”.

The European Commission, for its part, is committed to working with the governments of the Member States “to accelerate their regulatory procedures for the import of LNG, including onshore facilities and pipelines using floating storage regasification units and fixed LNG import terminals. LNG”.

The Community Executive also states that "it will work with the Member States and market operators to group the demand through a new European energy platform for the additional volumes between April and October 2022. The European Commission will work with the Member States to ensure stable demand for additional US liquefied natural gas until at least 2030 of approximately 50 bcm/year, with the understanding that the pricing formula for LNG supplies to the EU must reflect long-term market fundamentals, and stability of cooperation on the demand and supply sides, and that this growth is consistent with our shared goals of net zero emissions.”

The transatlantic partnership stands stronger than ever.

In a world faced with disorder, our unity upholds fundamental values ​​and rules that our citizens believe in.

And we are determined to stand up against Russia's brutal war.
https://t.co/EbO9c3R7Mt

Brussels recalls that it is preparing a regulatory framework for the security of energy supply and storage: "The European Commission has proposed a regulation to guarantee that storage is at 90% of its capacity before November 1 of each year, with specific provisions of gradual incorporation by 2022”.

In addition to the switching path, the US and EU commit to “reducing overall gas demand through clean energy acceleration: increasing demand response devices (such as smart thermostats) and pump deployment and installations.” of heat, scale the acquisition of clean energy equipment, invest in innovative technologies and switch fuel from fossil fuels; accelerate the planning and approval of renewable energy projects and strategic energy cooperation with offshore wind technologies; accelerate the deployment of clean energy technologies, including an expansion of solar and wind power; advancing the production and use of clean, renewable hydrogen to displace fossil fuels and reduce greenhouse gas emissions, with investment in the development of supporting technology and infrastructure.”