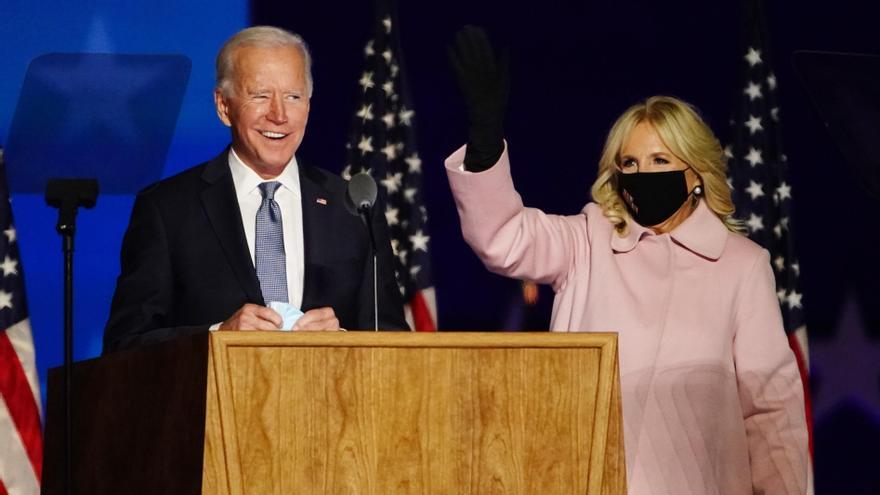 The first term of Donald Trump has led to a long and tense count due to the pandemic in a country mobilized, divided and easy prey to disinformation. The scrutiny is being unusually long due to the soaring turnout and the avalanche of vote-by-mail, but after a night of uncertainty Joe Biden is emerging as the winner.

Never have so many millions of Americans voted. In the absence of the final data, it is estimated that the participation was 67%. This percentage is the absolute record since universal suffrage exists in the United States. The previous mark was in 1960, in the elections in which John F. Kennedy defeated Richard Nixon with a participation of 63%.

Both Democrats and Republicans were highly mobilized across the country. Yet many more voted for Biden, who has already received more than 70 million votes, more than any other candidate in history (the previous record was set by Barack Obama in 2008). She will also win by a greater margin of votes than Hillary Clinton, who already won almost three million more votes than her rival but who was not elected president because she did not get enough in key states to reach the White House according to the electoral system of United States.

In Biden’s case, the former vice president does have more votes in some of the disputed states and therefore decisive to win the election. In particular, there are two differences from 2016: Arizona, a traditionally Republican state, and the Midwest, three of whose states gave Trump the victory in 2016.

Biden has won in Wisconsin and in Michigan he leads with the almost complete recount and now awaits the result in Pennsylvania, pending the vote by mail and part of the vote of the big cities, which tends to favor Democratic candidates. Clinton lost in these three states by a few thousand votes in 2016, and that cost him the presidency.

That night in 2016, in a shorter count, we learned the result after midnight, but there were not so many votes to count and not so much early voting to process, in particular vote by mail, which involves an added verification process.

Fear of the contagion of coronavirus pushed millions of people to ask to vote remotely or earlier to avoid the long lines and waits that are often formed in the United States on election day. This is how more than 100 million people voted throughout the country, which is not used to a challenge of this dimension.

The added problem for Wisconsin and Pennsylvania, for example, is that by law they cannot start counting votes that arrive in the mail until Election Day. Pennsylvania estimates that it will finish counting this Friday. In Michigan, they started counting the mail-in vote the day before the election, according to their rules.

Other states, like Florida, count the votes as they arrive so they don’t have as much work on Election Day and can finish the vote earlier. For this reason, AP, the news agency that gives the vote estimates in the United States, was able to give Trump the winner in this state on the same night as the elections.

The most feared scenario

Trump’s victory in Florida mixed with uncertainty over the late recount in the Midwest was the most feared scenario due to the possibility that the president would break democratic rules and rush to declare himself the winner without having the necessary votes, such as a way to encourage your supporters and prepare the ground for complaints in court. A few hours before the election, the White House denied that Trump was going to do it, but it is just what he did.

The president came out to speak surrounded by a crowd without masks in one of the halls of the White House, in an unprecedented use of the institution on an election night. There he proclaimed that he had won in states where millions of key votes were still pending and that he had “sincerely” won the elections without any fact supporting his words. Trump had raised expectations but many votes remained to be counted.

During the day, there was some nuance in his words with a certain recognition of defeat. He falsely claimed that his votes were “magically disappearing,” though that magic was simply the recount and the fact that the postal vote, which takes the longest to count, is skewed disproportionately toward the Democrats. Among other things, because Trump himself told his voters not to vote by mail.

Beyond the false information about Trump, which even his own vice president avoided emulating on Tuesday night, what can paralyze the election of a winner or the transfer of powers are the requests for a recount in several states if the result it is very tight and the battle to invalidate ballots or question special local rules due to the pandemic.

Trump’s campaign has already announced this Wednesday that will ask for the recount in Wisconsin, something that any candidate in this state can do if the difference in vote between the winner and the second is less than 1%. He has also announced a complaint in Michigan to stop the scrutiny.

Some of these disputes could reach the Supreme Court, where conservatives have a majority (although judges are not required to respect the wishes of the party whose president appointed them).

As the tally continues, races have been tighter than polls anticipated, particularly again in the Midwest. In the end they may have guessed the winner in the three states of that region, but with less margin than they predicted.

Final results are also pending in Arizona and Nevada, where the tally indicates that Biden will win, and North Carolina and Georgia, where Trump’s victory is more likely.

Biden has mobilized more voters than Clinton in almost every state. But in some it has suffered a certain disinterest on the part of the Latino community.

In some of the Texas counties that Hillary Clinton won in 2016 and where there was significant representation of Hispanic voters, Biden has drawn fewer votes. Also relevant is his victory in Miami County by much less margin than Clinton’s. In 2016, the Democrat won it by 30 points and now Biden only has done it for seven. The Cuban-American community has particularly mobilized in favor of Trump this year, but that hardly explains such a steep decline from 2016.

In any case, whoever is the winner in these circumstances will find themselves in a very difficult country to manage.

The pandemic that has killed more than 230,000 people remains unchecked throughout most of the country. The period in which the transfer of powers must take place coincides with the most difficult months of the epidemic, the worst to make changes or to have a president angry because he has to leave.

These elections have also underlined the idea of ​​a country that continues to be divided into two halves, that share very few values, that are not capable of dialogue between them and between which a reconciliation seems difficult.