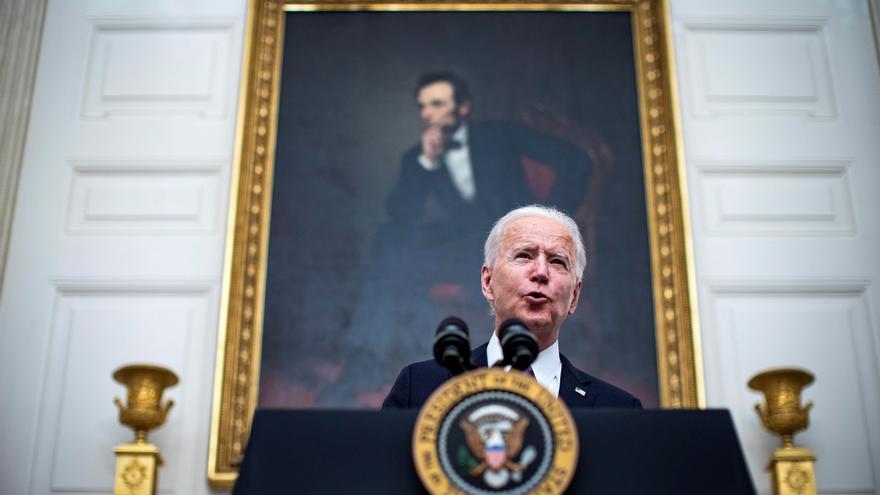 The president of United States, Joe biden, has launched this Thursday what it has described as a "wartime" strategy to contain the pandemic, which includes the obligation of quarantine for travelers arriving in the country from abroad and the obligation to wear a mask on airplanes.

On his first day in power, Biden focused on the most urgent challenge facing his administration: a pandemic that has left more deaths in the United States than in any other country and whose threat he constantly downplayed his predecessor, Donald Trump. "More than 400,000 Americans. They are more than those who died in World War II. This is a wartime task, "Biden said during an event at the White House.

"Months to turn around" the situation

The new president has warned that the death toll from COVID-19 in his country will probably exceed 500,000 in February, and has acknowledged that it will take his government "months to turn around" the situation.

"Over the past year, we have not been able to rely on the federal government to act with the urgency, focus and coordination that we need, and we have seen the tragic cost of that failure," Biden said.

The president has particularly condemned the implementation of the vaccination campaign, which he describes as "a deplorable failure", since in more than a month only 17.5 million have been administered of the 37.9 million available doses of Pfizer and Moderna preparations, the first authorized in the country. "The truth is that it is going to take months to vaccinate most Americans."

The strategy against COVID-19 that Biden's team has inherited is "much worse than they could have imagined, "according to Jeff Zients, the new coordinator of the White House response against COVID-19." The lack of cooperation from the Trump administration has been an impediment, they did not give us the visibility we expected have on vaccine supplies, "Zients told the daily The New York Times.

The 200-page plan published this Thursday by Biden, has among its objectives to accelerate the manufacture, distribution and administration of vaccines, guarantee their access by all Americans without discrimination and combat the skepticism of those who do not want to receive the injection. .

The federal government plans to collaborate with the states to create "all the vaccination centers that are needed," including the provision of stadiums and conference centers, according to a summary of the plan.

In addition, Biden ordered his government to turn to the Defense Production Act, legislation adopted in 1950 in response to the Korean War, to mobilize the industrial sector and accelerate the manufacture of masks, respirators and other equipment against the pandemic.

Experts believe that this measure will not help too much to accelerate the production of the vaccine, because manufacturing capacity is already at maximum, but the White House assured that activating this law will help, for example, to increase the manufacture of a special syringe that allows you to get six doses of each vial of Pfizer, instead of five.

Biden has promised that the United States will administer 100 million doses of the vaccine in his first 100 days in office, a goal that many consider low, because by the end of that term on April 29, the federal government should have already available at least 200 million units.

The new president responded annoyed to a journalist's question when he questioned his objective, calling it unambitious, "When I announced it, they told me it was not possible. Come on, give me a break, man," Biden said.

Requirements for travelers from abroad

Biden's strategy, in addition to combating the pandemic, seeks to contain its expansion, and one of the ten decrees he signed this Thursday establishes that those who want to travel to the United States from abroad must take a COVID-19 test before flying, and quarantine once they arrive in the country.

The United States Centers for Disease Control and Prevention (CDC) announced last week the requirement for a negative test of coronavirus before flying to the country, and Biden's decree asks his team to review that order in case it is necessary to further toughen the conditions to be tested.

Biden's measure also asks his cabinet to negotiate with the Governments of Mexico and Canada on the possibility of strengthening public health protocols for entry to the United States by land, now closed.

That same decree ordered the mandatory use of masks in airports and in most planes, trains, ships and buses of medium and long distance in the country, something that Trump refused to do and that many airlines and state authorities have demanded for months and local.

The success of Biden's strategy will depend in part on whether Congress approves his $ 1.9 trillion stimulus package, which includes significant funding to fight the pandemic but does not appear to fully convince the Republican opposition, which controls half of the seats in the Senate.