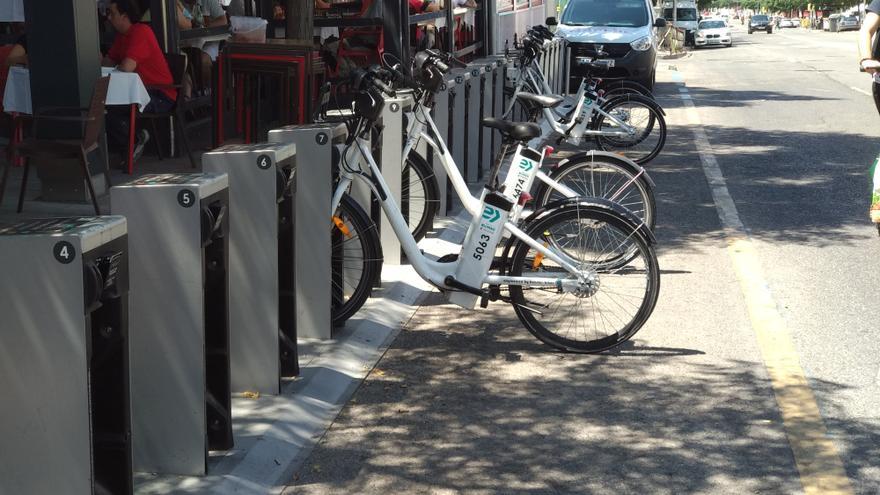 In the motorized streets of Madrid, an unusual civic advance has been consolidating in recent years, with many nuances: cars were beginning to get used to the presence of bicycles. The honking of horns and the feeling of impending conflict at each intersection gave way, very slowly, to the European custom of giving way. The implementation of the electric bicycles of the BiciMAD public service had a lot to do with this, which gradually managed to integrate into the urban landscape. Vicente León, 64 years old and a cyclist in his youth, became a loyal user and quit the subway. "For the first time you were going without the awareness of being sold," he explains after unlocking a bike on Calle Alcalá, next to Sol.

Vicente recounts this without joy, because he feels that the achievement may soon be ruined, given the progressive deterioration of BiciMAD. It is Tuesday, after 10 in the morning, and this is the third base in which he tries his luck, finally with success. In Desengaño street, on the other side of Gran Vía, there were no bicycles and in Plaza del Carmen, only one, but with a flat tire. "It's a disaster," he complains. He thinks that the service is "totally necessary", but that since the government changed in the Madrid City Council, it is getting worse and worse.

Complaints from users on social networks follow one another, and a morning of cycling tour through the city shows that they are not circumstantial tantrums. There are fewer bicycles, many are damaged and if you are not a militant of the two wheels it is logical to give up and opt for the subway or the bus. Borja Mosquera, 43, left one of the Retiro stations (the second; the first "was broken") to go to Vallecas. Upon arrival, an error occurred in the auxiliary application of the mobile, where the map is seen and the balance is recharged. He had to call the municipal telephone number 010 and have a good time before he could continue on the road. "For a year it has been failing. There are fewer and they are worse maintained," he laments.

María Hernández, 42, also had problems, who reaches Calle del Empecinado, between Delicias and Atocha. She has also been stubborn. "I have had to travel up to four stations," he says, back from work. In the last two months he has seen breakdowns of all kinds. "Electrical failures. Chestnuts and total loss", he lists.

The City Council Mobility delegate, Borja Carabante, attributed the deterioration to an increase in vandalism. Some of that there is. In Tetuán, on both sides of Bravo Murillo Street, there is only one of six stations operating on Tuesday at noon. "Yes, they steal a lot. I've seen it, they hit it, jump off the base and take it away," says Daniel Núñez, 33, after parking at the only station that is still operational. But that of the profiteers is not a new phenomenon and the workers of the Municipal Transport Company (EMT) point out a more relevant factor, in their opinion: the service has been expanded and the workforce has not only not increased, but has reduced.

According to data from the Plataforma Sindical EMT, a fierce central transport company, in February 2019 there were 172 bases and 2,029 bicycles, which are handled by 105 workers. After the elections and the access to the mayoralty of José Luis Martínez-Almeida, another 42 bases and 468 velocipedes were installed. In 2020, the local government of PP and Ciudadanos announced in style the premiere of BiciMAD Go, with another 452 bikes without a fixed base (10 times more expensive for users), to which was added a new extension of the classic service with 50 bases and 468 vehicles. The workforce, on the other hand, has gone from 105 to 100 workers in these two years.

This growth in infrastructure without an increase in staff has meant that where previously there were 11 people dedicated to moving bicycles from the most overloaded stations to the empty ones each work shift, there is now only one. The lone employee drives one of the trucks (before there were six, but half are damaged), loads the bikes, attends the mobile application to check where to fill in the gaps and is aware of the notifications from the base to go to collect the ones that are being worked out by the workshop colleagues. Can't cope.

The traffic jam is such that last Sunday there were 1,475 units in the Fuencarral warehouse of the EMT, where the damaged bicycles go, according to Antonio Blanco, a worker and member of the union. They are piled up, arranged according to a triage reminiscent of the toilet, between minor breakdowns (read a puncture), serious (a damaged battery) and very serious (the broken frame, for example). As the available template is dedicated almost exclusively to repair work, redeployment is neglected. Thus, the most isolated stations run out of holes and those who are in a hurry leave the bike unblocked. When this happens repeatedly, crooks appear. To alleviate this mismatch, the City Council subcontracted to a private company the collection of the bicycles furthest from the perimeter of the service during the summer months, at a rate of 70,000 euros, but it has not been possible to recover the usual rate.

Faced with the general discontent, the City Council announced that the locks of the bicycles without base will also be installed in the classic ones and has activated a contest to increase the workforce by 25 places. It was announced in April, but the process is still pending. Plataforma Sindical points out that this reinforcement will not be of much use because there are about 15 workers about to leave BiciMAD for other divisions of the EMT, and calculates that with less than 150 personnel the service will not recover normal operation.

In the operational base of Tetuán, María - it is not her name, but she is wary of questions - anchors the bicycle. He says that he does not get involved in politics, but that with Carmena BiciMAD "was super" and that the workers cannot be blamed. "I have coincided with the kids and they do what they can," he defends. A while before, about 13 kilometers from there, a mother walks with her young children through Pavones. It is Moratalaz, one of the last neighborhoods to which the service has reached. The younger girl, hanging by her mother's hand, looks at the base. There are 24 anchorages and seven bikes. "Where are the bikes, Mom? They took them!" She exclaims. The mother is unperturbed and continues walking.