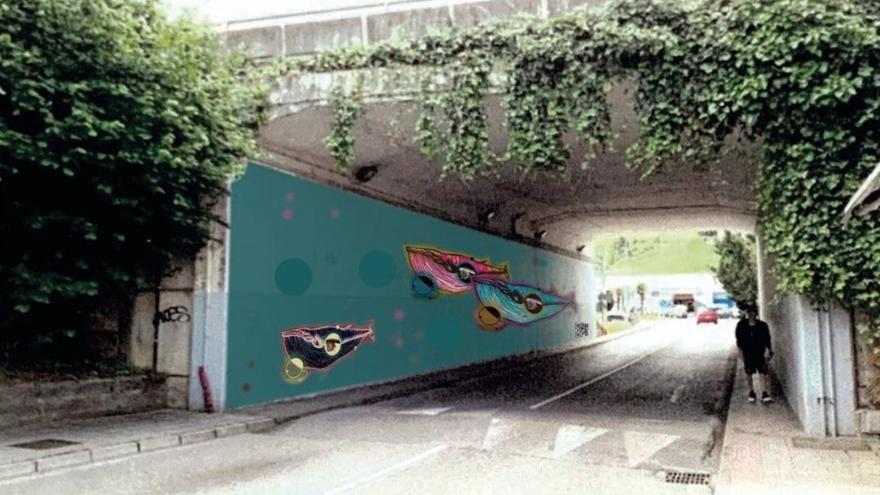 The Santa Cruz de Bezana City Council will decorate the urban center of the town of Bezana with a permanent exhibition of wall paintings related to marine biology and with which citizens will be able to interact through QR codes with their mobile phones.

The works, made by the Cantabrian artist Marina Casaos (Santander, 1984), with experience in scientific illustration and large-format murals, have already begun to be executed. Cephalopods, cetaceans, abyssal fish, coelenterates and seahorses, among other marine animals, will decorate five different settings in Bezana, the City Council reported in a press release.

With these works, it is intended to value the world that is hidden under water to make society aware of its importance and the respect it deserves. Through QR codes you can delve into marine life, its characteristics and curiosities “and bring the sea even closer to Santa Cruz de Bezana”.

The Councilor for Works and the Environment, Luis del Piñal, explained that the City Council seeks to improve the appearance of degraded areas of the urban center of the town, while using walls and walls as elements of scientific and environmental dissemination.

For his part, the mayor, Alberto García Onandía, highlighted the municipality’s “close link” with the sea and its unique coastline, which is part of the Costa Quebrada Geological Park. “For this reason, it seemed to us that the work of Marina Casaos was perfect to try to convey to our neighbors the importance of knowing and protecting the marine environment.”

“And what better way to do it than to occupy those spaces in our town, which are usually damaged by graffiti, graffiti and dirt, and turn them into open-air spaces for scientific dissemination that can also be used by schools as a new educational activity, through outings and visits to these interactive murals, “he said.

The Santa Cruz de Bezana City Council is carrying out a new graffiti cleaning campaign throughout the municipality and in recent months it has already filed the first financial sanctions against graffiti artists, with fines of up to 1,000 euros.

From the mayor’s office they have called for citizen responsibility, asking for “collaboration to denounce this type of vandalism, which has become a veritable plague, and which causes a serious deterioration of our public and private spaces.”