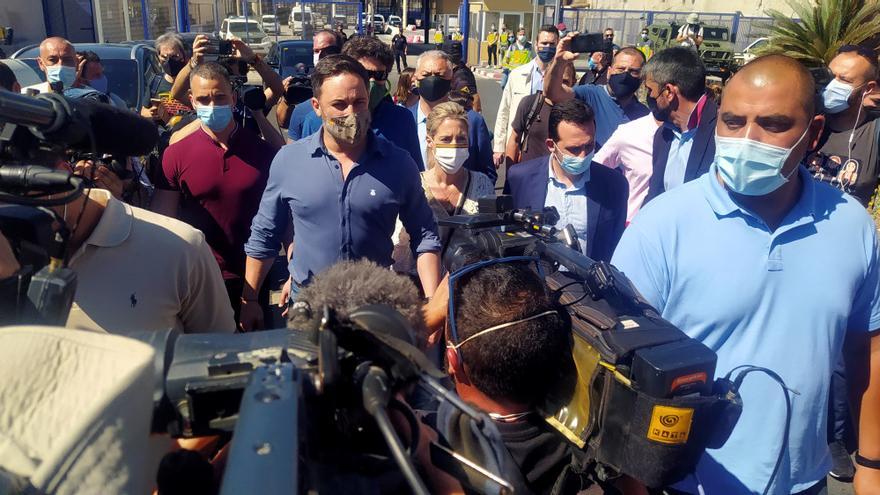 For decades, many discussions in Madrid about Ceuta and Melilla were accompanied by a warning that wanted to be gloomy. Someday, the Muslim population of both cities would surpass that of Spanish origin (that is, Catholic) and that would endanger the belonging of both to Spain. That catastrophic speech never came true, even though the premise has almost been fulfilled. 43% of the inhabitants of Ceuta are Muslim, according to a study by the Union of Islamic Communities of Spain. The percentage exceeds 50% in Melilla. The economic problems are real and the racist feelings have been around for a long time, but the coexistence has never been completely broken.

Vox has come to change that situation with the idea that it will be in their favor at the polls. Fueling the confrontation between the two communities is its main argument. The assault on the Ceuta border in May promoted by the Moroccan government has been an opportunity that Santiago Abascal’s party has not missed. Their leader ran to Ceuta to demand a strong hand and the militarization of the border. He later returned for a rally in the city, which was never held due to a judicial prohibition. His presence caused incidents when hundreds of people booed him outside the hotel where he was.

The Ceuta Assembly voted in favor of naming Abascal persona non grata in the city with the votes of the PSOE and two small local parties, MDyC and Caballas, in addition to the abstention of the PP, the first party with nine seats (the PSOE counts with two less and Vox with five less after the departure of another two to the mixed group). The Vox spokesman in the Assembly had previously complied with the order of his bosses to maximize tension in plenary sessions. A debate on a roundabout was enough for the regional leader of the extreme right to denounce the president, Juan Vivas, of the PP, for not calling an extraordinary plenary session dedicated to the events on the border, and insulting Fatima Hamed, of the MDyC party, calling it “fundamentalist” and serving the interests of Morocco.

Vox intends to define the Muslim parties and their voters as “fifth columnists”, as if Morocco were about to invade Ceuta and the internal enemy had to be dealt with. However, its ultimate objective is to dismiss Vivas and the PP as soft in the face of this supposed threat to provoke such resentment between communities that the voters of the PP end up in the hands of Abascal. In the regional elections of May 2019, the PP surpassed Vox by 3,000 votes and almost nine points. In the generals of that year, six months later, the tables were turned and the extreme right won the seat of Ceuta. Vox got 4,300 votes from the PP.

The extreme right has a very clear strategy: “Vox has been questioning Spanishness for two years on our part only on the basis of religion, clothing, the area where you live, “said the sociologist from Ceuta Enrique Ávila in May.” They have been sowing the seeds of confrontation between ‘Moors and Christians’, as if of a crusade it was “.

Vivas is very aware of this intention and of the damage caused by polarization in the city, not only political, but also social and religious. Therefore, suspended plenary sessions when they became in an exchange of insults spurred on by Vox. “You are making the speech to Morocco and enormous damage to Spain,” Vivas told them in plenary session, which he had to suspend after only half an hour. The Minister of the Environment, of the PP, was more expeditious. He called “scoundrel” and “fascist” to the Vox spokesperson.

The president of Ceuta explained on Monday in an interview at COPE the reasons for making Abascal’s disapproval possible with his abstention. He was clever in denying that they are trying to isolate Vox, among other things because that party in Ceuta has managed to isolate itself. “Not to the sanitary cords, but not to those established by Vox to set fire to Ceuta,” he said. Vivas does not forget Abascal’s visit on May 24, when he went to set fire to an unprecedented situation such as the arrival of 12,000 Moroccans and sub-Saharan Africans. At the time when the Ceuta government needed help from the central government and other parties, Abascal chose to lend a hand around his neck.

In the Popular Party, they should be aware of the very delicate situation that their colleagues live in that city. But the PP in Madrid has its own interests, which go through maintaining an extremely courteous relationship with Abascal’s party. It is not the first time that PP leaders in other autonomous communities have been disparaged for not being pure enough. Hence, his Madrid councilor, Andrea Levy, called the declaration of persona non grata a “despicable tool of the left”, which is nothing more than a symbolic censorship with zero effects. Cayetana Álvarez de Toledo – fought with Casado, but spiritual reserve of the Madrid PP – called the censorship “moral incongruity and strategic nonsense.” The deputy likes to give moral lessons to her own party.

Levy was outraged by the vote of Ceuta against Abascal, being against this type of initiative for a matter of principle and “because we have suffered it in a totalitarian way.” As if the PP had not resorted to it against his adversaries on numerous occasions. The PP of Zaragoza proposed it, for example, against the actor Willy Toledo for his comments on the Virgen del Pilar. If the most sacred calluses step on you, then the censorship is less totalitarian.

Vox has responded with the announcement that it cuts relations with the PP. You will not negotiate more budgets or laws with them in parliaments and city councils. It is a notice that they launch once every six months and that they never finish fulfilling. In the Madrid Assembly, they have already made it clear that they accept the role of doormats for the PP by allowing the approval of the law that gives control of Telemadrid to Isabel Díaz Ayuso.

Juan Vivas will not receive much support from the national leadership of his party in his attempt to stop the plans with which Vox wants to dynamite coexistence in the city. He will continue to demand that no one show up with a torch in Ceuta, but in his party there are some who believe that a good torch at the right time is an unbeatable tool.