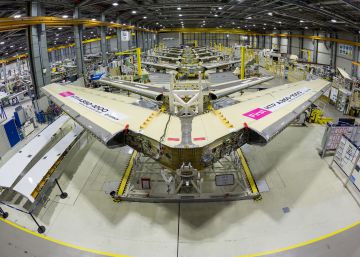 One of the largest Airbus facilities in Spain, the Getafe plant (Madrid), he was simulating for at least a year, before the rest of the group, that was fulfilling a workload on the A350 model that ended up subcontracting. It was between 2016 and 2017, jumping the alarms in September of that last year, when he was going to be promoted who was indicated by the company as responsible for the deception: the head of the A350 Component Delivery Team, who was also the director of Compliance of the Madrid factory.

The manager was 15 years old at the time and was going to become deputy director of Operations, but ended with a disciplinary dismissal after an internal investigation. Now him Superior Court of Justice of Madrid He has endorsed the inadmissibility of his expulsion, which had already been sentenced by the 11th Madrid Social Court, due to a matter of time limits in the execution of the disciplinary measure since the serious offense was detected.

But apart from the labor dispute between Airbus and its employee, the sentence has emerged the problem you had to manage Airbus Spain in its relationship with the Hamburg factory (Germany), where the aircraft tails manufactured in Getafe are directed to join other parts of the rear fuselage, finally going to Toulouse (France) for the final assembly of the aircraft.

The fired supervised the manufacturing and delivery process “In time, quality and cost” of sections 19 of the A350 aircraft, “being also responsible for the work to be carried out later in Hamburg, depending hierarchically, on the Plant Manager [de Getafe]”, Can be read in the sentence.

The text abounds that its added responsibility for the Compliance program (ethics and compliance) resulted in monitoring that business practices “were in compliance with applicable laws, regulations and ethical principles”. In fact, this boss was who received internal complaints about any irregular practice that occurs in the workplace.

It was at the time of being appointed to the position of Deputy Director of Operations of the factory when the intermediate position informed its director “about the existence of a local account in which a series of expenses not previously reported were imputed, ”states the sentence.

At indications of a violation of its manual of good practices and ethics, Airbus opened a research looking for mismatches “Between the hours declared for the work that was pending and the really pending, so that the former could be much less than the workload that really remained to be executed at the time the part was delivered”.

The internal investigations, as Airbus defended behind closed doors, showed “irregularities in the financial and operational reports” that led, as of March 2018, to audits and forensic investigations to clarify the scope of the internal fraud. The report was ready in September of that 2018, with the testimonies of different managers.

In addition to the alleged makeup in the hours pending work, the investigation collected testimonies about industrial problems in the process of assembling A350 components entrusted to Airbus Getafe, such as “the lack of space and automation difficulties, which were an obstacle for it to achieve its operational and financial objectives”.

The report also reveals a “Remarkable pressure to deliver on time”, which motivated the components of section 19 “to be transferred to Hamburg with a significant part of pending work that was completed by the subcontractor Assistance Aeronautique & Aérospatiale (AAA)” Faced with this cocktail of problems of factory capacity and high commercial pressure, it is stated that Getafe “began to declare significantly lower figures of the pending work in the delivery reports to Hamburg, closing multiple open work orders, and consolidating them into one single work order, creating the false feeling that Getafe’s written delivery commitments to Hamburg had been met. ”

The documentation analyzed “showed aircraft with around 50 hours of work (OSW) pending, when in fact they had between 250 and 300 hours or more of pending work, 20% of the total of 1,600 hours of the Section 19 work package” . The work to be done corresponded mostly to “the sealant application process”.

The interviewees in the internal audit spoke of the existence of a “Pact between knights” between the CDT A350 Assembly team in Getafe and the Hamburg office, “consisting in the non-inclusion of the sealant application in the OSW Report”. A task that was subsequently performed by the aforementioned AAA subcontractor already in the German factory.

“Gentlemen’s Agreement”. The way of transmitting work orders from Getafe to Hamburg, which managers of the Madrid plant framed in a “gentlemen’s agreement”, caused 26 sealant work orders to be transferred in a single order. In this way, the pending work was hidden, “also preventing the follow-up or monitoring of the work performed, pending work, manufacturing and delivery times, expenses generated, budgeted hours and budget compliance,” the audit maintained. powered by Airbus.

Maladjustment. In one of the cases provided as evidence, in May 2017, less than 15 hours of pending work were reported from Getafe, having subsequently verified by the company that “they had to be carried out by the Hamburg remote team and by the external company AAA , more than 300 hours, to finish the really pending work ”.

Impact. Airbus’ audit concluded that accounting for less pending work and fewer related costs caused the convergence performance of A350 Section 19 costs to be higher than actual. As a second derivative, “some assumptions used to prepare Getafe’s operating plan and forecasts were incorrect.”