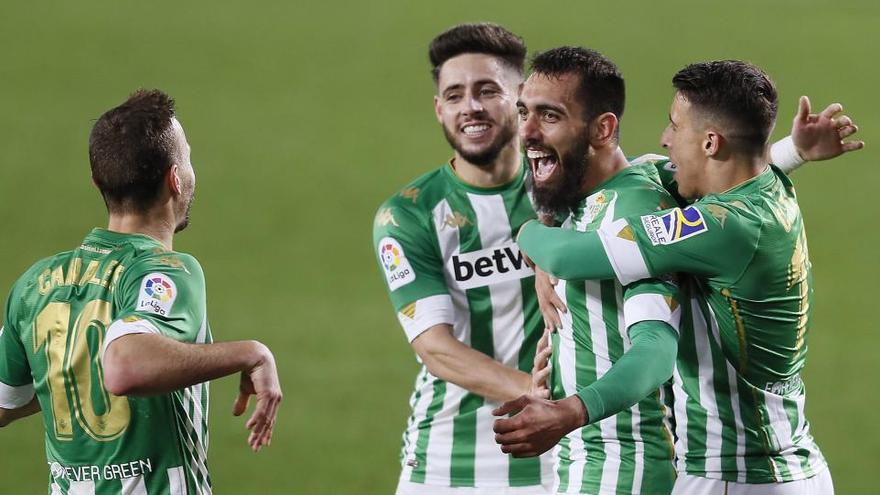 The front Borja Iglesias, which was already fundamental with two goals in the pass of the Betis to the quarterfinals of the Cup against Real Sociedad, the streak continues against the rival goal and with his goal this Monday (1-0) brings the green-and-white formation closer to European positions, while Osasuna, who was very active in Villamarín, he forgave on his clear occasions and this cost him defeat.

The béticos were at the mercy of the visiting team in many minutes of the first half and also at the start of the second, but the Navarrese were not able to translate that into a goal and the locals improved with the changes and took the three points with a good goal from a recovered Borja Iglesias.

The team led by Chilean Manuel Pellegrini had a good opportunity to get closer to the Europa League zone after this weekend teams that are above such as Villarreal and Real Sociedad shared points between them (1-1) and that Granada will not pass the draw at home against Celta (0-0).

A triumph gave him the option to unseat the Granada formation from the seventh place and for this the verdiblanco team came out against Osasuna with many casualties but that in the previous day had beaten Granada at home but then suffered disappointment being eliminated in the Cup against Almería.

Those of Jagoba Arrasate are fully immersed in the fight to get away from the relegation zone and the mission was to at least score at Villamarín while waiting to receive Eibar next Sunday, and thus the Argentine Jonathan Calleri soon gave the first scare to the locals when taking advantage of an indecision in the rear that the goalkeeper Joel Robles corrected very well in his exit.

Betis did not take long to respond and a header from striker Loren Morón, this Monday again a starter, ended with the ball repelled by the strain of a post and that later the central Víctor Ruiz struck a goal but offside.

The first quarter of an hour had not been fulfilled and the two teams had already warned with danger before the goals in a game that began with a strong rhythm and with the desire of both not to be subjected in the center of the field.

It was difficult for Betis to overcome the good tactical device of the Navarrese formation but also saw how Osasuna went quickly before the vicinity of Joel Robles, who after half an hour again had to intervene correctly before a new shot from Calleri.

From then until the break, the situation did not change much, with an exchange of advances although without precision to unbalance a score that did not move in the first half and that in the second began with the entry into Betis of the Brazilian central defender Sidnei Rechel instead of Víctor Ruiz, who had suffered a severe blow to the head.

As in the first period, the Pamplona team enjoyed a very clear opportunity, but Rubén García, alone against Joel Robles, headed high, and shortly after Calleri had it and again the goal of the verdiblancos avoided the 0-1.

There were two great scares for Pellegrini’s men against a rival who had already made more than enough merits to score, which made the Sevillians react and also the Chilean coach, who soon brought forward Borja Iglesias onto the field, instead of Loren , and the Portuguese William Carvalho replacing Joaquín to reinforce the center of the field.

The locals, already also with Cristian Tello on the grass, began to take the initiative and in minute 74 Álex Moreno was close to achieving 1-0, but Sergio Herrera avoided it on the same goal line, as with another stop before Tello’s own shot.

All this was the prelude to the goal of Borja Iglesias, who defined very well before the departure of Sergio Herrera After a great deep pass from Tello, the Galician forward maintains the streak that started in the previous match, in the Cup against Real Sociedad, and gives Betis three important points to maintain the streak of good results.

Incidents: Match that closed the twenty-first day of LaLiga Santander played at the Benito Villamarín stadium. No public due to the health protocol for the covid-19 pandemic. A minute’s silence was observed for the recent death of Englishman John Henry Mortimore, Betis coach in the 1987-88 season.