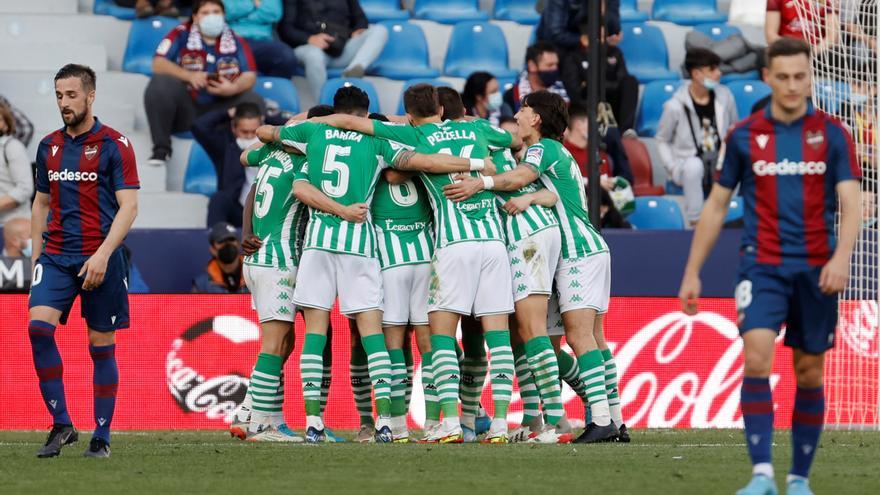 The Betis did not forgive (2-4) an almost evicted Levante in a match that he resolved with three goals in the first half and in which he showed his good playing time and goalscoring ability without giving the Valencian team a chance not even when the locals shortened the difference to 2-3 at the beginning of the restart.

Betis was superior and, above all, very effective in the first half, against a Levante team that could not reply, they failed to score several times and only did so shortly before the break when they were already losing 0-3.

After the break 1-3, it soon became 2-3, but immediately a free kick from Fekir made it 2-4after which the Sevillian team tried to control the ball and slow down the game.

The match started without a clear dominatoralthough in the game of the local team there was some haste in their actions against a well-placed rival who was also looking for the rival area.

A spurt by Nabil Fekir almost from midfield culminated with a shot from outside the area and his hard shot touched Miramón's back to dislodge goalkeeper Dani Cárdenaswho could not avoid the goal that opened the scoring.

After the goal, Levante tried to press a little higher, but it was difficult for them to steal the ball against a solid Betis that only saw their goal compromised in the first 25 minutes in a free kick by José Luis Morales that Rui Silva sent to a corner.

But Alessio Lisci's team once again displayed their defensive weakness and after 28 minutes Manuel Pellegrini's team scored again to put land in the middle of the scoreboard after a header from Pezzella that hit the post, but Edgar took advantage of the rebound to score with hardly any opposition.

Betis took control of the match against a very nervous Levante in defense and that he was not able to take advantage of any of his approaches. In addition, the Valencian team saw with the Portuguese Rubén Vezo he had to leave the field injured.

Even if the Betis team struck again with a third goal four minutes before the break mediated by William Carvalho, on this occasion the local team did respond with a goal in the following action through Dani Gómez.

The start of the second half was exciting. Yes Dani Gómez saw the door in the first minute of this period to further reduce the rival advantage, the one who responded immediately now was Fekir in 48 with the fourth so much for yours.

After the brilliant start, the match entered a phase of exchange of blows and with arrivals of both teams to the opposite areas.

But Betis was the one that was closest to the fifth than Levante from the third with a series of approaches to the area in which Cárdenas intervened successfully to repel the shots from Rodri, Borja Iglesias and Fekir.

In addition, the outlook got even worse for Levante as Roberto Soldier was sent off in the 73rd minute when he had only been on the pitch for seven minutes.

In the final stretch of the game and with their numerical superiority, Betis dedicated themselves to controlling the game to consolidate a new victory as a visitor against Levante who in the last stages of the match tried to get closer on the scoreboard but without success.

Referee: Jaime Latre (Aragonese Committee). He showed a yellow card to local Cáceres and to visitors Pezzella and Bellerín. He expelled Levante Roberto Solado with a direct red card (m.73)

Incidents: Match of the 24th day of LaLiga Santander played at the Ciutat de València stadium before 16,103 spectators.