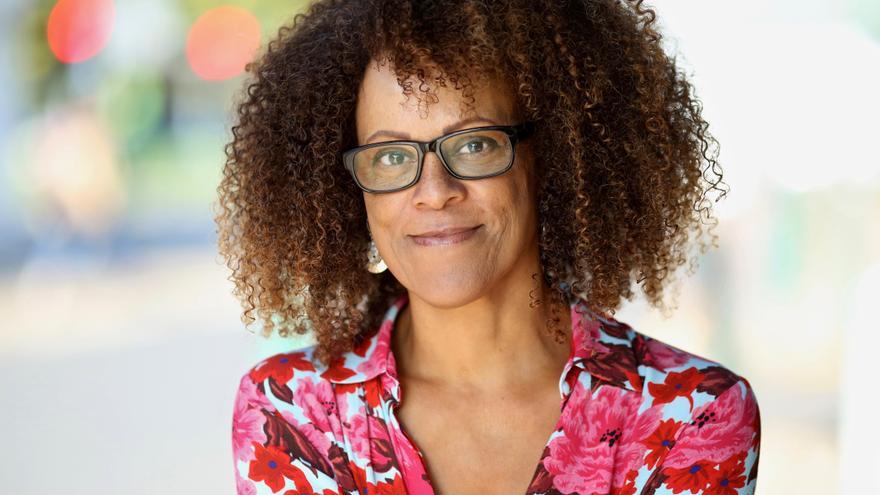 She is white, has long blonde hair, and lives in England with her three sisters, her father, and her mother. Her name is Doris and she is the heroine of the novel blonde roots by Bernardine Evaristo, which the AdN publishing house has just published in Spain, translated by Miguel Marqués Muñoz. A book about slavery that turns the tables and in which that English girl is not the empathetic protagonist who helps to free her black wet nurse from her – a classic plot – but rather she is the one they submit to. In the book by this Anglo-Nigerian writer, it is the Africans who travel to Europe to do business with human trafficking, although whites are not even considered as such. They are savages who cover their bodies with rags and have insane customs such as killing each other despite worshiping a God who tells them "You shall not kill."

The efforts of Omorenomwara, the name of Doris's slave, to escape were published in the United Kingdom in 2008, but until now no publisher had brought them to Spain. In fact, Evaristo was not well known outside of her country until in 2019 her success came overwhelmingly when she became the first black woman to win the Booker Prize with girl, woman, others (AdN, 2019). She shared the prize with Margaret Atwood because the jury could not decide between the two works, although her name appearing next to the Canadian author was not exactly a problem.

That award sparked an explosion of fame that landed her on Obama's favorite reading list and the presidency of her country's Royal Society of Literature, the first black person to hold that position in the 200-year history of the society. institution. But she is not exactly a new author and this is not the first award she receives either, although it is the most important. "The last two years have been incredible, because with the Booker everything changed. But I had been in the sector for a long time, success has come to me at 60 years old," she declares. She does not believe that fame is going to change her day-to-day reality too much, but she is clear that she is going to take advantage of it. "I have a lot to say and I don't want to just be the winner of the award, the first black woman, the first black British person, and then disappear," she says.

blonde roots It was not badly received by critics when it was first published, recalls Evaristo, although he believes that today it would have been valued differently. "Our society has changed a lot in these last fourteen years in terms of black politics and culture. For example, during the bicentennial year of the abolition of slavery there were many actions to raise awareness about the issue. And although my book talks about the issue in a different way, I think it would have reached more readers," he says.

"I wanted to write about the transatlantic slave trade and I didn't know how to do it. I didn't want to write the same kind of stories that other people have done," he explains about the plot of the novel. "After thinking for a while, I came up with this magical idea of ​​turning history upside down and creating a world where Africans enslave Europeans. And I realized that no one had ever done it before," he says. . In the book, he not only subverts racial dynamics, but also plays with the reader with time jumps and references to the real world from his invented universe. Self-help books from the time when hoop skirts were all the rage, popular parties with Afrobeat music, or a town called Londolo.

"I have a lot of fun playing with language and ideas. By composing an alternate universe in the book but with references to today, I can connect who we are today with the history of the transatlantic slave trade. And with the origins of racism, how developed alongside the slave trade," says Evaristo, who had already used this parallel world tool with his 2001 book The Emperor's Babewhich takes place in Roman London nearly 2,000 years ago.

The British publishing industry – although it could be extrapolated to any field in a heteropatriarchal society – is largely supported by women, but those who make the decisions about what is published are usually white men of, at least, middle class. It is the perception that Evaristo has, who laughs while he points to it. "It's a lot of fun, to be honest. This has been a big problem for women writers, but although I don't have the statistics, it seems to me that right now women are getting a lot of attention. In the end, most of the readers are women and we are interested in reading books by women writers".

Of course, she considers that if she were not a woman and black, she would have had an easier time selling books, which is not the same as getting recognition. "Although my work has always been considered good, nobody was very interested in publishing a black woman or a black British woman," she reflects. "There is always tokenism [una representación superficial de grupos minoritarios], one or two people who become stars and that's enough for the industry. But he doesn't look at everyone else who's also doing interesting, even great work, who he doesn't give the same opportunities to."

Massive success has come to her now and she notes that, as with literature written by women, there is a growing interest in authors of color. In fact, many of the biggest literary accolades of 2021 went to african authors blacks, including the Nobel to Abdulrazak Gurnah. Evaristo points out that "a distinction must be made between African writers and black writers because not all black writers will identify themselves as African, especially if they have their roots in the Caribbean or even in the United States" but he does believe that this is "a Very interesting time for black writers."

The publishing industry's interest in themes or authors that can be labeled – feminism, racialized writers, women's literature, etc. – always has the danger of remaining a fleeting marketing strategy. She is very clear: "From my point of view, it is good that the industry is opening up to new points of view, but the question really is, are these books selling? Are they selling enough copies to make it financially viable? Yes. they are, then the trend will continue. Only when they are no longer financially successful will the industry move away again."

Her long career as a creator – she not only writes narrative but touches all genres, from poetry to radio soap operas – has been focused on fighting racism and in favor of the representation of non-white people in culture. Activism has been a constant in her life and she has been aware of how certain events, such as Black Live Matters or #Metoo, have redirected the course of history. Nowadays, she believes that many things have improved thanks to more access to information, but too much noise can be counterproductive.

"Years ago you got a filtered version of world events through the media, but now the information is everywhere. We know what is happening in Ukraine, that the right to abortion is being revoked in Poland and Texas or the struggle of the migrants to arrive in Europe," he says. "And I think most people emotionally shut down because there's so much to take in even though you empathize with people who are in those situations."

Currently, his loudspeaker is very powerful and he makes good use of it whenever he can, including on Twitter, a platform that he loves, although he admits that he uses it with some caution. "Now people listen to me and before they didn't. I could say something and maybe ten people would respond to me but now I can have thousands of comments." But even so, he maintains that "although now I hold positions like that of the Royal Society of Literature, inside I am still the radical person I have always been. A person who wants to fight for a better society for all of us. Specifically for black people or even more Specifically, for black women, and Twitter is a very good tool for that."