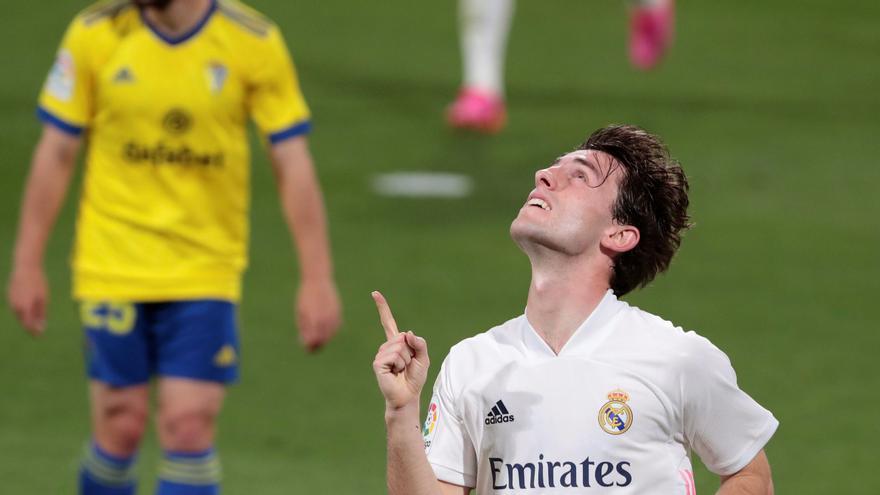 Karim Benzema’s inspiration brought the Real Madrid to the provisional leadership of LaLiga Santander, with a forceful first half with a double from the French striker and assistance to Álvaro Odriozola, to punish the speculation of the Cadiz, before reserving strength for what awaits you around the corner.

In full Super League earthquake, Real Madrid visited one of those fields where uneven matches are presented but which require dedication to win them. The plague of Madrid casualties cost a draw in the difficulty in Getafe that had no consequences in Carranza. Those of Zidane found no rival. Despite playing with a different identity, with Benzema they have plenty to return to the fight for the title.

The figure of the Frenchman was magnified before his thirty-fifth victim. A new team that was endorsed by a striker who has gone from being singled out for carrying the 9 on his back without responding as a scorer, to being the great benchmark.

A Real Madrid without Luka Modric or Toni Kroos change your identity irremediably. Two footballers who have marked the team’s football for so many years, absent the same day, with Zidane transferring the plague of defensive casualties to the core. His pulse did not tremble to give the alternative to the youth squad Antonio Blanco, firm in the midfield, and revive the defense of five. It worked out well.

Cádiz was a broken team that lasted half an hour. Without Álex Fernández and Perea, two key players. With his coach with a clear idea to achieve permanence. Cervera has no problem admitting that his team is ugly on defense. Before a big one he bet on two lines together, with Negredo as an island above. Fighting against everyone and still inventing a pass to Jairo for Courtois to justify his presence with a comfortable stop. The only one.

It was about time. With the weight of the game and the eternal white possession. Rodrygo appeared with speed, stopped with a grip on his shirt from Jairo that Mateu Lahoz did not interpret as a penalty. Three minutes later he went to the VAR review to see Iza stomp on Vinicius. After 25 days without a maximum penalty, Benzema did not forgive. In the same corner where he kicked the previous two. So tight to the stick that even though Ledesma guessed his intention, he did not deflect the ball.

The both it was a slab for a Cádiz that was a victim of its mistakes. From an avoidable penalty, with Vinicius knocked down after being run over into the area, he went on to a loss in ball exit, punished by a guest to the unexpected goal. Marcelo’s pressure on Iza. The left-handed pass with music by Benzema, present in everything, and the head of Odriozola. With more air to breathe feeling his back covered by the presence of three centrals.

Real Madrid felt the moment to sentence the match to save strength in the second act. With a crazy schedule, matches every three days, and battles to come you have to save your strength. And Benzema appeared again, at will, in the small area, to send a pass from Casemiro to the net.

There was little story to tell in the second half, with two teams thinking about what awaits them in the final stretch of the season. A final to continue in the elite of Cádiz against Valladolid that caused the mass changes of its coach. The ‘Choco’ Lozano appeared to forgive, with his head at the first post to a pass from Jairo, the goal of honor. Zidane was no less and rotated. He recovered Dani Carvajal for the cause two months later, made his debut for another ‘blackbird’, Miguel Gutiérrez and lamented the bad scoring dynamics of Mariano who forgave the fourth.

Incidents: match corresponding to the thirty-first day of LaLiga Santander, played at the Ramón de Carranza stadium. Cádiz jumped onto the pitch wearing a shirt that read: “Super League? Football belongs to everyone.”