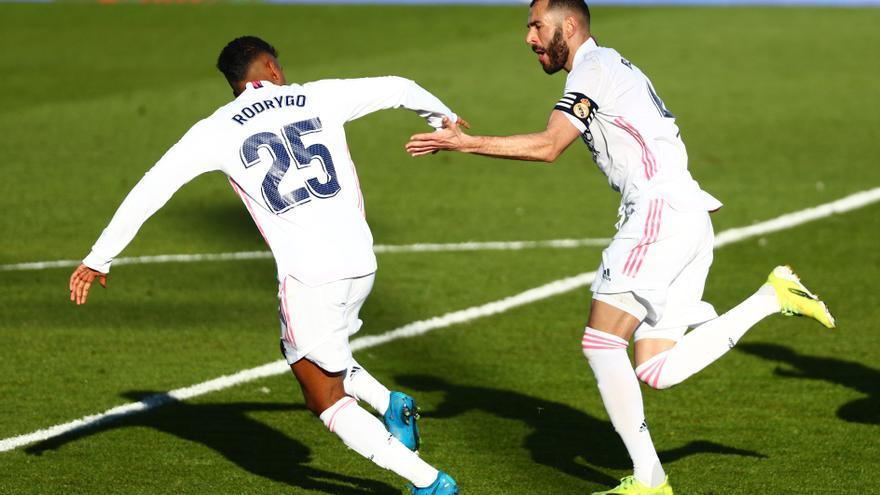 A genius of Karim Benzema in the added time it keeps the Real Madrid in the League, after a new exercise of suffering at the Di Stéfano against a rival from the lower zone, an Elche who caressed the glory but gave way in the final stretch to the Madrid push and a double from his only scorer.

The experiment of playing without the owners of the center of the field, Toni Kroos and Luka Modric, it did not go well for Zinedine Zidane. Thinking about the ‘Champions’ when you walk on the wire in the League, left a first part in the irrelevant. Without conveying the real needs. An error by Varane in the second brought a new resignation to the title fight and unleashed the heroic one. A team that when everything is lost, brings out the champion’s breed.

It’s not just a lack of punch what should concern Zidane. In games of less importance, his players reduce the intensity. The mistakes made against Cádiz or Alavés, with defeats at Di Stéfano that determine the options for the title, were not lessons learned. On a day when he had to look for goals and confidence, Real Madrid lacked football again.

Sergio Ramos returned, wrapped in a system with three centrals that left the bands to the physique of Lucas Vázquez and Mendy. The dominance of the ball fixed their offensive position and converted into wingers, they lost the surprise factor. It took Real Madrid 27 minutes to shoot for the first and last time in the first act at the goal defended by Edgar Badía. Isco, centered from the front. His attempts to go back to being who he was, leave frustration. Without the proper physical rhythm, forgiving the clearest he had for not specifying his shot.

Elche defended themselves comfortably against a team without rhythm that played on their feet. With only Vinicius throwing breaking unchecks in a predictable game. Without being able to run, Zidane’s team does not know how to display virtues. A good placement was enough for his rival. He only allowed a counterattack and that is when Madrid was closest to the goal, with Vinicius running into space and assisting Benzema, who forgave from the first left.

As he struggled to add imagination to the domain of the game and get off the script, a flash from the rival demands Courtois to be involved in the game. His firm mitt up avoided a scare when Morente took a cross that Marcone prolonged, before Lucas Boyé sorry for a bad control. The ad was released.

The Madrid traffic jam came due to his offensive lack of definition. When the intensity increased to find the flank where he could do damage, after a first shot from Benzema to the side of the net to refine his aim, a new referee complaint arrived. The Metropolitan derby was joined by a grab on Sergio Ramos de Marcone’s arm, That unbalanced him when he went to finish.

Real Madrid played with fire and Fran Escribá’s plan was close to becoming historic with Elche’s first triumph at Madrid’s home. Courtois saved the first with a great save, by Lucas Boyé finishing at pleasure, falling seconds before requesting a penalty from Ramos. And the second time, the Belgian goalkeeper could do nothing before Dani Calvo’s header after winning the game against Varane on a corner kick.

With everything lost, Real Madrid only had anger and pride. Zidane had to turn to Modric and Kroos, who took command. Rodrygo put the clarity that was missing in the last meters. The Madrid push caused Elche to step back. The harassment from set pieces ended up leaving the tie after a short corner, a cross from Modric and a header from Benzema.

There were 17 minutes to go and a point was of no use to Real Madrid in their fight. Casemiro was in all of them, Heading the crossbar, with power caressing the squad with a shot from the front. Escribá feared for the comeback and put a line of five behind. He couldn’t stand the push until the last second. Badía took Nacho’s shot but could do nothing before the genius of Benzema. Wall with Rodrygo and a left-footed shot adjusted to the post that prevents a new resignation from the League before taking on Atalanta.

Incidents: match corresponding to the twenty-seventh day of LaLiga Santander, played at the Alfredo Di Stéfano stadium behind closed doors.