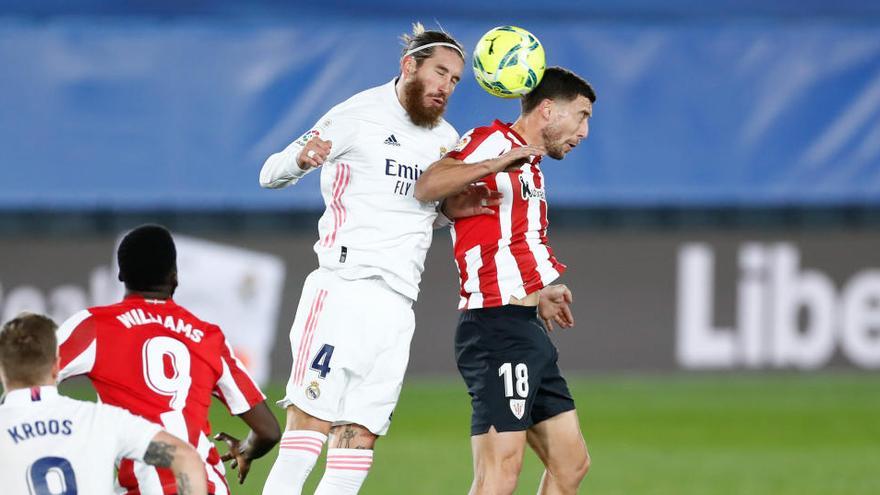 He Real Madrid lengthened his fantastic week with a win in front of Athletic (2-1) marked by the almost absolute protagonism of Toni Kroos, who masterfully guided his team to a victory marked by expulsion of Raúl García and the double of Karim Benzema.

Definitely, the best version of the German midfielder is back. His last exhibitions as a key light in the white resurrection had continuity against Athletic, which suffered the impulse of a team that has been reborn after signing its fourth consecutive win (Seville, Borussia Mönchengladbach, Atlético de Madrid and Athletic).

Kroos was the metronome and the plunger Real Madrid, benefited by the irresponsibility of Raúl García, the other key element in a story that could have been another if he had not almost expelled himself with a pair of yellow for two very clear stomps on the German half.

The experienced Athletic player, who asked for a place in the eleven after three days away, he left his team with one less man when the duel looked bad for Zinedine Zidane’s men. Gaizka Garitano, audacious, proposed an asphyxiating pressure very high and in just a quarter of an hour a lot happened.

Real Madrid, with trouble getting the ball, received two scares that could have changed the future of the crash. In both, two losses by Lucas Vázquez in the center of the field caused a clear header from Óscar De Marcos that went out of the goal of Thibaut Courtois and a shot from Iñaki Williams that did not connect with the Belgian’s goal.

It went from the possible goal of Williams and even a penalty that Jesús Gil Manzano could whistle for a push from Dani Carvajal to the expulsion of Raúl García on the next play. The sky opened up to Real Madrid after suffering in the first section.

With the only change in the eleven of the Uruguayan Fede Valverde for the suspended Casemiro, the other ten who brilliantly defeated Atlético last day had to roll up their sleeves to go ahead on the scoreboard before the break.

Only Kroos provided the fluidity and speed in the transitions to break Athletic, who lowered his line twenty meters to form a spider web that was difficult to break. Patience was lacking to take advantage of the spaces and sometimes only mid-range attempts seemed to serve to test Unai Simón.

Valverde and Kroos himself tried it, who like the Uruguayan sent a shot outside the Athletic goal and marked territory for what would come later. Just above the horn, when the 0-0 seemed the result of the break, he appeared to hit a far and millimeter blow with which he ended the resistance of the Basque team.

It was the culmination of an almost perfect first part: one goal, 53 completed passes out of 55 attempts, 100 percent win, six recoveries, and one expulsion. The road seemed open for the glory of the German and that of his companions.

However, Real Madrid this season seems determined to make things difficult. In the second part he went out to the field excessively conformist and Athletic surprised with a counter that ended with Ander Capa after combining with De Marcos.

1-1 and back again. Zidane took Isco Alarcón and Marco Asensio out to the field to seek imagination within the red-and-white wall, which still had the strength to let some of his soldiers out to scare his rival in dangerous counterattacks.

However, the white team held those attempts well And, although time passed without occasions, the first time he resolved a situation that was beginning to get ugly with a connection between Dani Carvajal and Karim Benzema that ended with the ball inside Athletic’s goal after a good header from the French forward.

It was enough. Benzema’s blow was definitive despite the fact that Garitano’s team still had the courage to step forward and upset Real Madrid in some moments. Curiously, Zidane’s team became a counter puncher and Athletic a stalker.

Vesga could get the heroism of the tie, but Courtois pulled out a miraculous hand and on the next play Benzema achieved the white victory with the third goal that sentenced Athletic. The 3-1 did not move from the Alfredo Di Stéfano stadium and Real Madrid took another step to stay in the fight for the League.

Incidents: match corresponding to the fourteenth day of The league Santander played behind closed doors at the Alfredo Di Stéfano stadium.

Osasuna lowers the smoke to Villarreal

Lucas Vázquez suffers a ligament sprain in his left knee