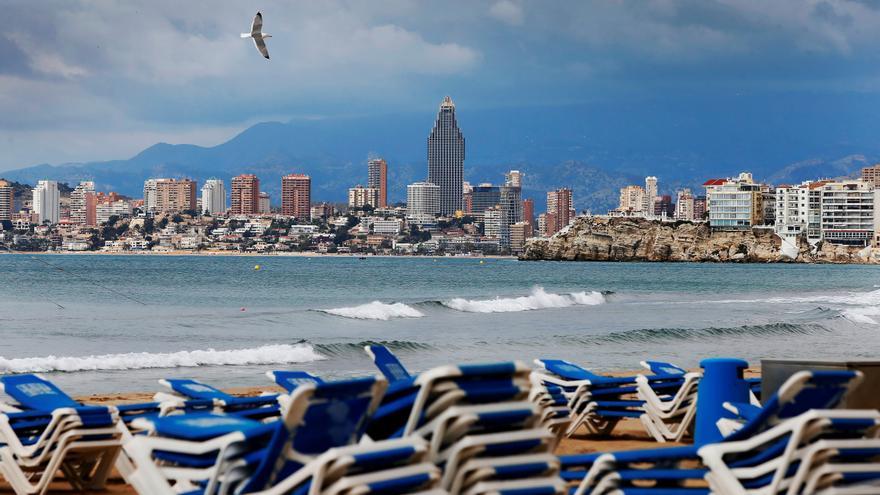 An emporium for travelers on the shores of the Mediterranean, a kind of Manhattan on the desert coast of Alicante that ranks as the fourth European city in tourist places, a city that has some 70,000 inhabitants in winter and nearly 400,000 in summer, a holiday destination where peaceful Spanish retirees meet together with hooligans Britons passing by Russian mobsters in a swarm of skyscrapers. All this and much more is benidorma symbol of development tourism that has gone from the tacky to the kitsch and that now returns to be rediscovered in novels and films.

The writer and filmmaker Esther García Llovet (Málaga, 1963) was amazed at Benidorm when, for the first time, she spent a few days there in 2019 to do a report. As a result of that fascination, she emerged spanish beauty (Anagrama), the novel that has just been published with the unique city in the background and with a corrupt police as the protagonist. "It seems to me", comments García Llovet in a chat with elDiario.es, "a fascinating city where all kinds of people live together, a place with many strata, as many as there are floors in its skyscrapers. In addition, those panoramic views are visually impressive, that skyline. Benidorm resembles a hologram when you go up to the upper floors and contemplate the immense sea at your feet and the mountains behind".

Despite these attractions, the author of spanish beauty recognizes that Spanish literature has made little use of these ingredients. "Many novelists", he points out, "have despised the fascinating Benidorm as literary material. Perhaps they have only noticed its tacky or seedy aspects and have thought that it was uneducated and elitist". Be that as it may, the truth is that apart from a few brilliant exceptions such as Rafael Chirbes, who set highly praised novels on the Valencian coast such as Crematorium or On the shorethe area and its themes have motivated the writers rather little.

García Llovet is totally convinced that the Spanish coast, urbanistically destroyed and massacred by speculation, offers very interesting possibilities for literature. In fact, she has announced that spanish beauty It will be the first story of a trilogy set on the Mediterranean coast that will have a next season in El Saler in Valencia and a third in Ibiza or in Murcia's Manga. In the same way that the author has broken those clichés about Benidorm, she has also been original by presenting Michela as the protagonist, a corrupt agent of the National Police, who is dedicated to dealing more out of nonconformity than out of ambition for money. "It's true," she comments, "that female characters in novels who are corrupt are rare, but women fall into this type of crime just like men. I have captured in Michela a cool and tough young woman, half British and half Spanish , who arms himself with many shells to protect himself".

Structured in short chapters, in the style of cinematographic sequences, with a high rhythm and very believable dialogues in diverse characters, spanish beauty aspires to be brought to the screen and García Llovet does not hide it. "My style is very deliberate," she confesses, "and of course my dual status as a writer and screenwriter is also noticeable. I've seen a lot of movies and, without a doubt, I think of stories in terms of images and dialogues. In other words, I would love for this novel to be made into a movie".

In line with these opinions, it should be noted that Benidorm has been rediscovered again for the cinema from three recent films that have been shot in this city: It snows in Benidormby Isabel Coixet; the cover, from Secun de la Rosa; Y lovesby Julia de Paz. These feature films, with different styles and themes, take up a trend that Benidorm used as a set in the postwar period (Dawn of America1951) or as a stage in the sixties (A kiss in the harborwith Manolo Escobar) or as background argument in the nineties (golden eggs, by Bigas Luna with Javier Bardem as the protagonist). "I think", says Esther García Llovet, "that this new interest of some filmmakers in Benidorm shows that Spanish cinema manifests itself in a more agile, fresher and more versatile way than literature".

The return of the Benidorm song festival, an icon of development tourism in the sixties, now converted into Benidorm Fest, highlights this resurgence, this revival of a city that has gone from tacky to kitsch in recent years. In fact, the Benidorm Fest, which this Saturday, January 29 will choose the Spanish representative for Eurovision, after the reactivation of the festival by an agreement between the City Council, the Valencian Generalitat and RTVE. Created in 1959 at the time of Pedro Zaragoza, the mayor who traveled to El Pardo on a Vespa to ask the general and dictator Francisco Franco to allow bikinis in Benidorm to attract tourists, the festival made singers like Raphael and Julio famous. Churches. After a slow decline that event, which was inspired by the San Remo festival, disappeared in 2006. But the paradoxes of fate always become unpredictable and now groups of pop, rock, flamenco, urban music, indies and even Galician folk music compete for a place in Eurovision. Live to see in this cultural arc that began with They carry, by Raphael in 1962; or Life goes onby Julio Iglesias, in 1968. It is clear that renew or die could be the motto of Benidorm.

Jorge Fauró, a veteran journalist who lived and worked in Benidorm for 12 years as a delegate for the Alicante newspaper Informacion, has no hesitation in stating: "This tourist capital went from being the dream destination of vacations for the middle and working classes for decades to becoming a a cosmopolitan and multicultural city, always on the edge of good and bad fame, but that knows how to reinvent itself". In Fauró's opinion, the enormous diversity of its population or of its tourists makes Benidorm a very special place. "Here they meet," he explains, "visitors from all over Spain; a tangle of tourists from many countries, with a predominance of the British; foreign mafiosi who find it very easy to camouflage themselves among so many foreigners; Inserso pensioners... To such an extent it is incredible the mix that at one time ETA commandos coincided in Benidorm at the same time as Basque businessmen who were precisely fleeing from ETA terrorism. In a word, an ideal place to go unnoticed".

The current director of the Prensa Ibérica chain remembers the times when the Benidorm City Council charged for filming on its streets and beaches because the film work forced the closure of roads to traffic and municipal logistical support. He also points out that for some years he stopped shooting in that city despite the success of films like golden eggs, filmed in 1993. In any case, Jorge Fauró also recommends approaching Benidorm without the prejudice of thinking that there you will only find people in flip-flops walking along the promenade with an ice cream in hand. "Perhaps Benidorm", he comments, "has not been used more by cinema or literature because the middle and lower classes do not sell glamor. But I can assure you that the city and its diverse inhabitants offer an infinite range of themes."