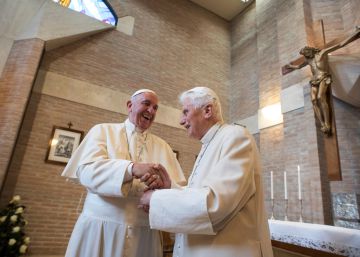 When the pope Benedict XVI He decided to step aside in 2013 and announced that he would do so in silence and would not interfere in the main issues of the Church. Things have changed somewhat in recent times. Joseph Ratzinger (92 years old) has just published a book with Cardinal Robert Sarah, one of the main ideological opponents of Francisco - although he has declared not to be his "enemy" -, where he defends celibacy and opposes the ordination of married men. A measure that was passed in the past Synod of the Amazon for certain places in the world and that the Pope could turn into law in the apostolic exhortation he is writing.

The book, whose content has been advanced by Le figaro, will be published on January 15 and is titled Des profondeurs de nos coeurs (From the depths of our hearts), as Cardinal Sarah himself announced on Twitter. "I think that celibacy" of priests "has great meaning" and is "indispensable for our journey to God to remain the basis of our life" writes Benedict XVI. The book is not just an analysis of "priesthood, celibacy and crisis of the church," as the subtitle says, and does not hide the post-synodal context in which it has been written. “In recent months, as the world has been resonating with the uproar created by a strange media synod that has prevailed over the royal synod, We have met, we have met. ”

Ratzinger and the cardinal of the Republic of Guinea and prefect of the Congregation for Divine Worship and the Discipline of the Sacraments - something like the head of the liturgy of the Pope - quote a phrase from St. Augustine to refer to the need to make public a controversial opinion that will generate controversy: “I can't shut up.” “We have met and exchanged our ideas and our concerns,” write Ratzinger and Sarah, who say they “do it with a spirit of love and unity in the Church.”

Cardinal Sarah has often been critical of Pope Francis in doctrinal matters, but above all he is the visible head chosen by the sector opposed to the current pontiff for an underground struggle that has lasted for years. In fact, both The League of Matteo Salvini how Vox in Spain -Santiago Abascal visited him in the Vatican- he has been summoned on occasion to refer to the traditional Church that, supposedly, Francisco would be betraying with his opening and in the defense of immigrants. Therefore it is even more striking that Benedict XVI has written with him a four-handed book that will be interpreted as a measure of pressure on Francisco.

Beyond the subject in question, the moment chosen is key to interpreting its scope. The book appears shortly before doing the apostolic exhortation that the Argentine pope prepares on the Synod of the Amazon. This document will include some proposals that were approved by the assembly of bishops and will be given official status. The most controversial and expected, precisely, is the response to the prelates' request to order married men to allow the faithful to access the sacraments to the most remote areas where there are no priests.

The measure, if approved definitively, would be very specific and would not officially open the door to celibacy, but critics with Francisco, among whom is also his former prefect for the Congregation of the Doctrine of the Faith, Gerhard Müller, consider that it would be the first step to "abolish celibacy." A position that allows Francisco's opponents to open a new war that, this time, as published by Le Figaro, would have the ideological support - and perhaps involuntary - of Pope Emeritus, Benedict XVI.

The book also reopens the debate about the limits and behavior that a pontiff emeritus must have and the consequences that unleash what he says or writes. In April 2019, Benedict XVI published an 18-page document in which he reflected on the Church and sexual abuse and re-ignited a debate about what his role should be since retirement.