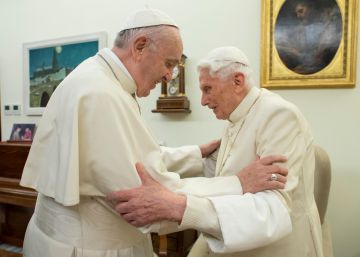 What Francisco least expected was that his predecessor Benedict XVI would join so desperately to the powerful enemies of the Argentine pope, more and more vociferous. When he resigned in 2013 to the throne of the so-called State of the Holy See, who was named Joseph Ratzinger as a civilian promised to be confined within the walls of the Vatican, with discretion, to pray and to complete books in his hands. He kept his word many years. In Argentine correspondence, Francisco visited him frequently in the afternoons of long conversations and many silences.

It is believed that Francisco’s order to break the secrecy that covered up countless sexual abuses of ecclesiastics about minors of both sexes, filled the patience of the pontiff emeritus, little accustomed to being contradicted since he exercised, for decades, as prefect of the Congregation for the Doctrine of Faith, which is what the sinister Inquisition is now called. Ending secrecy was precisely to repeal a circular signed by Ratzinger, which ordered all bishops to send cases of pedophilia to the Roman doctrinal congregation, without further consideration. Ratzinger’s idea then, and for many years, was that the scandals of ecclesiastical abuse, which he minimized, were due to a campaign of the anti-Catholic press. He insisted on it at the Catholic University of Murcia, in November 2002.

The truth is that Benedict XVI, now 93 years old, recently gave interviews, published articles, gave his opinion on climate change to mute the Synod on the Amazon and, most strikingly, came to say last April that the origin of the abuses Sexual must be sought in May 68 and how he was interpreted for him disastrous Vatican Council II. The assumption that Francisco is preparing to authorize the priestly ordination of married men, as the first step towards optional celibacy, has had to fill his patience. The truth is that, despite a subsequent, unconvincing justification, Pope Emeritus wrote and sent to Cardinal Sarah the texts that he gathers in the book that is now published, an amendment to all the orders and wishes of the current Pope. It is a clamorous interference in which for decades he punished hundreds of theologians for not submitting to the teaching of the “Vicar of Christ on Earth.” Already Pope, Ratzinger riveted that idea by publishing an “instruction” warning the theologians that they should also submit to the bishops (and not just the Pope).

Entering the merits of the matter, Ratzinger is poorly informed. Also err Sarah, born in Guinea Conakry in 1945 and forced to a greater discipline for being part of Francisco’s government since 2014 as prefect of the Congregation for Divine Worship and the Discipline of the Sacraments. It is not true that Francisco is going to end the compulsory celibacy (he has said that for the moment not: a “for the moment” in the Roman Church can last a hundred years, see the obligation of women to attend Mass with their heads and shoulders covered , or the menacing belief that the Earth was neither round nor revolved around the Sun). What the Pope proposes is to remedy that tens of millions of his faithful do not have access to Sunday Mass or the Eucharist (not going to Mass every Sunday was a very deadly sin until recently). The alarm sounded with clamor last October when it was revealed that 70% of the indigenous communities in the Amazon suffer from this ecclesial abandonment.

That for this it is necessary to order married men it seems to Francisco pecata minuta. There are already, in hundreds, in Spain, called by the bishops to attend to immigrant Catholics in Eastern Europe. They also exercise many of the Spanish married priests (about 6000), discreetly in parishes without an official priest, almost always with the consent, also discreetly, of the prelates. Ratzinger himself authorized in 2005 the ordination of a married man in the diocese of Tenerife, celebrated by the bishop, then Felipe Fernández, with a large media apparatus. It was the Spanish Episcopal Conference who invited Evans D. Gliwitzki and his wife Patricia, parents of two girls, born in Zimbabwe and pastor there of the Anglican Church, to come to be ordained to Tenerife. It had been authorized by the Congregation for the Doctrine of the Faith, presided over by Benedict XVI today.

Today the strong wind will be the protagonist in Galicia