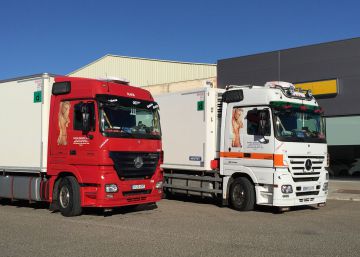 A naked woman, on her back, turning to the right with one arm raised, removing her blond hair from her face, which looks straight ahead as she smiles. The image is cut just below the buttocks and you can see a white league. That is the photo labeled on the side of the heads of the trucks of Benavent Transportes, a company from Alcázar de San Juan, in Ciudad Real, to which the Association of Users of Communication denounced in 2016. Now, a city court forces the company to remove those photographs "of clearly humiliating and humiliating content" and the sentence to pay the publication of the sentence in the written newspaper and on-line with more readers of the province.

The company argued that the label was for "aesthetic", "something normal and nothing suspicious of any vexatious pretension or bad taste, but on the contrary, constituting a simple exaltation of beauty." But the Court of Instruction and Trial Court No. 4 of Ciudad Real understood the contrary. "Objectively they do not exalt either the beauty or the woman, but parts of the body with a marked sexual content", reads the sentence." A derogatory image of posters announcing sexual contact pages or evocative of rancid road clubs ".

The ruling explains that several laws are violated. The General Advertising Law, which since 1988 considers illicit advertising that uses the image of women in a vexatious or discriminatory manner; the Law on Gender Violence, that speaks of the image when it is associated to "stereotyped behaviors that violate the foundations of our ordering, contributing to generate violence" -; and two articles of the Constitution, 10 on the dignity of the person and 14 on equality before the law without any discrimination.

The court argues that this is "an evident reification of the woman that must be eradicated, shown across the length and breadth of our roads as a shameful and ignominious trophy." In a sentence "pedagogical and uncommon for a first instance," as legal sources point out, there is talk of a stereotype that "unfortunately, even today, women continue to sell their bodies, as object women, as a piece of Meat with a purpose of marked sexual content It is convenient not to forget, as James Frey maintained, that when you eradicate or take away a human being's dignity you create a hole, a deep black hole full of desolation, humiliation, hatred, emptiness, grief, misfortune and loss, which becomes the worst hell. "

And he concludes: "If we want to fight for a real equality, to build a country advanced in universal values ​​and essential rights, we must begin by eradicating activities "like this.In recent years, justice has been incorporating more and more the gender perspective in all its instances, something that for a long time they have been demanding from jurists to feminist collectives. of the Supreme Court in the case of La Manada It has been the last of those steps. On June 21, the Supreme Court understood that there was a violation, changing the ruling of two previous juries, the Provincial Court of Pamplona and the Superior Court of Justice of Navarre, and also changing the legal vision of sexual violence Y the treatment of victims.