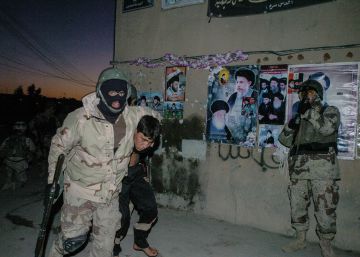 Attention Servicemember It gives its name to a corrosive and disturbing story, written and visual. It is Ben Brody's testimony about the intervention of American troops in Iraq and Afghanistan, wars that have taken the lives of more than 7,000 American soldiers (53,014 wounded) and hundreds of Iraqi and Afghan civilians. It is also an assertion of the attempts of the US Government to shape the narrative of a conflict, through the implementation of a visual doctrine and propaganda, and the reflection of the consequences left by the war in those who return alive

After 15 years photographing the war "gravity has stopped dragging me towards the earth," writes Brody. “He drags me quickly through the doors, pulls me towards defensible terrain, turns my body so I can see all the exits and the points to cover […] The second moon wakes me up and pulls me out of bed at night, leads me to the forest. ” In 2002, Brody was 22 years old. Photography student, he had broken up with his girl. He felt bored and wanted to photograph the war. Even being skeptical, he believed that the Iraq War would be a crucial moment for his generation, as Vietnam had been for his parents. Enlisting in the army as a combat photographer was the only way to participate in the impending invasion.

He wore a uniform and enjoyed the same permits and access as any soldier of the 3rd Infantry Division, many of them restricted to photojournalists. But soon the ambivalence between being an actor and an observer began to take shape. The first time he had to show his images was during a meal at a Rotary club near Fort Stewart in Georgia. It began with the description of his first night in Iraq when a soldier was killed under friendly fire on a dusty road. He also spoke about the Iraqi police, which they trained and armed, before showing the images of the attacks and night extrajudicial executions. "I wanted them to feel the murderous heat and the arbitrary death, and the incessant for no reason that accompanied my work," writes the photographer. However, nobody stopped eating during the talk. In the end they clapped a little.

There was an indoctrination that, although local, started from the Pentagon. "Photograph the war in a way that justifies its existence and exaggerates its achievements," says Brody. Thus he learned to distinguish which images would pass the screen and which not. Soon he was surprised by his self-censorship: he photographed the Sunnis, seized by the Iraqi police in a sectarian manner, as dangerous militiamen; hospital openings, even if they had no resources; I knew that I should avoid the obscenity of mutilated corpses; the soldiers must appear calm and stoic; it was necessary to dispense with any image that showed fatigue, panic, confusion, or madness. "There is a vicious circle in the imagery: the soldiers are observed in the same way that the military is reflected in the films, so they play that role, later this will be published in the media and will inspire more films," said the photographer. during an interview on the television show Greater Boston. One of his companions made him see "the empty and uncritical glorification of violence, as a confirmation of the stubborn belief in the cultural superiority of America." Hence, he will begin to turn in his head how to "visually communicate the war by confronting the false narratives that people build for themselves by observing the images."

One of his photographs shows Captain Morris talking on the radio, while helicopters fly over him. In the distance the figures of the rest of the soldiers blurred in the smoke of the battle are lost. It is a clear example of the perfect propaganda image. It has been used in advertisements of vaporizers, tactical radios and batteries, after being printed in several military publications since, like any material produced by the government, it belongs to the public domain. “It's a decorative wallpaper, it's patriotic, it's a war crime, it's misinformation. It inspires hope and dread, also the purchase of the most pointer tactical radio equipment. But when I see the image I only smell the anise and the cordita. I feel the eel writhing in my guts and I see the girl screaming in the house we finally entered. ” On another occasion, after five days of continuous combat, when showing his images the head of the division rejected them. They were "too negative." "Victory should be clean." The images were saved along with many others that now make up this book, which would gradually be treasured on a hard drive.

He returned to his home, in order to lead a quiet life, after a season he could not resist returning. Thus, in 2011 he left for Afghanistan built into the American army as a civil photojournalist. There he would have to face another type of censorship; the one imposed by the public affairs office, which also required positive coverage. This meant the signing of a series of conditions. “The most restrictive referred to the American casualties. The photographs of the wounded soldiers required a written permission from them, something normally impossible to obtain, ”says Brody. The philosophy that hides behind embedding a photojournalist to the army and allowing him to share risks and experiences with the soldiers is that “the coverage will lean towards the positive due to the bonds of affection created”. During those days, the photographer would try to avoid all kinds of impediments, sometimes opting to directly photograph the theatricality of the assembly as the most revealing of the strategies. Inside, the struggle between the indoctrinated side and that which made his sense drive him to photograph did not cease.

The book begins and ends with black and white images, those he took back to his home in Massachusetts, intimate images where the threat and fear seem to remain latent. "I also see the war in the gas pump, in the choices made by people who consider themselves peaceful, in our use of drugs, the war in our economic system, the war in our collective anxieties," he writes. The color is reserved for photographs taken in Iraq and Afghanistan; those published and censored. Making use of a design inspired by war manuals, interspersed images with illustrations of animated characters, as well as drawings, with advertising, with publications of military magazines, screenshots and other documents; Sometimes everything seems confusing, disorientation arises, there are no dates, no photo captions, no way to differentiate the different places. It leads us to a nonsense - the same that underlies the wars themselves - from which the dichotomies arise: two opposing sides, the real events against propaganda, life against death, reality against myth, common sense against to madness, humanity in the face of barbarism. All this as an amalgam to try to describe an indescribable experience: war.