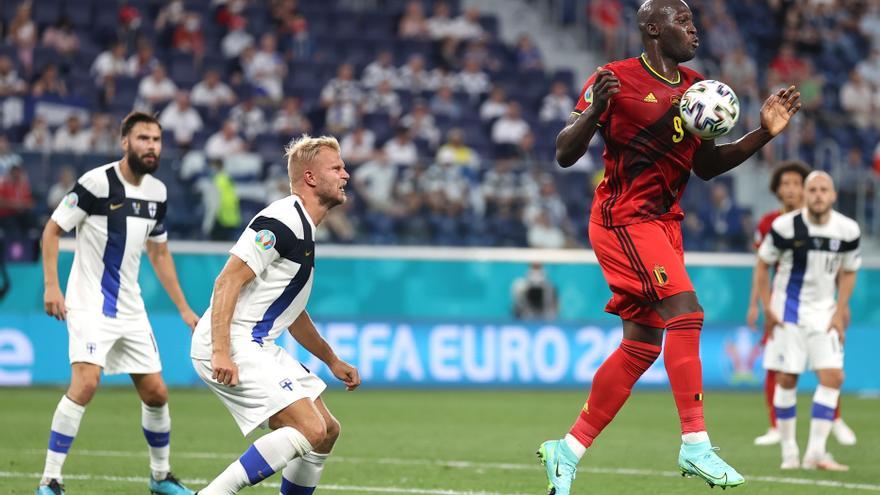 Belgium achieved this Monday the full of victories in the Eurocup before a heroic Finland (0-2), which withstood the siege of the 'red devils' for more than an hour.

After a first half without many ideas, it had to be the veteran Vermaelen who opened the can from set pieces. The lush Lukaku He put the finishing touch with another goal, which has already added three to his credit in the tournament. The Scandinavians who played their first tournament of nations dreamed for much of the match to qualify for the round of 16, but they were left with honey on their lips.

It happened to two other big favorites, France, against Hungary, and also to England against Scotland. Tie and thank you. Belgium was going the same way, but a corner in the absence of a quarter of an hour solved all his doubts in attack. The coach of the 'Red Devils', Roberto Martínez, led a small revolution in the team. He made eight changes in relation to the team that beat Denmark in the second game. Only Courtois, Denayer and Lukaku repeated.

Eden Hazard started for the first time since the return of the Champions League semi-finals with the Real Madrid, against Chelsea. The Madridista was looking forward to it from the opening whistle. He searched all the time for Lukaku, with whom he tried to make several walls. He even allowed himself a couple of high heels. The Inter Milan striker wanted to return the favor on one occasion, although he had everything going for him to shoot on target.

While, the finns played at home. Several thousand of his followers came to Saint Petersburg from the neighboring country and cheered on the 'royal owls' non-stop. Their players responded with a Numantine defense, with sporadic counterattacks. De Bruyne tried it, who also started his career, with short and long passes and forays into the area. Lukaku came to comb a pass to the back of the Manchester City midfielder's defense. Unlucky.

A lot of possession, but few ideas. Doku broke the monotony in a counterattack with a cut and shot, which the Finnish goalkeeper cleared with one hand. Hazard gave the scare when receiving a stomp from a Finnish defender on the brink of halftime, but everything seemed to be in a scare. Of course, it seemed a penalty. This is how the first part ended and the Scandinavians were so happy.

The Finns advanced lines after the break, but it was the Belgians who disturbed Hradecky. Hazard tried twice. In one, he shot wide, and in another, at the goalkeeper's hands. Courtois' mitts only touched the ball on a Kamara shot after a good team play. Hradecky then dressed as a hero again by clearing a free shot from the edge of the Madrid star's small area with one hand. Hazard was looking for his goal and, more importantly, the lost confidence after two years of ordeal.

It had to be a set piece for the 'red devils' to tear down the Finnish wall. At the exit of a corner, Vermaelen finished, the ball was spat out by the post, but it bounced off the goalkeeper and went over the goal line. Bad luck for Hradecky. Own goal (min.74). From there, the game was a give and take. The Finns made him want to, but Lukaku was not kidding. Winning the Eurocup and being the top scorer of the tournament are not incompatible. Hazard wanted to join the party with a move of his own. He faked several opponents on the edge of the area and shot at the opposite post. Slightly deviated. Good game for the madridista, but without a goal.

Belgium now awaits rival in the round of 16. Meanwhile, football has discovered another country, Finland, a worthy newcomer.

Incidents: Match corresponding to the third day of Group B played in the Krestovski state of Saint Petersburg.