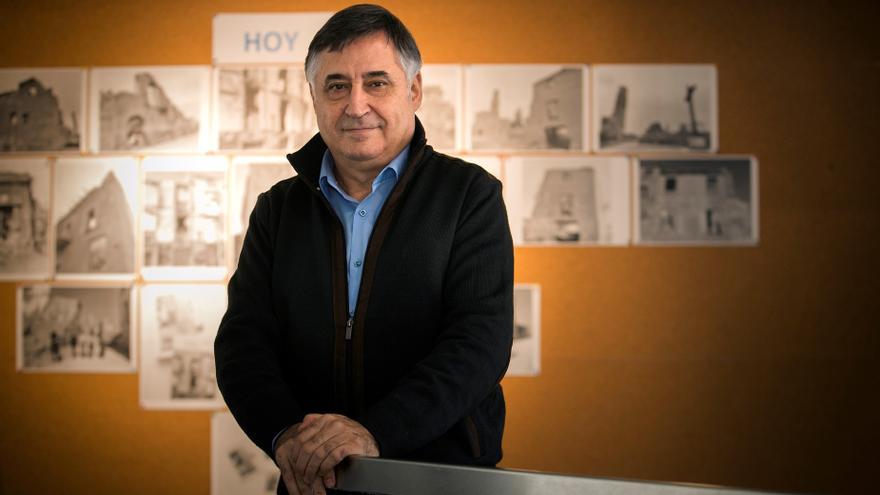 Zaragoza, Feb 17 (EFE) .- The photojournalist Gervasio Sánchez considers that the ruins of the Old Town of Belchite (Zaragoza), to which he dedicates his new book, “The eyes of war”, should be a scene of peace and a place where to negotiate the end of war conflicts.

At the presentation of the work this Wednesday in Zaragoza, Gervasio Sánchez (Córdoba, 1959) has evoked an image: the negotiating tables should be located inside the emblematic church destroyed in the Spanish civil war to remind negotiators that “imperfect peace it is much better than war, because war is always perfect, it always kills. ”

“The eyes of war”, edited by the Belchite City Council and the Goya Territory Association, is a book-object that synthesizes the exhibition, installation and intervention project through photographs in the ruins of the Old Town of Belchite, generating a dialogue between these two cities surrounded and ravaged by war at different times.

Inside the box that makes up this work there is a booklet that explains the project that was carried out in the spring of 2019, in which the images of the Balkan Wars, especially of the armed conflicts in Bosnia and Kosovo, merge with the remains that remain standing in this town, the scene of one of the bloodiest battles of the Spanish Civil War.

“Hopefully this type of exhibition will continue to be held in Belchite”, the correspondent has wished, who defends that “there are few Belchites in the world”, as a place that evokes any city destroyed by war and reminds new generations that something so it should not be repeated.

For the mayor of the municipality, Carmelo Pérez, these ruins represent “a place of memory and peace”, since their history is the history of the global world and “there is no war conflict different from the other”.

In addition to twelve postcards with photographs of what was the exhibition among the ruins, the book-object designed by the Aragonese National Design Award Isidro Ferrer contains a third element, the most peculiar, a bag with dirt collected in front of the Church of the Town Viejo, accompanied by a snapshot that places us at that exact point.

“We wanted to make something unique, not a normal book, to use. It was worth the effort and in dialogue with Isidro Ferrer we shaped the box,” commented the curator of the exhibition, Ricardo Calero.

The photographer from Zaragoza highlights “that value of the tactile at a time when it is practically impossible to touch” and the specialness of this book-object in which, as when collecting the earth, “everything is made by hand”.

Gervasio Sánchez has also been accompanied by the journalist Alfonso Armada, author of one of the texts in the book, in which he describes the man who was his partner for more than six years, first in the conflicts in the Balkans and, later, in Africa.

In this text he recalls that “the ruins of the town that Franco wanted to serve as a lesson” now serve as a reminder “of fright, of fratricide, of what a war, and more of a civil war, triggers.”

The Old Town merges with the images that Sánchez captured in Sarajevo, in the Bosnian war, to show “how the war bursts into daily life, turns houses into morgue, soccer fields into cemeteries, facades into displays of calibers, the pecking of metal turned into a thrown weapon, the plow into a bullet, the sickle into shrapnel, the hammer into an antipersonnel mine, the tools into an abyss. ”