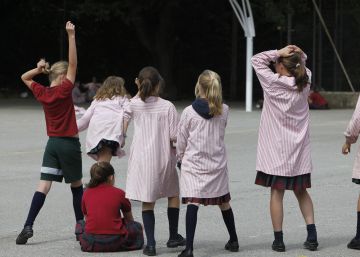 The criterion of school admission that awards points to a student for the fact that one of their parents has studied at the school is in decline in Spain. Five years ago it was applied in 11 communities and now it is only allowed in seven. The concerted school opposes the disappearance of the so-called former student or dynastic criterion that, according to experts, contributes to segregate students by social class, a land in which the Spanish education system fails, as the latest PISA Report has once again been revealed.

The evaluation program International students place Spain in the middle of the table in a classification of school segregation in which 40 countries are included, including 36 OECD members, based on the so-called isolation index, which measures the probability that a student has as partners to children of a socioeconomic extraction different from yours. A list that heads Norway, as a more balanced system, and closes Chile. On an autonomous scale, PISA places Cantabria, which does not allow points for former students, such as the least segregator, and Madrid, which is where this criterion has more weight, such as more. Other factors, some with more intensity, such as residential segregation, are influenced by the separation by social classes of the students, experts point out, however, that the dynastic criterion, used mainly by concerted centers, pushes in the wrong direction.

“It is a mechanism that promotes the social reproduction of educational inequalities, by facilitating the enjoyment of the children of those who were educated in a privileged educational context. If you want to promote equal opportunities and reduce school segregation, that criterion would have to be eliminated, ”says Jesús Rogero, Professor of Sociology at the Complutense University of Madrid. “It contributes above all to the children of the upper middle classes of society being together and not mixing with other social sectors of middle and lower classes, as well as with the children of immigrant children,” adds Manuel Rodríguez, professor of the same discipline at the University of Valencia.

In 2015, in addition to Madrid, Galicia, Castilla y León, La Rioja, the Basque Country, Navarra, Murcia, the Valencian Community, Catalonia, the Balearic Islands and the Canary Islands, they contemplated in their standards the criteria of a former student or, more commonly, left them up to of the centers the possibility of assigning one or more points autonomously in the admission process. And a good part of the schools were chosen.

Since then, the Valencian Community and Navarra (at the beginning of the last legislature) and Catalonia (in the admission process last year) suppressed it, while the Balearic Islands have eliminated it for the next registration. The border of the application of the criterion also draws a political map. All the communities that allow to apply it are governed by the PP, except for La Rioja and the Canary Islands (where the popular ones sent until May), and the Basque Country.

Opposition of the concerted

The Balearic Islands have introduced the change in their new admission decree. “We have great schooling pressure and abundant immigrant students. Our goal has been to guarantee equal opportunities and seek the greatest possible balance. And the criterion of giving a point for a former student went in the opposite direction, by favoring that certain students, because they were children of who they were, had more options to access a certain center, ”says Antonio Morante, general director of Educational Planning of the Balearic Government. The measure has been appealed to the courts by two employers of concerted centers.

The suppression of the dynastic criterion was also adopted in Valencia with the opposition of most of the concerted teaching. “We thought it was wrong because it was a way for former students to somehow return to their school through their children,” says Vicenta Rodríguez, secretary of Catholic Schools in this community. “The consequence has been that many children of former students have been left out. There have been cases, in renowned schools, such as El Pilar de Valencia, in which the grandfather and father had studied in the center and now the grandson has not been able to enter. It was a point that helped to retain the former students and strengthen the ties of belonging to the school, and removing it has meant underestimating those affections, ”laments Rodriguez.

The majority associations of mothers and fathers of students have, on the contrary, supported the change where it has occurred. “The elimination of the criterion was good news, although it was late,” says Lidón Gasull, director of the Ampas Fapac federation of Catalonia. “The admission process must ensure that the students of the schools are not homogeneous in the origin and socioeconomic level of the students, because that way the school is not a reflection of society.”

“International comparative studies show that where the centers have some level of autonomy to manage student admission there is more segregation than where the assessment is centralized and common criteria apply, ”says Miquel Àngel Alegre, project manager at the Fundació Jaume Bofill. “Regardless of the criteria they choose, the centers end up seeking to select a student body that reports greater social prestige or a more favorable social composition, in what is called adverse selection,” he adds.

The unification of the admission process in bodies outside the schools themselves is one of the 37 measures proposed by a team of researchers led by the sociology professor Manuel Rodríguez, at the request of the Valencia City Council, which have been included in the document Plan against the School segregation in Valencia presented in December.

The study considers insufficient the level of knowledge that the Educational Administration has of the social composition of its schools, which causes that, according to the authors, that school planning is done in this field “blindly”. Therefore, he proposes to deepen his study taking advantage of the school admission process and limit the percentage of students with special educational needs that can be concentrated in a school to a maximum of 25%. The document also states that a part of the resources that the centers receive are allocated according to their social reality, enhancing their “co-responsibility in balanced schooling and the fight against segregation”.