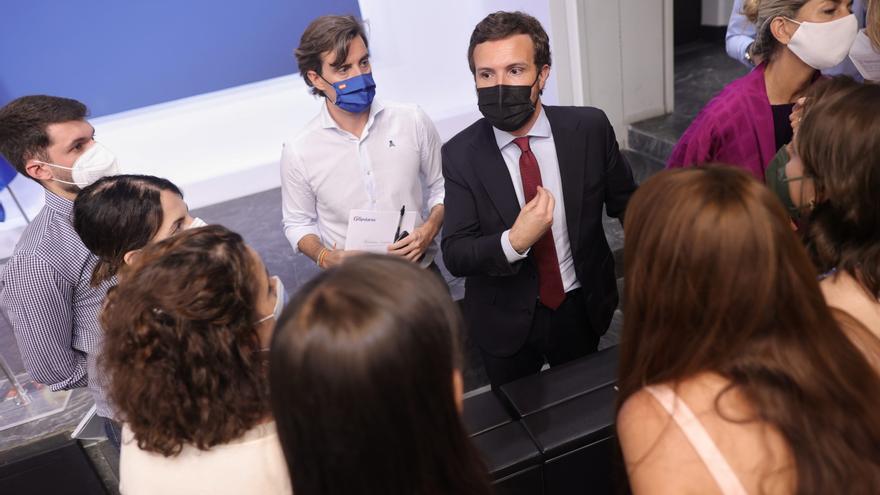 We are almost in August. The month in which politicians go on vacation, although some deny it and say that they spent most of the time in their office without anyone knowing. No more statements every day in Congress, at press conferences or in interviews in the media, at party headquarters or on visits to places that are only there to change the substance of the leader’s interventions. No more going around every day what was said the day before. No more races to find the headline with which to attack the opponent and appear prominently on radio, television and digital media. No more noise or dramatic moments. No more articles like this, which in a way should also be a relief to readers.

But before August begins, you have to fulfill the last ritual. The final offensive of everything you’ve already heard. The contrast between ‘everything is wonderful’ and ‘everything is a mess’. It is also not appropriate for journalists to complain, because the presidents of the Government usually give very few press conferences in which more than two questions can be asked. On Thursday, there was a double session with Pedro Sánchez and Pablo Casado, separated by two hours. Not that they stretched much. Sanchez’s lasted 48 minutes and almost half was consumed in his opening speech. Married spoke more, but it was almost worse.

To be fair, there was a triple session. Inés Arrimadas joined the press conference carousel and offered one of the latest products from the Citizens’ catchy slogan and phrase factory. He said that at the end of the term “Not even the scraps of Spain will remain”. Coming from the party that may have nothing left after the next elections – it is difficult for him to get a parliamentary group – this is a daring prognosis. As well as Arrimadas’ use of rhetoric as harsh as Casado’s, once he abandoned the centrist will to negotiate agreements with the government.

More than a weather vane moved by the wind, although anchored on a roof, Ciudadanos is now an empty plastic bag that the air currents push up and down or leave on the ground covered in dust.

Sánchez appeared in Moncloa full of optimism. The vaccination data and the employment data known that day allowed him to put together a speech in which positive expectations stood out. He did not lose his head, as when last summer in the Galician election campaign he encouraged the Spanish to go out and have fun. A few waves have passed since then and it is clear that there will be a long wait before victory can be claimed. It is obvious that his government, like all Europeans, was risking it in the vaccination process. There he did not want to sweep home: “The merit belongs to the whole of Spanish society.” Which on the other hand is true.

Fortunately, he did not repeat the forecast of a few months ago, when he said that Spain would reach group immunity by the end of the summer with 70% of those vaccinated. In the same way that an athlete crosses the finish line. It was not a correct or scientific calculation. Now he admitted that because of the Delta variant, 70% “may not be enough” to enjoy group immunity. Something more than possible.

Sánchez boasted that the objectives to which the Government committed itself are 32% fulfilled. Those of the coalition agreement with United We Can, 33%. As we are a few months away from the middle of the legislature, they seem to be a bit behind schedule. It will be that they have left the difficult for last.

Then it was Casado’s turn, who offered the deadly nightmare scenario that is the basis of his usual speech. His raw material left a lot to be desired, since he commented on several things that are not true. Of course, he said them with the utmost conviction and self-assurance. Not that that’s a relief. Isabel Díaz Ayuso also talks like this. He claimed for example that the EU “has blocked” European funds to Hungary, a prelude to what could happen to Spain, according to him, it is not really clear why. The European Commission has done no such thing. It has approved the plans of 16 countries, including Spain. He is now reviewing the plans of nine others, Hungary among them.

“It is not true that the PP has been blocking this (the renewal of the CGPJ) for three years,” he said. He has said it several times before and it is still false. Married refuses to agree to the election of new members of the judiciary, as established by the Constitution and under the terms established by the law in force. He dared to argue that in this matter “we must end fake news,” which is the same thing Donald Trump said when American journalists reported confirmed facts.

In recent times – we remember that before the PP said that it did not negotiate the renewal while Podemos intervened in it, although the one who dealt with the matter was the Minister of Justice -, Casado has gone on to say that the Constitution requires that the judges be the ones who elect a part of the Council. It is not true. If this were the case, all the Spanish governments after the 1985 reform, including those of Aznar and Rajoy, would have incurred in flagrant unconstitutionality with the complicity of the judges and jurists who were elected to form part of the CGPJ.

Casado has upped the ante and also now claims that the European Commission claims it. It is also not true. Another thing is that he does not want the current system of election by reinforced majority to be changed so that this does not interfere in his pressure on the Government of Poland.

Married disdained the importance of the latest job creation data with that run over verb in which he compares parameters that are very different. Sometimes the reality you drive just doesn’t exist. He came to say that they did not impress him much, because the Government has just hired 30,000 people for the public sector, as if it were a way of falsifying the figures. What the Council of Ministers approved was a call for public employment with that total figure. Presumably, Casado knows that candidates must appear first, take exams, and finally assign places. Don’t you know yet or were you lying?

For all this, the PP leader called for early elections. He already knows what the Spanish think. “Spain misses us,” he said on the same day that a judge of the National High Court sent former minister Jorge Fernández Díaz to trial, his number two of the Interior and the police leadership of the Ministry in the Government of Mariano Rajoy. All for the commission of various crimes with the intention of seizing the internal documents of the PP in possession of Luis Bárcenas. To steal them, to use a clearer verb, and obviously without any judicial control.

Regarding the prosecution of Fernández Díaz, Casado limited himself to saying that he is suspended from membership. As if it were someone whose name only sounded familiar. Someone who had a minor role in that wonderful Cabinet that Casado says we all long for. The last PP government allegedly made the Ministry of the Interior the center of a criminal operation. Spaniards surely miss seeing commissars dressed as criminals again.

Tags: acts, Catalogue, exit, false, give, Holidays, I had, Married