Winter invites you to take refuge in the comfort of the living room, but this year we are determined to make the most of time and we refuse to hibernate. In fact, traveling in this season has its advantages: even the most tourist destinations are less crowded at this time of year, urban centers prepare for Christmas and dye their streets with a special light and beauty and cultural agendas reactivate their offer with attractive proposals to visit.

All that invites you to pack your suitcase right away! It is the perfect time to discover new destinations or rediscover those places where we were happy. And we do it with an added incentive: to stay in the very special rooms of Paradores, which guarantee an unforgettable experience and are the perfect refuge to return to after the day of sightseeing. This is our selection of inland destinations to travel to this winter.

The town of Arcos de la Frontera, located on top of a hill, is the gateway to the White Villages of Andalusia. Walking through its old town, through very narrow and steep streets and under ancient arches, we will find monumental jewels such as the Castle of the Dukes, the Puerta de Matrera and the remains of the walled enclosure, palaces and stately homes, the Basilica of Santa María or the church of San Pedro, among many other temples and convents. 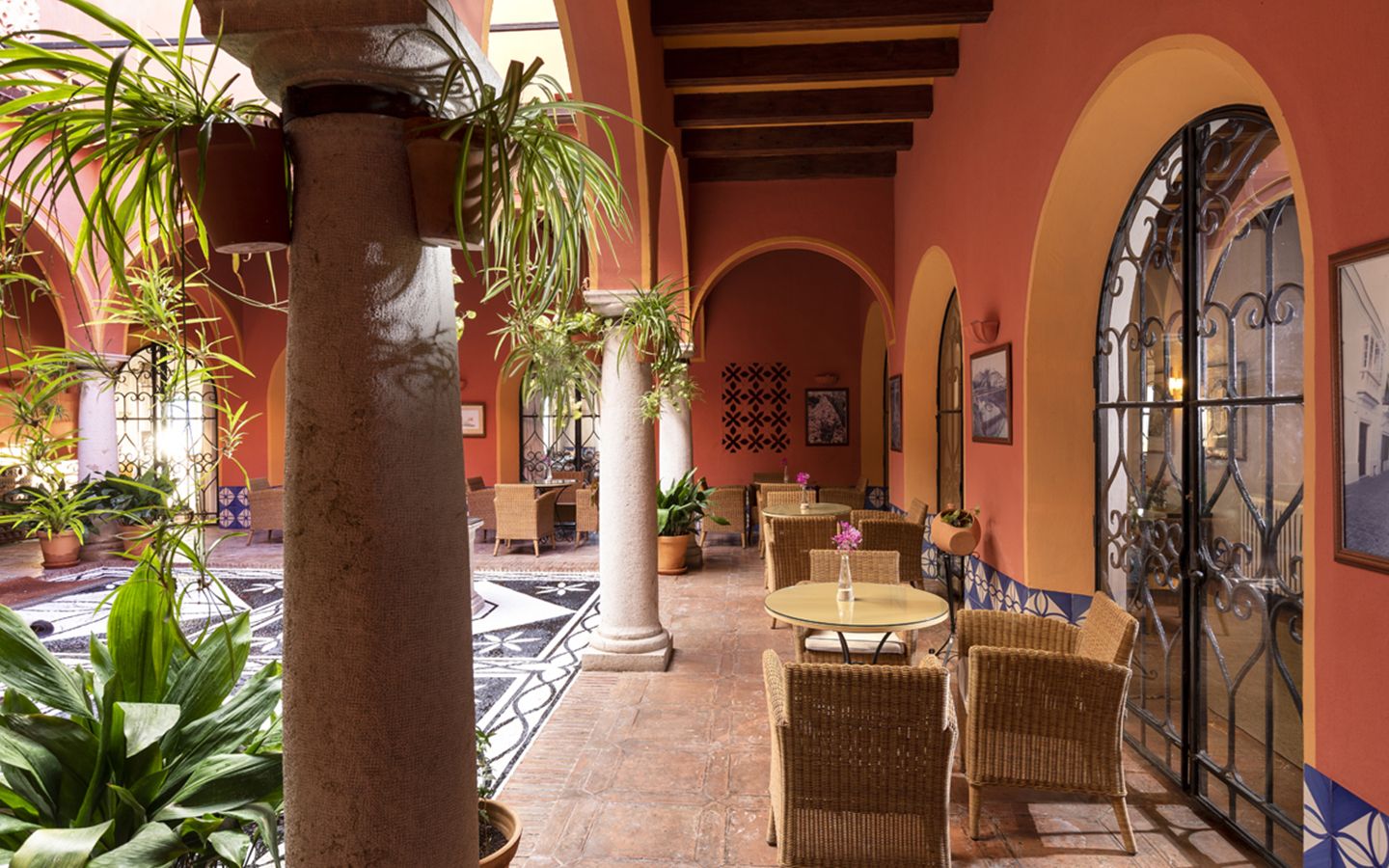 In the Plaza del Cabildo is the Parador of Arcos de la Frontera, in what was the Casa del Corregidor. It is a building with classic southern architecture, with an Andalusian patio in the center of the hotel that distributes light and a friendly climate through the rooms, living room and dining room. It also has a gastronomic offer based on the most representative products of Andalusian cuisine, such as tapas, portions and traditional dishes, with proposals as suggestive as corvina a la Roteña, oxtail or Iberian sirloin with Pedro Ximénez.

Cáceres, art and history at every step

Three hours from cities such as Madrid or Seville is the monumental city of Cáceres. Witness the passing of history like no other, its cobbled streets contemplate its Roman, Moorish and medieval past. Added to its historical appeal this year is the new headquarters of the Helga de Alvear Museum of Contemporary Art. Inside there is one of the most important private collections of contemporary art in Europe. 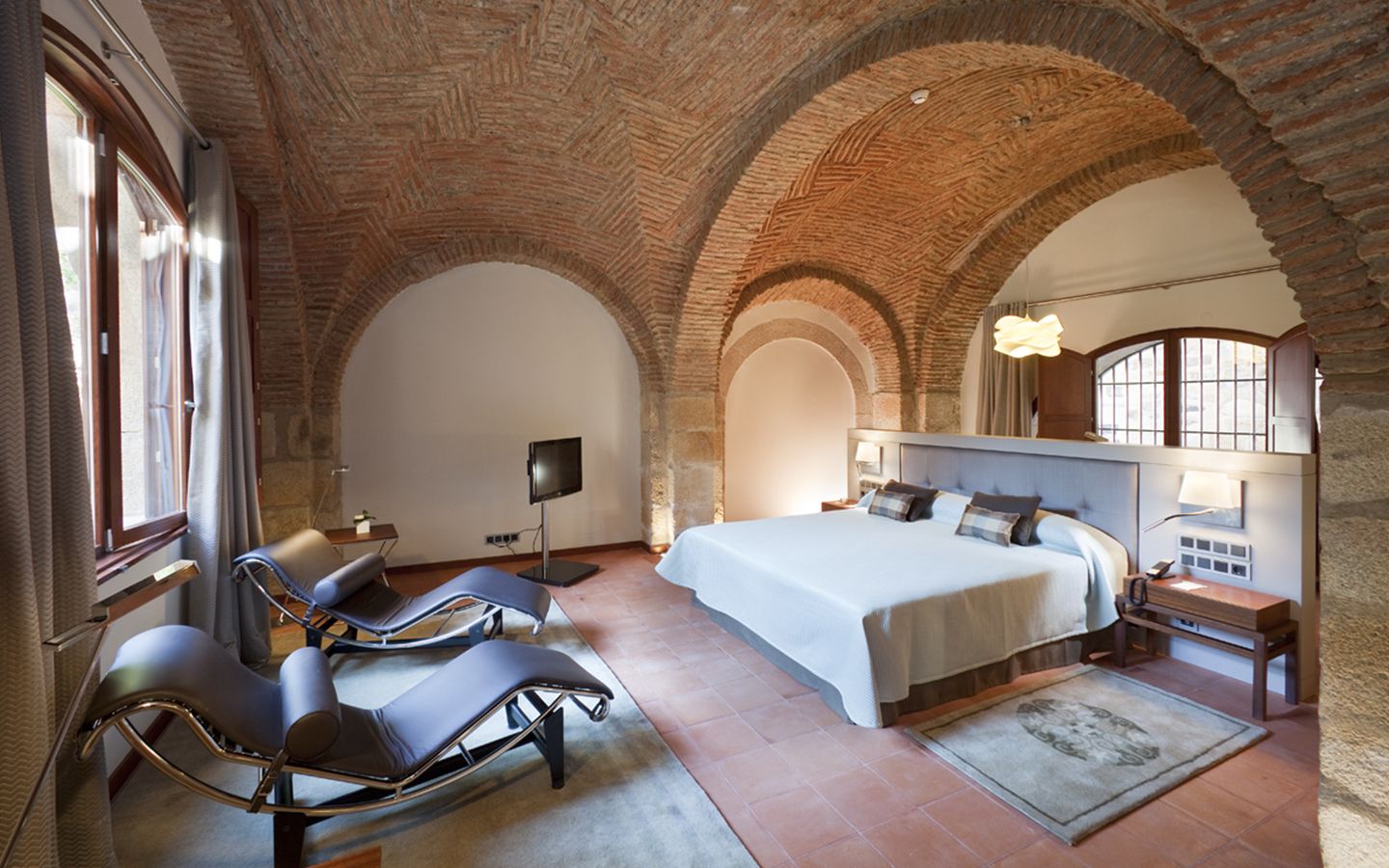 In the center of its old town, occupying a Renaissance palace, is the Parador de Cáceres. This renovated Parador combines tradition and modernity, is perfectly equipped with new technologies and integrates environmentally friendly elements such as high-performance boilers or air conditioning control systems. In the restaurant we can enjoy delicious dishes such as Iberian sirloin with Casar cheese, red veal and products derived from Iberian pork.

Located in the southwest of the province of Salamanca, a few kilometers from Portugal, Ciudad Rodrigo is part of the Network of the most beautiful towns in Spain. Its walls hide an invaluable historical heritage. Do not miss its main square, town hall, cathedral, churches, castle, palaces and manor houses … And, of course, the wall itself, which witnessed the War of Independence. 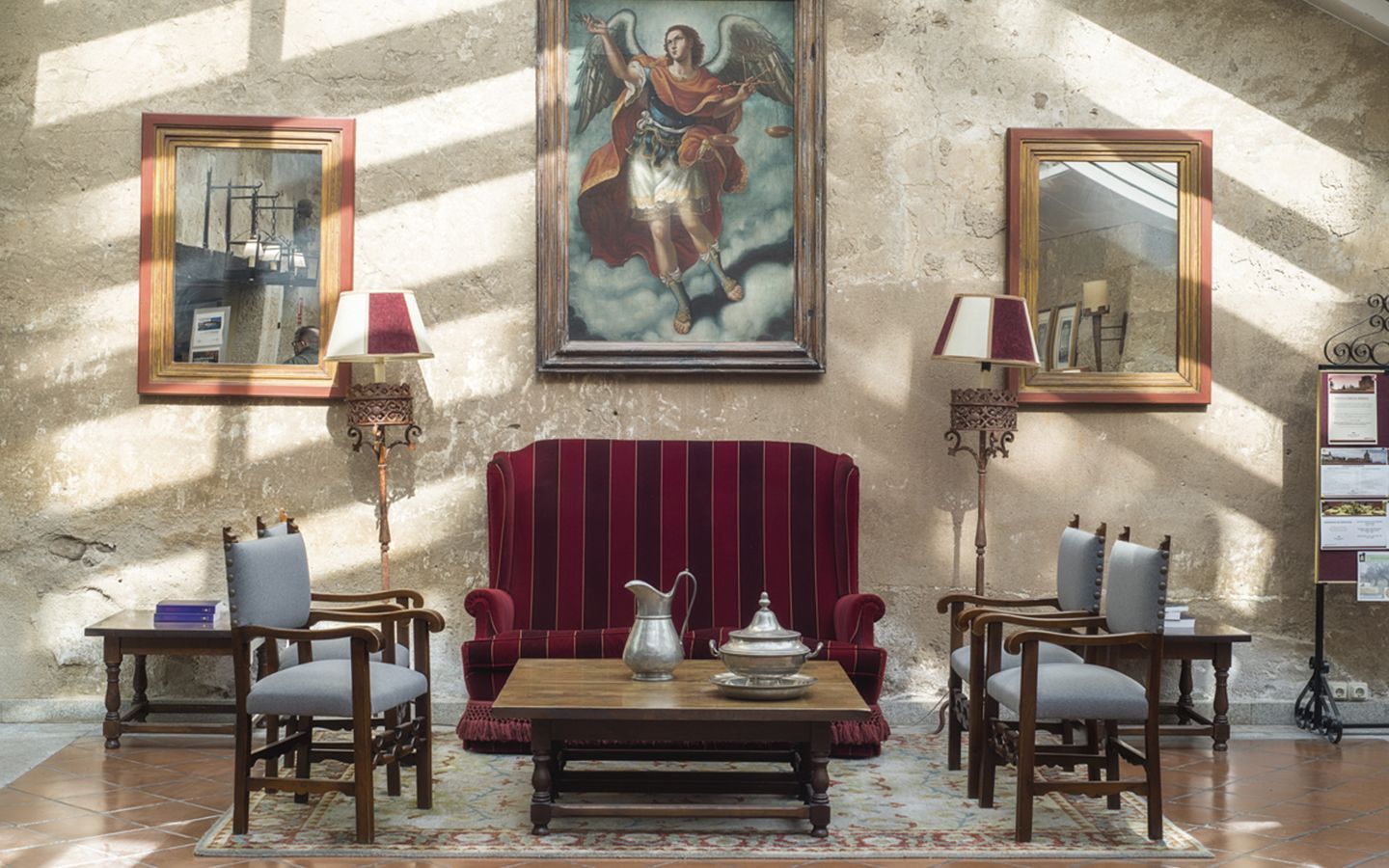 The Parador of Ciudad Rodrigo it is located in the old castle of Enrique II de Trastamara. An impressive defensive complex that presides over the Torre del Homenaje and preserves the battlements and walls from which the border with Portugal was guarded. In the restaurant you can taste the typical charro cuisine, such as sausages or roasts. Among the most recognized dishes on its menu are the morucha veal burger stuffed with Arribes cheese or the Farinato with yolk roasted at low temperature with meneás potatoes.

The magnificent castle with the imposing presence of its battlements, towers and passageways is the emblem of this town and, of course, an absolutely essential visit. But the medieval soul of Olite extends much further, through its streets and squares flanked by robust manor houses with coats of arms on the facades, Gothic arcades, medieval galleries and splendid churches. 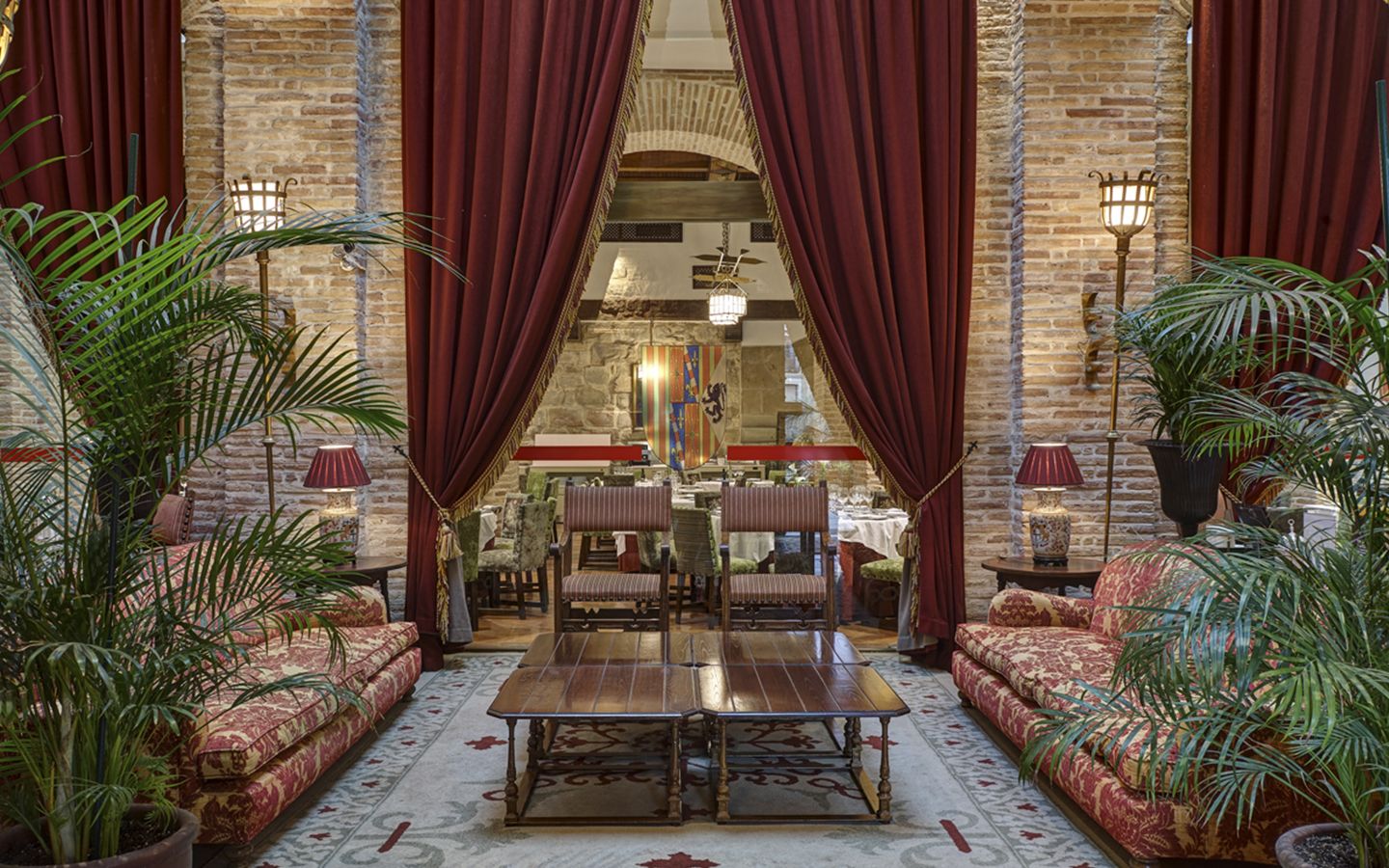 Next to it is the spectacular Parador de Olite, a unique building installed on the old palace of the Kings of Navarra in one of the most beautiful Gothic-civil complexes in Europe. The hotel is located in what is known as the Old Palace, where it offers luxurious rooms and a lush garden where you can enjoy the wine tradition of the area.

Úbeda, next to the neighboring town of Baeza, offers one of the richest Renaissance heritages in Spain, comparable to the most beautiful Italian cities. The tour should start from the Vázquez de Molina square, where the Sacra Capilla del Salvador stands out, one of the most beautiful works of the Spanish Renaissance. There are also other of the most emblematic buildings of the town, such as the old Granary, the Bishop’s prison, the Town Hall and the Basilica of Santa María de los Reales Alcázares. 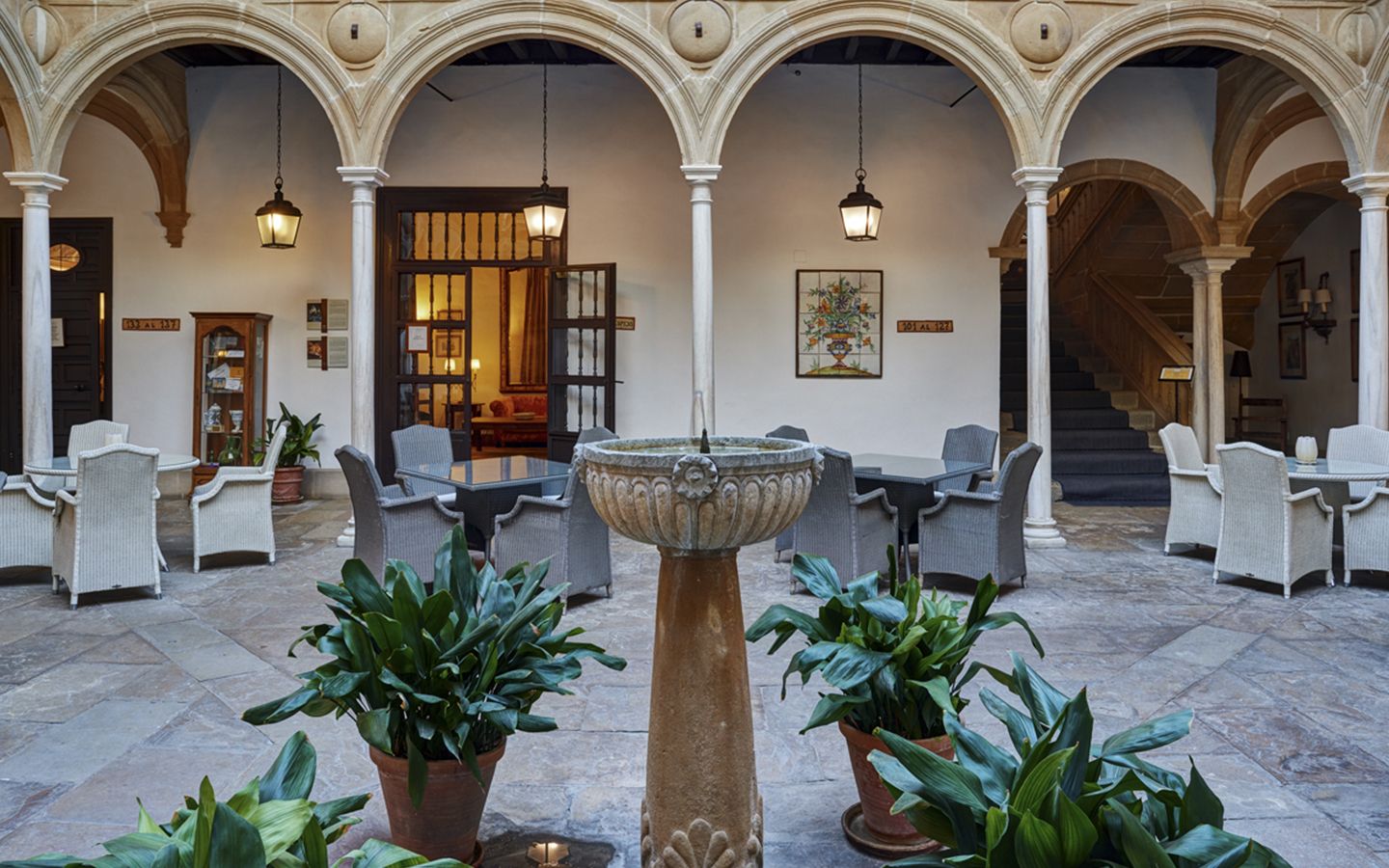 In that same square, which is the monumental heart of the city, is the Parador de Úbeda, which was originally built as the residence of the chaplain of the funeral chapel of El Salvador and the first palace to be converted into a Parador. In the building, of Renaissance architecture, its façade and the splendid central patio stand out, one of the most beautiful in Úbeda. The Parador is part of the architectural complex that earned the city the title of World Heritage City.