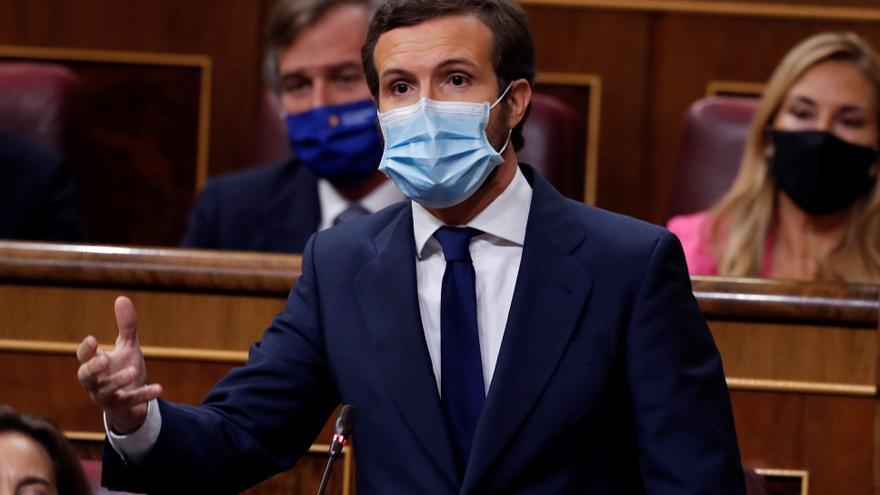 The campaign launched by the leadership of the Popular Party To try to establish itself as the only political force that defends the monarchy, this Wednesday marked the control session of the Government in the Congress of Deputies. The leader of the PP, Pablo Casado, has insisted on accusing the Prime Minister, Pedro Sánchez, of “opening an institutional crisis.” The popular president has considered that “the monarchy was voted” in Parliament and that Justice “is administered in the name of the king”, not as in the “dictatorships of those who finance their partners,” he told Sánchez.

In his reply, Sánchez has assured that he does not want to enter into the “weekly provocations” of the head of the opposition, although he has wanted to send him a warning: “He stands as the defender of the Crown and of the Royal Household, but be careful, because before you stood up in defense of national unity and look at how we ended up, “stressed the chief executive, alluding to the independence process opened in Catalonia and the referendum of October 1, 2017, which took place while the PP was governing.

Previously, Casado had urged Sánchez that “if he wants to change the regime, he has to present a constitutional reform and not degrade.” “If you have a minimum of institutional dignity, you must cease your radical government and break with your partners who announce another blow to legality. The problem is not the Constitution, nor the monarchy, nor Europe, nor the opposition. The problem is you , which is degenerating the institutions and ruining the Spanish by a handful of votes, “the PP leader has snapped to the Prime Minister.

Sánchez, next line, has asked Casado to “stop using hyperbole in his interventions.” “I offer him unity, institutions and dialogue,” Sánchez told him, who recalled the “agreement” reached on Tuesday between the Government and the Community of Madrid for the management of the pandemic. Once the scuffle was over, sources from the PP national leadership have denounced that “Sánchez has refused to disavow the members of his Government who have attacked the head of state.”

During the control session, Sánchez also submitted to the question of the PNV spokesperson in Congress, Aitor Esteban, and the EH Bildu spokesperson, Mertxe Aizpurua, who has offered to the President of the Government to agree on the General Budgets of the State that the Executive is negotiating between PSOE and United We Can and that it plans to present in the coming weeks.

“Our will is to dialogue and, where appropriate, agree on Budgets that are good for the majority of society and move us forward. A tremendous crisis is coming and not even a loophole can be left to the right,” Aizpurua settled.