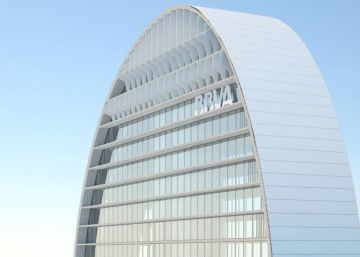 The ECB is a machine for injecting liquidity into banks. The third edition of the free money bar to grant loans (TLTRO) will run until at least March 2021. The one on June 18 was a success, with requests from European entities for 1.3 trillion. BBVA requested 35,000 million. And now he prepares collateral to attend the following appointments. She has just created securitization bonds for 1,743 million that can be exchanged for hard cash at the window of Christine Lagarde, according to a document sent to the CNMV.

The ECB has relaxed the requirements of the assets it admits as collateral to deliver fresh money to the financial sector and for it to inject it into the productive fabric to alleviate the effects of Covid-19. The Central Bank keeps these assets as collateral in case any problem arises.

But the liquidity buffer is never enough, and the banks have set to work so that they never lack. BBVA’s latest move is along that line. It has grouped credit rights derived from financial leasing contracts, with which it finances and transfers the use mainly of real estate, in exchange for an interest. It has transformed these contracts into bonds, valued at 1,743 million, which it will not sell on the market, but will keep on its own balance sheet.

In case you need it, the bank can go with them to the ECB in one of the auctions that it organizes in its different modalities: the classic weekly auctions (MRO), the special emergency auctions due to the pandemic (PELTRO), the longer duration auctions. to seven days (LTRO) and the remote controlled to give credit (TLTRO).

The bank chaired by Carlos Torres Vila, which today publishes results, was one of the most intrepid in that of June 18, when it requested 35,000 million from the ECB, which not only will not cost him anything, but will take advantage of them. You will earn a 1% return if you maintain your current loan volume until June of next year.

The next discounted liquidity auction will be held on September 23, and there are two others on the calendar: in December this year and in March 2021. The ECB is expected to keep this liquidity-free bar beyond that date.

BBVA was not the only entity that has reinforced its liquidity buffer. CaixaBank created securitization bonds for 3,550 million at the end of June, also to take to the ECB.

The objective of liquidity auctions is for banks to grant loans. However, they return part of the money to the ECB, which charges them 0.5% for keeping it. After the June TLTRO, the money kept in the Central Bank safe shot up to almost 460,000 million. But they have already mobilized a part: now they have 300,018 in the deposit facility.