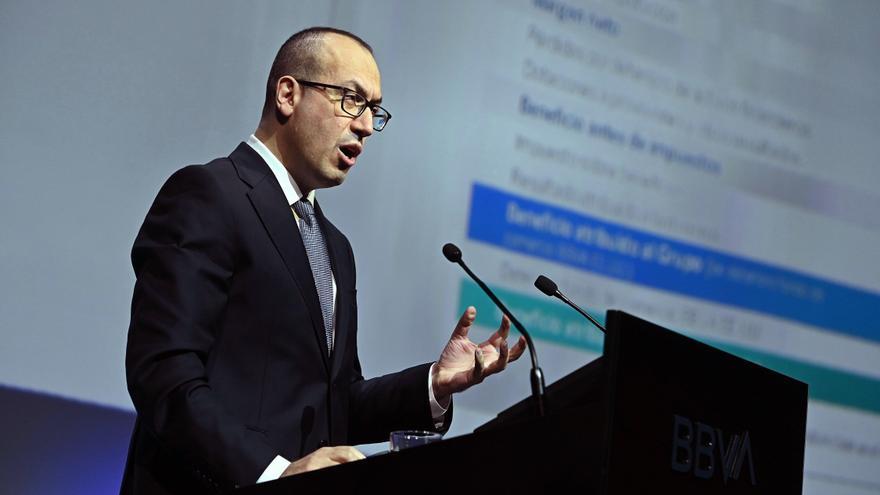 BBVA announced this Friday the results of its first quarter of the year in which they have earned 1,200 million euros, which contrasts with the losses that were achieved in the same period of 2020, when the arrival of the pandemic caused the taking of provisions millionaires. The data is already almost 4% above the data for the first three months of 2019, when the impact of the health crisis did not exist. However, despite the progress in its results, the bank maintains the economic justification of the ERE that is negotiating with the unions.

The bank's CEO, Onur Genç, has indicated that "the viability of the future, including employment, must be guaranteed" even if that means taking measures like this. At the bank's results press conference, the manager justified that the ERE is a "reaction" of the entity to the 50% drop in the operations carried out in the branches. "We have to do it even though we are focused on people," the executive stressed. The bank has already informed the unions that the ERE was carried out for economic reasons.

Genç, after being asked what has changed compared to past times in which the bank said that it had mechanisms to improve efficiency without an ERE, has assured that the answer lies "in the data" and in reducing the use of the network physical. In addition, he pointed out that operations carried out digitally have "one-tenth" the cost of those carried out in the bank's branches. "That is why it is so important that we act," he said.

Asked if there would be room to continue reducing the number of layoffs during the negotiations, he did not want to comment, but recalled that since they announced the restructuring process they made it clear that they would work with the unions to minimize the impact as much as possible.

Regarding criticism about the high salaries of managers, some from the Minister of Economy, Nadia Calviño, Genç explained that they respect all opinions, but recalled, as his colleagues from other entities do these days, that the ECB has very detailed regulations on the salaries of managers and their composition.

The executive has been hopeful that, despite the social rejection that these decisions produce, they will not affect the reputation of the bank. "It is true that all banks have to focus on improving their reputations and during COVID all banks have been part of the solution and I hope that this will happen more," he assured. Although, he has recognized that customer satisfaction with banks in Spain is "lower than in other geographies." "I hope that the banks know how to do better," he said.

The bank's profit in its Spanish subsidiary was 381 million euros during the first three months of the year, compared to losses of 130 million euros that were obtained in the same period last year. The bank has closed this period with an improvement in income of 8.9%, to 1,646 million euros. Fee and commission income grew more than 8%, compared to the drop in interest income. The entity has reported, yes, that in Spain there has been a slight increase in non-performing loans (from 4.3% of the total, to 4.4%). "We want to be very cautious. Although we do not actually see any deterioration in this portfolio, we have wanted to classify some of the mortgages with default in Spain as doubtful," Genç explained.